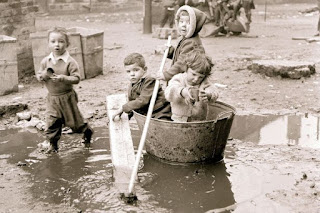 It is hard to get drunk on a pub-crawl in St Davids, because there are only three pubs.
One of them, however, has an interesting hand-dryer in its toilets. It roars like a jet engine and flays the skin as it dries.

I enjoy hand-dryers – innocent enjoyments for simple minds, I suppose. I'm not talking about those where you slip your hands down into a glorified letter box. No, the ones I love are those that blast down on the hands.  These cause the skin to pucker and move; it’s like watching low dunes ripple in wind and beats much of what is on TV. Sometimes I linger longer than I should until my hands are super dry and I feel like I've just experienced a Turner Art Prize Installation.


I read of a man beating a seagull after it stole one of his chips. He grabbed the bird by its legs and bashed its brains out on a brick wall. In the great scale of things, pretty small beer. Far more evil things go on in this world, but whether it’s seagulls or holocaust an assertion is made – an act of faith as much as anything else: There cannot possibly be a God to allow such things.

Without doubt, the holocaust and similar events far transcending the fate of a seagull have turned many into atheists. They pose the question:  how could God allow such a things to happen? And by doing so suggest that the presence of evil negates the existence of God. They highlight the apparent contradiction of God being both all-powerful and all good ie if God allows evil, he can’t be all good and, on the other hand, if he’s unable to prevent evil, then he can’t be all-powerful.

The traditional answer is that we were created with freedom of will and with it the responsibility of moral choice. We can choose to do good or bad things. Like bashing in the head of a seagull.
But, one could argue, there is nothing to stop God extending a feathered hand and protecting that seagull. The man lamenting the loss of a chip was given the choice to do a bad and foolish thing, but the seagull didn’t suffer from it.

The question then arises, what would happen if there were no evil in the world? And, on a social and political level, the further question. Who gets to define what is evil? — a pertinent point when drugs, microchipping and the possible spread of the Chinese concept of ‘social value.’ We all ready accept ‘credit scores,’ why not ‘conformity scores.’  Of course, if we were robots the concept of good and evil would cease to exist. We would do as we were programmed to do, truly ‘following orders.’ And in an alternative universe, God could have created us so. But creatures stripped of meaningful choice cease to be moral beings.

So, back to this world and the feathered hand of God protecting innocent seagulls. (Well, not so innocent. It stole a chip.) Where would it stop, this interventionist God? Are we to be protected from every consequence of a bad or foolish decision? From the consequences of every natural disaster or virus—God, clad in Lycra and cape, zooming from crisis to crisis? And if we lived in a world without crisis or challenge or meaningful moral choice, what exactly would we be?

A few nights ago, I had the devil’s own job getting asleep. It happens now and again, usually in the small hours of the morning between two and four, so perhaps I should qualify that by saying ‘getting back to sleep’. No problem getting there. Returning is the problem. And I’m desperate to return, if only for the dreams.

Last night I dreamt of the Tennessee Cheese Wars. My wife, usually less trusting, asked me whether there ever was such a thing. No, I said. I’m fairly sure that there hasn’t. Then again, who knows in the future? Was it prophecy?  This world is getting crazier by the minute, and I might well head a flotilla of Tennesseans, furiously paddling canoes burdened with Edam and Camembert pursued by lactose starved, tomahawk waving Indians.

But those nights I can’t return to my dreams . . . I just lie there an hour or more, switching from one side to another, checking the clock, and uttering that age-old prayer: ‘Why me Lord?’

I want to go asleep, and the process is akin to a slow moving football match. . . the goal is in sight but I’m shadowed by a tenacious defender. However I weave and twist and turn, it’s always there, soft and black and blocking my route.

The worst bit of all is being on the verge, and in my experience there are two kinds of verge: the ‘cliff edge’ verge when you feel you’re so near the edge… you just have to roll off…and then some invisible but bloody-minded membrane bounces you back, and you open your eyes—shut them again quickly to find the cliff edge has vanished.

The other verge is what I term the ‘hammock.’ As the name suggests, you’re lying there comfortably warm when the bottom slips away taking you with it. That’s my favourite, the one I normally go to sleep by—but rarely at 2.39 in the morning.

On this particular night, seeking verge after verge, I finally got up 4.49 in the morning. It was fairly pleasant at first—a warm fire, hot tea and a third rate Stephen King book ‘Bag of Bones’. By ten in the morning I was a wreck and went for a bath.

That was weird in itself. I never have baths—well at least rarely—but there I was, lying in hot water and wondering what I was doing there. On the floor, I noticed a supermarket magazine – the Waitrose Weekend. Well, it had to be better than sitting in hot water staring at tiles. On balance, it was. I read Mariella Frostrup’s take on the menopause, Fi Glover’s opinion – I’ve forgotten on what, and learn’t many interesting recipes: sausage rings soaked in cider, stuffed with chopped apple and pine nuts, the best way to cook salsify, a recipe for Larb noodles with passion fruit chilli dressing, another for Hoisin Tofu and rice burritos. I was on the verge – the cliff edge one—but the water was cold and I got up.