The Parmenides Paradox: a conclusion in waiting

Parmenides once ‘proved that if Achilles gave a tortoise a hundred-metre start  he’d never be able to catch up to the tortoise. In similar vein: if Homer wishes to walk to the end of the path. Before he can get there, he must get halfway there. Before he can get halfway there, he must get a quarter of the way there. Before travelling a quarter, he must travel one-eighth; before an eighth, one sixteenth; and so on.

Such paradoxes come to mind as I reach the final chapters of the last book in my trilogy – ‘The Gift’. The close I come to the conclusion, the slower I am and the more it recedes.

I have to finish it because I think it’s my best work, and it’s dominated three years of my life. It also has a USP. No, me neither, until I looked it up: Unique selling point. The agent, John Jarrold told me that, intrigued by how a cosy family saga is fairly soon subsumed by the occult.

The first book, ‘The Gift,’ takes us from an Edwardian Liverpool slum to the high society of 1927. Its heroine is Elizabeth McBride, and through her eyes we experience Aleister Crowley, the Morgans of Tredegar and a young Adolf Hitler. Halfway through the book we realise the enormity of her gift.

The second book, ‘Bloodline,’ traces the kidnapping of her sister, Elsie McBride, her incarceration in a soviet prison, and her subsequent corruption by powerful Satanists. The stage is set for a duel to the death—or worse, between the two sisters.

The final book, ‘Bloodfall,’ has proved the trickiest. Whereas before it’s been immense fun, weaving in historical characters, and making sure they’re placed where they should be and at the right time—inserting fiction in the gaps, the challenge this time has proved far harder and complex.

Writers are often divided between ‘plotters’ and those who ‘write by the seat of their pants.’ Most, I suspect, fall somewhere in between. I usually know up to three chapters ahead what I’m doing. Beyond that it’s ‘here be dragons’ territory, where  I have to sit down and map what comes next. Sometimes I’m stuck and have recourse to the Raymond Chandler strategy: ‘When in doubt have a man with a gun come into the room. In my case it’s demons.

So, the final book—Checklist:
Period setting  — Check
Evocative?        — Check
Plot                    — Check
Tension             — Hmm. Needs more work. It’s a bit ‘stretchy’ at the moment, like bread dough before the final bake. Assuming I succeed where Achilles and Homer failed—in my case reach the bloody conclusion— it’s just a matter of editing: cutting the flab . . . and perhaps introducing demons with guns. Downton Abbey, perversion, Nazis and Satanists—what’s not to like?

No great chunks of prose this week. Instead, a thought and a question.The first two pictures show the houses that I grew up amidst. The first one was taken in the 1960s, the second in 1974. Most have been knocked down now, I mean we're talking about the C21st, though a surprising number remain.

The question is what has replaced them and would you like to live in them? It's a tricky question because it involves conflicting perspectives. The modern equivalents are eco -friendly and well insulated boxes. The old ladies, though not perhaps the girl playing football would likely prefer them to the cold, draughty houses behind them.

On the other hand my sense of loss with regard to these old terraces may well reflect self-indulgent nostalgia. Notwithstanding that, for me, the one represents community and character, the other comfortable isolation.

Is there a right answer? 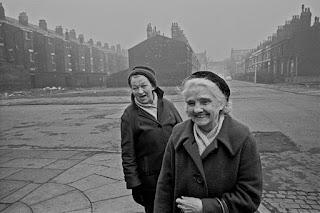 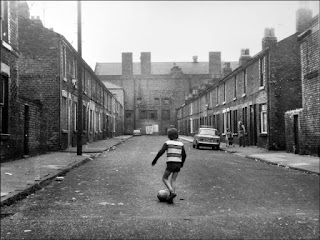 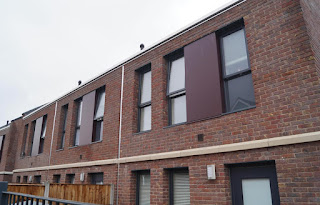 Just down the road from where we used to live was an abandoned building where many years before a man had been brutally murdered. Though boarded up, it was the natural place for small boys to wander through, access being gained through a small gap in the back. We convinced ourselves a ghost lurked behind every door, in the shadows at the top of the stairs, immediately behind our backs waiting to pounce; and we never stayed very long. There were exceptions: ‘the smokers.’ They congregated in a loose circle sharing one or two cigarettes between them like small Indian war pipes. These were the ‘tribal elders,’ the shamans in communion with shadows that might at any moment take form. And they came back with stories that made the house even more terrifying—and attractive.
Along the ghost-ridden Monmouthshire-Herefordshire borderlands ghosts are real whether you like them or not. A case in point is Black Vaughan of Hergest  Court. In the late 1980s John Williams, a tenant farmer, talked of the ‘prickly feeling’ that went up his back on hearing the pattering of huge paws in an upstairs room and a little later saw hound-like shadow passing by him enroute to the inner hall.
There are still people in Kington who refuse to go down the lane to Hergest after dark. And with good reason.
During World War II a cyclist passing Hergest Hall saw: ‘ this enormous hound which he’d never seen before and never saw again. The hound had huge eyes…and he had the feeling that there just wasn’t something real about it. (Bob Jenkins, local historian) and psychic disturbances continue to manifest in Hergest Court.
The cause of all this is reputed to be a C15th ancestor of the Vaughan family, who fought in the War of the Roses and whose headless body was brought back to Kington to be buried next to his wife Ellen Gethin (‘the terrible’) 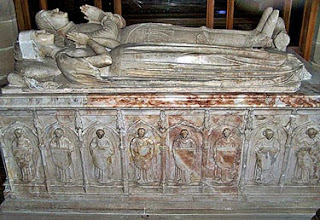 From Morwenna's Tower
Some accounts suggest that Thomas Vaughan was both a warlock and tyrant, but whatever the case soon after his death the ‘disturbances’ began. A ghostly bull rampaged through Kington disrupting church services and over throwing carts during Market Day. It grew so bad an exorcism involving twelve priests was enacted. During the ceremony Vaughan appeared in demon form and was imprisoned in a snuff box and buried under a stone at the bottom of a pond that fronts Hergest Hall.
But the hound remained terrifying residents and acting as a harbinger of death in the Vaughan family. It’s not surprising perhaps that the last residing Vaughan – the Reverend Silvanus Vaughan—died in 1706.
In 1987, a particularly brave Vaughan—Jenny Vaughan, a Midlands’ business woman—came to Kington to mug up on her family history. She didn’t see the hound – which would have heralded her death— but she did see the bull in the church it had once haunted. In her own words: ‘The inside of his nostrils…were very, very red, like a racehorse when it has just stopped running. And it was wet. It was dripping moisture or something on the ground…I’m a hard-headed business person but I can’t deny it. I’ve seen it.’
And as for the snuff box…A few years ago the pond’s water level dropped significantly. A large stone was glimpsed in the mud beneath. Some tried to persuade local farmers to dig it out in search of the snuff box.

From the sublime to the ridiculous in a small Lanarkshire house we have the story of a levitating chihuahua. Read it here

I recommend buying Merrily's Border by Phil Rickman, which is full of such stories
Posted by Mike Keyton at 05:36 6 comments: