The Impulse control of a Bonobo monkey

I sense a ‘clear-out’ looming, and yes we have a great many things we don’t really need. In such instances ‘stuff’ which may once have cost a pretty penny becomes less important than space. I am hopeful though that one battle has already been won.

I have rooms full of them and the main accusation – that there are books I will never again read—misses the point entirely.

You may as well argue the case for recycling  a Dorset cliff-face for road building, and stuff the palaeontological record. Fossils? Who needs them? We have living breathing animals. Archeology? Waste of time. Why preserve long forgotten Roman mosaics when there’s a housing estate to be built?

Yes, I can appreciate a flaw in the argument. My book collection may appear small beer compared to a major palaeontological find, or an exquisite floor mosaic from 200 AD. But it is not small beer to me.
Every one of these books has a memory or story behind it – even those books I’ve barely read or skimmed.

When I was a student in Swansea, I scoured second hand book shops and built up a good ‘Everyman’ library of some pretty obscure books: The Letters of Lady Mary Montague 1709 – 1762, The letters of Oliver Cromwell, The speechs of William Pitt the Younger, Selected Speechs on Public Questions by John Bright (now that is a dull book) Holinshed’s Chronicles, The Sermons of Hugh Latimer, The Speeches of Disraeli, Ruskin – I could go on to list all fifty-two I eventually bought during my time in Swansea but I’ll spare myself and you from the misery. 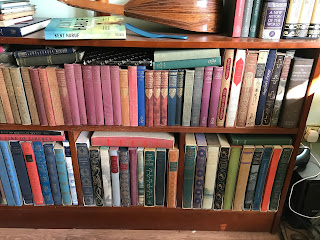 Now, I have read some of the more interesting letters from Cromwell, I’ve even, to my shame and in private, read aloud one or two of William Pitt’s war time speeches. They taught me one thing; the man had fantastic breath control with his sentences in search of an ending.  I’ve sampled Hugh Latimer’s sermons, and enjoyed the robust cadance of C16th speech. But I’ve read none of those books from end to end,(other than Lady Montague’s letters – she’s a star)  and it’s likely I’ll never open their pages again. The point is those fifty-two books bring back memories of Swansea and the aspirations of an earnest student.

If I go back further in the geological record, you’re looking at my childhood and early teenage years, pulp scavenged from church bazars, and books I actually bought. No way could I get rid of my James Bond paperbacks, my Michael Moorcock, Robert E Howard, H P Lovecraft collections, or my complete set of ‘The Saint’ (yellow paperbacks) by Leslie Charteris. 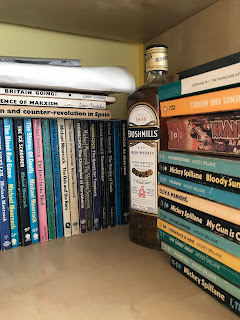 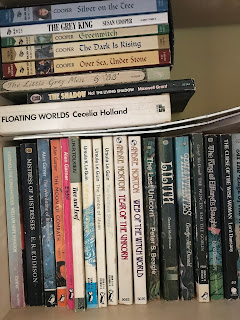 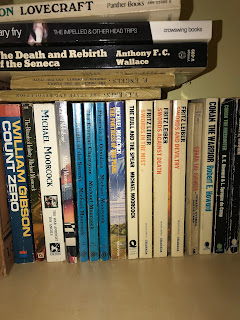 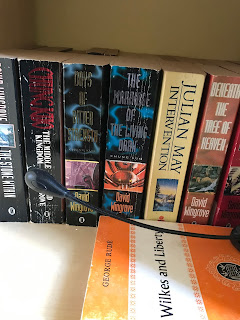 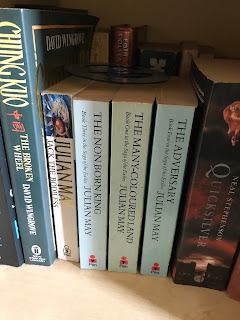 With regard to the latter, I cheated. I ended my childhood with about a third of ‘The Saint’ books, but Heaven took pity on me. God is a bibliophile. Harewood House has a wonderful second hand bookshop close to the stables. They had every ‘Saint’ book, and I was in heaven. Now was I buying them with the intent of sitting down and reading them all from cover to cover? Quite obviously not.  I was buying back a fragment of childhood. I’d do the same if I ever found a complete set of Biggles! 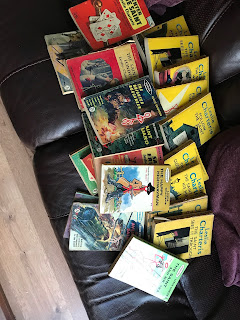 For those lucky enough to have been born in great Northern Cities like Liverpool, you lived and breathed magnificent Victorian buildings that uplifted the spirit without you always being aware of it. You never felt obliged to explore every floor of those buildings to appreciate them as monuments. Only years later you realise how privileged you were. Much the same is true of books.  Every closed book is a world waiting to come to life. Now I am richer I can afford (and so can a generous wife) fine folio editions of the works of Anthony Trollope. I feel privileged to have them – not because I feel obliged to re-read every one of them. 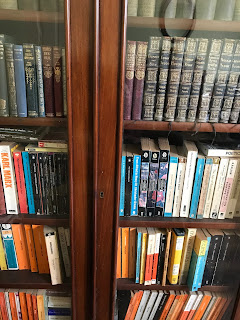 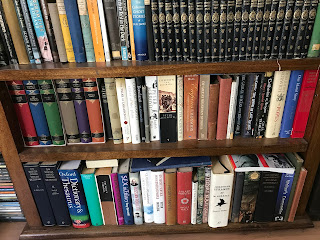 I did my M. A. on Anthony Trollope and English Landed Society, and in the process read about thirty of his forty-seven books. Paperbacks, heavily annotated and most of them lost. In this respect my Folio editions of Trollope’s Barchester and Palliser series are monuments to a wonderful time in my life. Yes, I will re-read many of them – but I don’t have to. That is the point – other than the fact I’d need another life to read all the books I’ve acquired over the years. And have I mentioned my kindle yet – 900 books or more? What with the daily Kindle deal offering books for 99 pence and a click, the temptation is often irresistible, especially for one with the impulse control of a bonobo monkey: Edward Rutherfurd’s Sarum, London, New York, and Ruska at 99 pence each? I may never read them, but they’re there, and it gives me great comfort. I guess I’m a glorified squirrel, but at least my nuts are neatly shelved; an unfortunate image.
Posted by Mike Keyton at 07:53 2 comments: 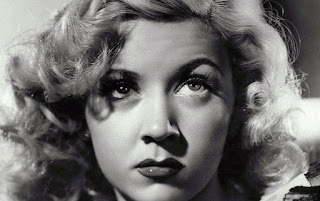 Last week we went to the Savoy, the finest small cinema in Wales and a mile’s walk from where we live.  The film was  Film Stars Don’t Die in Liverpool and, predictably, as the film came to an end there was a lump in my throat, perhaps even a tear in the eye. That doesn’t mean anything in itself. I’m a bit of a sob-bucket. A well designed advert has much the same effect – to the amusement of my daughter and wife.

The film itself is improbable but true and with a nice irony. In ‘Hollywood world’ it remains the norm for aging male stars to be paired off with young and attractive actresses. In this true story it is the reverse —the real life Gloria Grahame, still highly sexual at fifty-seven, cops off with a young man in his twenties. (Although it must be said, Gloria had form in this department)

An added bonus for me was the film’s location, and I was able to walk the streets alongside its stars.

I walked with them into the Philharmonic – in the film, doubling up as London pub, into Ye Cracke where father and son discuss bacon butties and Gloria Grahame – in fact I’d sat on that same seat more than once. And then there were the terraced streets, those glorious slabs of red brick and shadow that add magic to Liverpool – especially at night, especially in the rain

I knew nothing about Gloria Grahame, nor some of the weird and wonderful actresses who wanted to portray her in the film: Joan Collins, Whoopi Goldberg, and Madonna. I’ll leave you to decide the weird in those three. Thank God they went for Annette Bening.

I did discover that, for her, the #MeToo and designer black dresses came sixty-seven years too late.

In 1950 she was offered the lead in ‘Born Yesterday’ but because she wouldn’t ride unaccompanied in the back of Howard Hughes’ limo, the company immediately dropped her. Like many women of that era, she was bullied into needless plastic surgery, although her own vanity played a part too.  And, like many of her male stars, she had a strong sexual appetite, culminating in a scandal that shocked Hollywood. In time the 'machine’ against her in stories that ‘stuck.’ This is perhaps one of the fairest assessments. 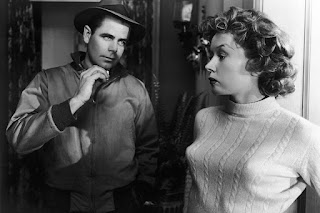 I’ve since mugged up on Gloria Grahame, her performances in ‘A Wonderful Life’ and Oklahoma; noir films like Sudden Fear alongside Joan Crawford and Jack Palance, and In a Lonely Place with Humphrey Bogart, The Big Heat and The Bad and the Beautiful

It's my ambition to see each of these films with Film stars don’t die in Liverpool in mind, for I don’t mind confessing, I found myself falling a little in love with Gloria Grahame* as well as Peter Turner.

*Or was it Annette Bening. Tricky.