A Venus Flytrap in heels

The Trout was in Market Street next to Newport Market and near a public toilet.
The first time we drank there Adrian introduced me to a large woman in a bright floral frock. She was middle-aged and had greasy black hair tied in a ponytail. We ended up in a very slow waltz across a beer sodden floor. The power of alcohol. Devastating.

She pulled me into her. I still remember a yeasty, sour smell. It was like dancing with bread-dough in a dress. I’d been caught by a Venus Flytrap in heels. If I’d been battered or bread-crumbed she’d have swallowed me whole, and all the time Adrian was grinning like a maniac on the side. Bastard.

I didn’t go back to the Trout immediately and when I did it wasn’t with Adrian Jones. By this time I was writing, and I drank alone. The Trout was conducive to drinking alone. You didn’t make eye contact unless ordering a drink. In between times you could stare at the half dead mina bird. That was safe. It perched in a cage to one end of the bar enshrouded in smoke and didn’t move.

Me and the mina bird were talking one night. I was a few beers down and the thing looked like it needed company. From the corner of my eye I noticed a woman in a white dress drinking in quiet desperation. She drank alone faster than some people breathe. A man came in and walked slowly towards her. He slapped her twice across the face. I watched it all through the large mirror behind the bar. He grabbed her by the hair and dragged her out the pub. No one stared or blinked an eye. It was that kind of pub and I was no John Wayne. But then neither was John Wayne.

Adrian Jones introduced me to several interesting pubs, from Pontypridd to Cardiff. We both liked seedy pubs of character, and though I didn’t write much at that point, I was a fairly obsessive observer. The Custom House near Cardiff Docks ticked several boxes. 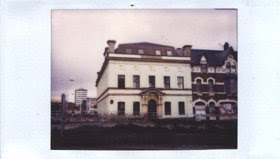 The police have their pubs, hospital staff theirs. Prostitutes had the Custom House. On entering I heard a warning whisper in my left ear. “Don’t make eye contact. It means you’re interested.”

I avoided eye contact but experienced various and intimate modes of contact between the door and the bar. I can’t remember what the beer was like.
Posted by Mike Keyton at 03:54

Thank you for throwing a humourous light on Newport. I'm a Baneswell girl and your historical blogs are funny and interesting. Got any more to come?

Hi'Baneswell Girl' Thanks for the comment. It's generous of you. I'm really glad the posts strike a chord. At present the blog is focusing on America 1982, but I do return to Newport so there may be more to come