Beware 'the dreams of snoring monks' 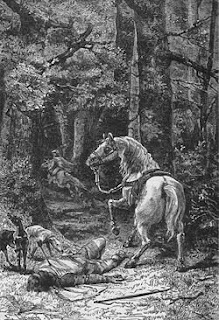 A nineteenth century lithograph. As a child I loved pictures like these, would spend hours staring at what I couldn't see.

Confession and the fair graces of repentance fell into disesteem, holiness and chastity utterly sickened away, sin stalked in the streets with open and undaunted front, and facing the law with haughty eye, daily triumphed, exulting in her abominable success.

No, not Newport on a Saturday night

But let’s not interrupt the man. It gets better:

Wherefore, the heavens did abominate the land, and, fighting against sinners, the sun and the moon stood still in their abode, and spurning the earth with the greatest noise and fury, caused all nations to be amazed at their numerous portents. For there were thunders terrifying the earth, lightnings and thunderbolts most frequent, deluging showers without number, winds of the most astonishing violence, and whirlwinds that shook the towers of churches and levelled them with the ground. On the earth there were fountains flowing with blood, and mighty earthquakes, while the sea, overflowing its shores, wrought infinite calamities to the maritime places. There were murders and dreadful seditions; the Devil himself was seen bodily appearing in many woods…

This could be advertising the ultimate disaster movie and demands to be read in the sombre rumble of a cinema voice-over. Peter of Blois (1070 – 1117?) may have had such a voice but he’s dead, and so is the man he is writing about: William II of England, better known as William Rufus, or the Red King.

It’s a puzzle as to what the Church disliked most about William Rufus, the fact that he may have been gay, his friendship with Jews or the fact that he regarded Church property as pretty much his own. But in 1093 something dramatic happened.

The king fell ill in Gloucester.

And that illness affected the Church, Scottish history, and Newport!

Convinced he was dying, the terrified monarch was desperate to make peace with the Church. He agreed to appoint Anselm as the new Archbishop of Canterbury. The See had been vacant for four years and the king had been enjoying its revenues. Anselm wasn’t fooled. He smelled trouble if the king ever recovered, and had to be dragged to the royal sickbed to receive his staff of office.

Malcolm III of Scotland was more unfortunate. He’d come all the way to Gloucester to seek audience with the king only to be turned away. Unconvinced by the illness and enraged by the insult he attacked Northumbria where he was killed along with his son. His wife died three days later.

Newport however acquired some monks. The king was so grateful to the monks of St Peter’s Abbey, Gloucester that he gave them St. Woolos Church in Newport, along with 15 hides of land (A hide was the amount of land needed to keep a free peasant farmer and his family. It varied between 60 -120 acres)

But then the king got better and boy was he mad. He felt he’d been suckered and expressed contempt for the Almighty who had treated him in this way. No way was he going to carry out promises to a God who could put him through such discomfort.
Of Anselm he said: Yesterday I hated him with great hatred, today I hate him with yet greater hatred and he can be certain that tomorrow and thereafter I shall hate him continually with ever fiercer and more bitter hatred . So he knew where he stood.

But God or the devil had the last laugh. In 1100 a monk in St Peter’s Abbey in Gloucester received a vision in the night that the king was about to suffer for the bloodshed and adulteries of which he was guilty. (not particularly graceful language to a king who had given them 15 hides of land in Newport).

Also at Gloucester, Fulchred, the visiting abbot of Shrewsbury, preached a sermon on the theme that ‘the bow of Divine anger is bent against the wicked, and the arrow swift to wound is taken from the quiver. It will strike suddenly. Let every wise man avoid the blow by mending his ways’

A warning letter was sent from the Abbot of Gloucester, which the king read just prior to the Hunt. Rufus burst out laughing, refusing to believe in what he called ‘the dreams of snoring monks’. He asked those around him whether he looked the kind of man who would take notice of the dreams of ‘little old women’ and embarked on his final hunt.

The Royal forests then enjoyed gold plated conservation laws. Eyes could be torn out and limbs mutilated for the slightest infraction of woodland law. Dogs were crippled by the amputation of three claws of the forefeet so they couldn’t chase deer.

The English, impotent against their Norman conquerors, found comfort in tales of the devil haunting these woods. The New Forest, in particular, was especially fatal. Richard, the Conqueror’s eldest son was gored to death by a stag in the New Forest. The son of Duke Robert, (Rufus’s nephew) lost his life in the same forest - smashed against a tree by an unruly horse. Knowing all this, having had the warning letter from the monks of Gloucester who had already saved him once, and having himself had a prophetic dream only the night before – what possessed the man? Stubbornness, maybe. There are all kind of theories. All we can say is that William was shot by an arrow – by accident or with malice, and that his younger brother left him there, galloping off to be crowned Henry I.

No doubt the monks of St Woolos prayed for both their souls.
Posted by Mike Keyton at 02:53