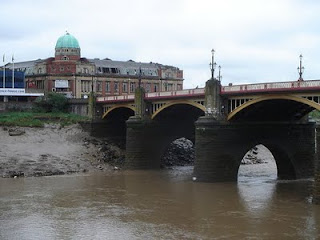 Find the tunnel!
Posted by Mike Keyton at 03:45

Facinating..i have lived in Newport all my life and didn't know about these mysterious tunnels..Great posting.

Hi,thanks for the comment. I hope you found the other Newport related stuff interesting too.
Mike.

Newport is a seedy and magical city, Baz. Tunnels are only the half of it : )

Take a visit to the Newport market cellers. Truly amazing

Thanks for the tip, Andrew. How accessible are they? Who do you ask?

My father always r old me there was a tunnel that went from Newport castle to caerleon,and one from murengers to castle,a smugglers tunnel

The old lloyds now tesco in cambrian rd had tunnels, n the carpenters High streets cellar got them aswell never ventured 2 far in though as they r scary

They must be blocked off???

They are used as storage for the traders. I believe They were used as prison cells at one time and they look that way also, small arched rooms with bars on the front.

They are used as storage for the traders. I believe They were used as prison cells at one time and they look that way also, small arched rooms with bars on the front.

Anon, I can believe one may have led to the Murenger, Caerleon though is a bit of a stretch - in every sense of the word. : ) Thanks for the extra info ref Cambrian road.

Steve, are you referring to the tunnels under the market?

My grandparents lived on Victoria Avenue and they once discovered a tunnel in their back garden.
They didn’t go in to see where it led and filled it in but to this day there is a dip in the garden where the entrance to the tunnel is.

Anon, Damnit to hell. Now you've got me wanting to investigate strange back gardens. An arrestable offence, no doubt. : ) Seriously, thank you for the info. If it wasn't an old air raid shelter and they were having you on, I wonder where it could have possible led to.