I’d met Dave Loney on my Moroccan journey. I’d grown tired of the brazen blue skies, longed for some cloud, anything to make the blue less boring, less powerful; cut it down to size.

Come to Yorkshire, he’d said. In fact we could do the Lyke Wake walk. It sounded good: cool moor-land weather, bags of atmospheric cloud, and a pint at the end. A year or two later I took him up on the offer.

‘You know how long it is,” said as he was tying up his boots.

‘Forty miles from Osmotherly to Ravenscar on the coast.’

So that was why we were setting out at 5 a.m. Forty bloody miles? “Sounds good.’

‘You get to sign a book at the end. You’re officially a ‘Dirger’.

‘And if you walk it back again next day you’re called a ‘Double Dirger’.’

I wondered whether ‘Dirger’ was Yorkshire for ‘Fool’ but said nothing.

I can’t remember how we got there, but the bleak expanse confronting us is etched on my memory. I wince when I think on it. What’s so wrong with brazen blue skies?

The walk began and ended in mist.

Occasionally I’d look up from the uneven ground, the razor sharp grass, at Dave always ten paces ahead. His rhythm was steady, the small rucksack bouncing up and down on his back like a bloody metronome. I couldn’t take my eyes off it, my world reduced now to a dark strip of neck and a small green bag bouncing up and down, up and down. Couldn’t hate Dave. He was my only way out of here. I targeted my hatred on that bloody bag that found the walk easy and had learnt the art of the silent taunt.

I didn’t answer. Saw him shrug 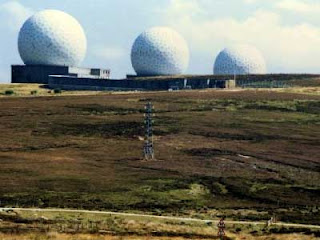 The name of the walk has Viking origins. Lyke is an old word meaning ‘dead body’ – (peculiarly apt I thought as the walk came to a close.) and related to the German word Leiche. ‘Wake’ refers to the watch over the dead prior to burial. Bear in mind that RAF Fylingdales on ‘Snod Hill’ has as its motto ‘Vigilamus’ (We are Watching’) All terribly spooky to the walking dead staggering across the moor.


It was late afternoon when we stopped. The mist had cleared and three great white snooker balls dominating the horizon. Fylingdales – part of our early warning network against nuclear attack. Just then a four minute warning seemed attractive. Just enough time to finish our cheese sandwiches.

We’d tried eating them earlier but had been disturbed. Attracted by the rustle of paper, the aroma of bread and Wenslydale cheese, woolly wraiths emerged menacing from the mist. Cows are reputed to be dangerous when they’re in calf. They have nothing on the Yorkshire sheep in search of a cheese sandwich.

It wasn’t our finest moment, being mugged by sheep. 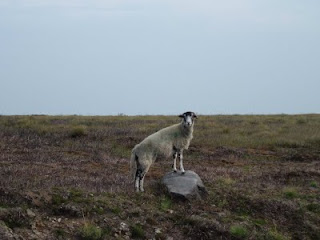