The Jitterbug in San Antonio, and one angry moment 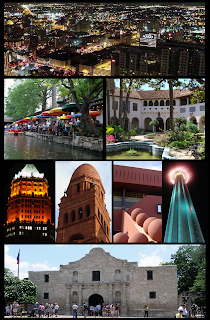 That evening we went to a club alongside the river that runs through the city. Enflamed by drink and unaccountable recklessness, I unleashed my dancing daemon. Well, actually Kim unleashed it. She persuaded me to jitter-bug. It seemed simple enough. She persuaded me it was. Luckily there was plenty of space.

Soon I was jitting and bugging with the best of them: Kim’s hand sometimes attached to mine, my other arm around her waist, occasionally in the air pulling imaginary bows. I pulled her from this side to that, once or twice between my legs. I imagined I had rhythm: hips swaying, knees bending, fingers trembling, tickling the spirits gathered around us. I was in heaven.

It was over too soon – or perhaps not soon enough for those close to us.

Later, back in the camp, another Aventours coach pulled up. At first I thought it was on fire. The door opened and more smoke came out, and I heard military style music, anthemic. You could sing to it; march, but not jitterbug. From the smoke emerged the first of the Israelis.

They proved an unpleasant bunch, intolerant and racist, and just so bloody certain they were right. And yes, they were young and might now be benevolence itself. But I had only the one Israeli in our group to go by, Doritaa. She was young too, but generous and absent minded and easy-going.

I listened to them talk and thought of Einstein, Maimonides, and had I known about him then, the wonderful Howard Jacobson. Okay so all these are high falutin exceptions. I thought of Dr Rosenthal who brought me into the world, who pressed my head into shape and was the touchstone of all that was good in Walton Vale, his partner Dr Young who brought be Beatrix Potter books when I was hospitalised with rheumatic fever.

In fact the only time I ever doubted a Jew could be fun was when I was forced to watch a BBC production of St Paul of Tarsus as a child. A Sunday treat. On a small black and white TV. I watched men haranguing each other in small rooms, men with long beards, furrowed brows and long stripy robes; earnest coves the lot of them. But then my mum explained they were the Christians.

These Israelis didn’t wear long stripy robes but they knew how to harangue. They harangued me. One of them had made a series of racist remarks about Arabs and I went to walk away. They must have seen my face. Two of them followed me. Like Mormons but fiercer.

And then something in me snapped. I don’t like to be badgered and bossed or harangued. I told them that they should know better than to force people into ghettoes. They argued back, one of them referred to Arabs as animals, and I became angrier still. Blame it on the Boogie…the whisky… the jitterbug. People gathered round and we were eased gently apart.

Muttering continued over the campfire, but I was in my tent. Early next day their coach pulled away, blue smoke spilling from its windows.

Me and Kim in recovery mode. 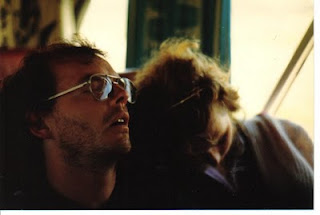 Whoa! I like this side of you, Mike. I think you turned me on. LOL.

Thanks, Maria: Jitterbugging, or losing my temper? I'm quite tedious now. Equable :)

I'm probably going to regret saying this but....

A friend of mine, an Australian Army officer, told me once about a tour he did in the Middle East. For r&r, a bunch of them went to an Israeli beach. And they were approached by many Israelis, thanking them for keeping "the animals" at bay. One older woman in particular, Eddie (not his real name) told me, came up and told him very smugly that "everyone in the world loves Israel" and that his presence was solid evidence of that love, as opposed to the hate that all civilised peoples must hold towards the Arabs.

Eddie was never that interested in politics. He was an Anglo soldier doing his job, he thought. But the attitudes and statements from the people he met on the beach upset him and made him rethink the situation in that region. He said that, given the choice, he never went back to Israel for r&r again.

In my limited experience the Devil and/or human nature is a yeast that feeds on anything: Arabs, Israelis, Irish, Brits, exploiter and exploited. Some situations offer more nutrition to the yeast. What I experienced, like your friend Eddie, is a symptom of that.

I think I understand your caveat - 'I think I'm going to regret saying this, but... because people have a natural tendency to avoid an open wound, or kicking a hornet's nests. But the alternative is walking by with closed eyes and mouth. The issue, really, is that no one's cornered the market in evil or goodness. Both are found everywhere.

Winces, I'm getting heavy. Thanks for the comment, Kaz