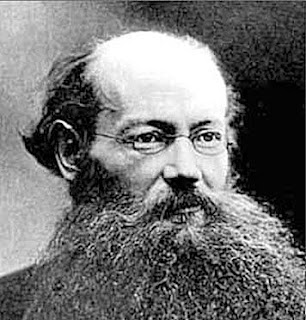 In many respects the Russian aristocrat and anarchist Kropotkin had a remarkable life, dying in squalor in the early years of the Russian Revolution. There is much to admire in him, but one thing sticks in my craw. In his words and actions he betrays a sense of ineffable superiority to the deprived or less gifted. The very thought would no doubt appal him. He spent most of his life ‘fighting’ for the poor, the operative word being ‘for’. This word unites both Bolshevik and Fabian, and in this case Kropotkin. The anecdote below illustrates the point to perfection.

'…the teacher of writing, Ebert, who was a German Jew, was a real martyr. To be insolent with him was a sort of chic…His poverty alone must have been the reason why he kept (teaching us) But…he had made an agreement: ‘One frolic during each lesson, but no more’ – an agreement which, I am afraid was not always honestly kept on our side.

One day (a student) soaked the blackboard sponge with ink and chalk and flung it at (him) ‘Get it, Ebert!’ he shouted, with a stupid smile. The sponge touched Ebert’s shoulder, the grimy ink spurted into his face and touched down on his white shirt. He took out his cotton handkerchief and wiped his face, ‘Gentlemen, one frolic, no more today! The shirt is spoiled,’ he added in a subdued voice, and continued to correct someone’s book.

We looked stupefied and ashamed. The feelings of the whole class turned in his favour. ‘He is a poor man, and you have spoiled his shirt! Shame!’ Somebody cried. The culprit went at once to make excuses. ‘One must learn, sir,’ was all that Ebert said in reply, with sadness in his voice.

All became silent after that, and at the next lesson, most of us wrote in our best handwriting, and took our books to Ebert, asking him to correct them. He was radiant, he felt happy that day.

This fact deeply impressed me, and was never wiped out from my memory. To this day I feel grateful to that remarkable man for his lesson.'

It’s a horrible story. As an ex teacher I feel it more so. The worst that ever happened to me was that some little bastard surreptitiously drew a blue biro mark on the back of my fawn linen coat as I was marking some work. I still resent it. I’d like to strangle him, or at least kick his head in. ‘One frolic’ be damned.

But look at the language Kropotkin uses. The teacher here is to be pitied. He needs to be championed. Indeed poor Ebert is so socially cowed that he is ‘radiant’ and feels happy all day because the boys feel sorry for him and hand in good work. I’d like to hear Ebert’s side of things as to how ‘radiant’ he felt. In fact the whole miserable story is told to illustrate Kropotkin’s sensitivity for the feelings of others. Ebert’s misery is a hook upon which to hang Kropotkin’s finer feelings. He feels grateful for a lesson taught, so that’s all right then. Bugger Kropotkin
Posted by Mike Keyton at 04:20

I have my doubts Kropotin would've had a similar experience in today's school system.

Besides, I can't help feeling there was a passive-aggressive curve to his 'lesson'. Pity used as a weapon to keep students in line rubs me the wrong way.

I much prefer the 'contract' relationship. I teach. You learn. And nobody gets hurt. That's the Chicago way. :)

Interesting. I don't think Ebert was 'using' pity. He was a Jew in a deeply anti semitic culture, and he was of a lower class to the young aristocrats he was teaching.

And thinking on it, with a mortgage and family to look after, the 'negative consequences' to use jargon, had I actually discovered the culprit might have given me second thoughts. Trouble with many schools is that it is no longer a case of 'one frolic' : )

Interesting! However, I never heard of this gentleman. Were you a history teacher? I'm an adult language teacher. I rather deal with adults ;)

Claudia, Kropotkin was a Russian prince who became an anarchist theorist, a man of ideals and principle. He's worth googling, worth reading his memoirs. Pure gold history.

Yes, I taught history and stopped teaching when I stopped enjoying it. Life's too short

I too would have wanted to kick his head in. At the very least...

Chicago, with a Liverpool twist it is then : )