Humphrey Bogart and the Fruit fly

It’s nice to know we’re so closely related to the fruit fly – men at least. Why is that? Why do all these experiments focus on the hapless male, in this case the drunken hapless male? I’m talking about alcohol and tricks played on male fruit flies.

The bad news is the male fruit flies grossly outnumbered the female fruit flies – (Can’t you just hear those scientists snickering?) – and thus revealed the abject folly of prohibition. The rejected males sought solace in drink, alcohol being the next best thing to sex.

Fruit flies self medicate as do mice, rats and monkeys that are subject to isolation, bullying or aggression.

It suggests that aspects of the brain’s reward system have changed little since we crawled from the primordial ooze, in particular those brain chemicals linked to addiction.

It seems to me the obvious way to solve this problem is to ensure that everyone has a regulated amount of sex on a daily basis, which would ensure that no one was isolated and everyone would be too blissfully content to bully or fight.

Dr. Markus Heilig, the clinical director of the National Institute on Alcohol Abuse and Alcoholism and the National Institute on Drug Abuse, sees thing differently. Though not involved in the research he argues that the findings supported new ways of treating alcohol dependence. He is urging researchers to investigate ‘several compounds aimed at blunting alcohol urges.’ In other words don’t solve the problem, mask it with drugs.

And what a tragedy that would be – losing the dark lyricism of an alcohol culture. One day, far in the future, the humble fruit fly might have its own Casablanca: 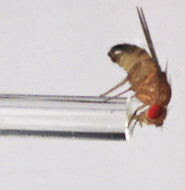 Play it once, Sam. For old times' sake.

Here's looking at you, kid.

What is your nationality? I'm a drunkard.


Meanwhile we shall be taking prozac.
Posted by Mike Keyton at 04:04

Okay, the snickering you hear in the background, that would be me. This was just a combination of too silly and sad all wrapped up in one post of Bogart-palooza in the end.

Not sure if I should think, "Poor fruit fly" or "Poor males".

Not sure if I should think, "Poor fruit fly" or "Poor males". Okay, but in terms of complete scientific objectivity, I'd like to see the same experiment conducted with just a few male fruit flies and a hundred frustrated female fruit flies buzzing round - and see how much alcohol the ugly ones consume in recompense : )

Great last line, "What is your nationality? I'm a drunkard."

I'm glad you liked that last line, Stephen. It's my favourite too. I'll certainly check out your advice ref word verification. Truth is I have no real idea as to how valuable it is in stopping spammers.

I know this was meant as humorous, but having had an alcoholic father, I would've given anything if they could've found a cure for his addiction. Pancreatic cancer killed him, but his diseased liver came in a close second. He was a dead man either way.

So as not to end with such a gloomy comment, I will also say that he was very brave and funny to the end. Even now, his stories make me smile. I wish I had half his talent.

Thanks for your honesty, Maria. And I'm sorry. But I think your last comment is relevant too. We are complex beings of spirit and flesh. We are what we are

Very interesting post, Mike. While reading it, I was thinking that fruit flies are destined to be "alcoholics" due to rejection (it's nature not nurture). Humans, on the other hand, have free will and reasoning to make choices. Am I being too hard on humans? Although the experiment makes complete sense, we're nothing alike these insects.

Hi Claudia, we pride ourselves on having free will. But then you can wonder how much free will does, say a dolphin have, or a chimpanzee, elephant or whale; and whether there are graduations of free will extending down to insects and the humble amoeba. In a similar fashion how much evolutionary baggage do we still carry from the appendix to the amygdala - the latter often referred to as our reptilian brain. You're right in that we can exercise 'free will' but doing so often cuts across the grain of neural patterns that we inherit - and in this case might share with lesser creatures. Phew. Thinking makes me thirsty - at least the fruit fly wouldn't say that : )

Love the last line. I shall be chuckling about that all day. :)

Thanks, Shirley. I was getting quite attached to these little fellows, kindred spirits and barflies