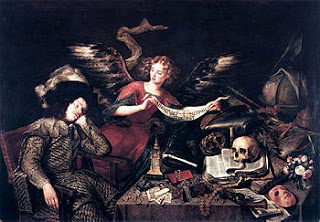 Dreams slide glide from the conscious mind, evaporate in reality, whatever that is. Shreds remain, fish-scales that vanish in time. You may catch the dream for a moment – hold and inspect it  What was coherent and real now looks plain weird. Fragments that won't reassemble - nothing holds - which is probably as well.
There is a very thin membrane separating my dream-life from everyday reality. I feed on them, but I wouldn’t like it the other way round. A good friend of mine, an old man - once a very famous writer, is now losing it. He is still, though, a gentle and beautiful spirit.
When I visit him he tells me of armies of people walking down the stairs, clumping in the bedrooms above. He spends much of the day alone, often in the chair from which he nods in and out of sleep. His ‘real’ world has become so thin the membrane has broken and dreams intrude. They make sense to him. Sometimes they make sense to me, too. I listen to his memories which are not so far removed from dreams.
I imagine the brain stores memories and dreams in much the same way. Most people cannot remember their dreams except for an occasional fragment. Some people cannot remember ‘reality’. It would be nice to have the choice, nicer still not to grow so old you lose everything in dream.
Posted by Mike Keyton at 07:20

Sad and poignant. It's hard when the people you care about lose their tether.

I hope you'll throw me a rope when you see me start to slide. :)

I think it must be terrible to be trapped in one's mind like that. Especially when I think of the dreams that I have more often than not.

Especially when I think of the dreams that I have Now you've intrigued me : )

The story of the old man is a beautiful one.
I think there is a very close connection between our dreams and waking life; I got convinced of that studying psychology.
Know what? I think dreams do make sense; we just don't grasp it very easily because, well, do we really ever try to?

What a sad post. It's so difficult to see loved ones sink into a different world. Ah, if only we had the choice not to grow so old that we lose everything.

I put a guest post together for a friend today…liked it so much I want to take in on a tour…meaning I’m begging for invites.

Would you be willing to host me on your blog?

I put a galley of twenty favorite pictures together for my friend’s post…If you are up to me taking several meg of your free Google disk space.

Jay, they make some kind of sense if you can catch them...and for a very short time

Mac - that's fine - after JC's post. Link would be appreciated.

My dreams are generally the kind that wake me up in a cold sweat on the verge of a panic attack, sometimes my awake moments cause the same reaction so am not sure either one is good for me Mike.

You have a recipe for zucchini squash, we did not plant any because my husband/Mom and myself prefer the taste if yellow summer squash. However I am open to suggestion and trying something new if the recipe ingredients are common enough that can find them here in Texas, since you are totally in another world grocery shopping wise (as well as location).

Any other recipes you might want to share are welcome also, all my cookbooks went in the 2011 fire too. :-(

I watched this happen to my father, it was fast and aggressive but still felt long and never-ending, with the disintegration of his reality subsiding away to nothing over three years. He had been living alone in Newport and so in 2006 I helped him make a move away from there to Watford, to be around the corner from me when he needed accommodation which provided some support and a watchful eye. We enjoyed being closer for a couple of years (I have no siblings) before a routine scan showed the very early stages of Dementia. I chose not to tell my Dad. Rightly or wrongly, I’ll never know.
Because I knew him so well a part of me experienced some of that disappearance with him. It is the way you describe Michael, with a continual, pendulous shifting back and forth over and over, between reality and somewhere else. In the beginning, when he was initially diagnosed most folk could barely tell that it was there. In the beginning I found it hard to believe myself, I even fantasised that perhaps the doctor had been wrong or perhaps it wouldn’t develop any further and he’ll suffer nothing more than the odd ‘senior moment’! But sure enough about a year later I started to notice the occasional glimpse of that membrane thinning in some areas. For instance he would recount a memory, many of which took him back to being a young man in Ireland and whilst talking, he would slip into it and the more wrapped up he became in the memory he would begin to use the present tense as though he was there and it was a current, ongoing event. Then he would suddenly realise, scold himself jokingly and then place it firmly and correctly back into the past again. Again this fed into my denial and I would say to myself things like ‘you see, he corrected himself, he’ll never let that happen to him’ or ‘he’s too strong-minded/self-aware/on the ball’.
As time went by the ratio of his time spent in the 'now' became less and less, and the visits to the alternate reality became more frequent, longer-lasting and more real to him. He frequently told me that he had seen a ghost, a lady, who would walk past the door of the lounge where he sat and stare at him angrily as if she felt he didn’t have the right to be there.
Sometimes he was happy to drift into that world where he would remember my face but not my name. Other times it was like he didn’t want to go but ‘it’ would drag him kicking and screaming nevertheless, this showing itself in my father as such distress and confusion that I found it gut-wrenching to watch. A battle went on inside of me whilst sitting each day and holding the hands of a man who was once so formidable, stern, knowledgeable, fiery, humorous, protective, opinionated and articulate (of course the list goes on forever of attributes that he lost) and having to speak to Dad on a child’s level. All of the time your own inner child is yelling inside your head demanding that he come back and shout 'April Fool!' The battle is not to think aloud and start to beg the disappearing person not to leave you. The amount of times I nearly dropped to my knees in front of him and did just that where many.
The relief for him began to come about when the shifting between both worlds began to happen less often. That however became the hardest time for me because he’d shifted to the other side and try as I did to share that with him and be there with him, I always had to come back to reality and leave him where he was.
He died in July 2010 whilst I hugged him and whispered in his ear that it was okay to let go completely. Thanks for your post Michael, it really resonated with me and it comes very close to the anniversary too which made it all the more relevant for me. Thanks for using your space to make people aware of it, and for writing it so eloquently. And let’s hope that we all have a hand to hold should we ever find ourselves in that place. I hope you’ll forgive me for occupying so much of your space; I started writing and kind of got carried away, it just seemed sort of appropriate.

Mary, thank you for such a thoughtful and beautiful response. You have a wonderful 'voice'and for that moment brought your father to life. My personal belief is that he is still with you, as he was, and your mum too.

Michael, thank you. I'm flattered by your comments as they’re coming from one who’s literally way more literary than me (ha). It wasn’t my intention but I actually found it quite cathartic I have to admit, in a positive way, having never put my feelings relating to that experience down on paper/pc before. I was slightly concerned that I’d had a bit of a morose rant(!), but upon reading it back I guess it is quite nice - glad you liked it anyway.

It's the key to good writing, Mary. It comes directly from the heart. All the rest is flim flam and pretence. Go get a drink. I'm having one now, a pint of red wine