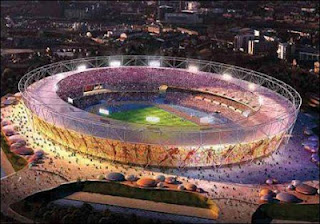 Well we can at least hope we don’t repeat the mistake of the Seoul Olympics when hundreds of doves were released, many of whom landed on the rim of the Olympic cauldron and were promptly incinerated.
Posted by Mike Keyton at 05:24

We never miss the Opening Ceremony. We'll be looking for your daughter.

While some ceremonies aren't as good as others, each host country does its best and that's all I can hope for. With any luck it'll bring lots of tourist money to the UK.

I wish I had seen the opening ceremony in London live, being there myself, rather than being here.
Your review helped being more part of it.
Thanks!

Hi Maria, I think Danny Boyle got the balance right. I hope you enjoyed it.
Jay, I'm glad my take on it had some use. I think the general view now is that Danny Boyle did a very good job. At least real 'doves' weren't hurt in the process : )

I watched portions of the opening ceremonies and what I saw looked fine to me. I'd give Boyle a pat on the back. There's always going to criticism; look at the'96 games in Atlanta, which were heavily criticized for being too commercialized. Atlanta's opening ceremony with its 500 cheerleaders and 30 pickup trucks was seen as garish. I guess the IOC and the restof the world wasn't into Redneck.

Sheep!?!? I just hope those poor creatures didn't go out the stadium's doors and diverted directly to the slaughter house. It would be a real shame. I didn't see the openeing ceremony because I was the Just for Laughs comedy festival attending two shows (one being the gala). I stopped watching the olympic games a long time ago. Sportsmanship has a different meaning now, politics somehow has made its way through, and political incorrectness is all over. I don't enjoy it anymore :(

Oops! sorry for the typos. I'm still half asleep: *delete 's, *opening, *I was at

Hi Mike .. wonderful that you got to see the rehearsal - I thought it'll be a ceremony no-one will forget and it was so British ...

I do hope your daughter has fun - congratulations to her on her achievement and actually being a part of the Olympics ..

Hi Mike, you're right. It's a bit like trying to square the circle and if you achieve a measure of success you add the stress to the next 'luckless' or otherwise organiser. I've seen it three times now - first live at the dress rehearsal, second on TV on the night itself and third with my daughter who, because she was part of it ironically saw relatively little herself. Some images stick in the mind.

You're dead right, Claudia. It's not for everyone. Mind you, I was a bit puzzled by your reference to being politically incorrect.

Hi Hilary and thank you for your good wishes ref my daugher. She did really enjoy it!

I thought it was wonderful. I came over all British and enjoyed every second (except McCartney). It's impossible to please all the people all the time, but I think Danny Boyle got the balance exactly right.

Oh, Mike. Let me clarify. I didn't mean the Olympic Games are politically incorrect, I meant the whining from spectators and judges. Nowadays, you can't do or say anything without hurting someone's feelings. You always have to tip-toe around in order to avoid a "faux-pas" That's what I meant ;)

Shirley, you're right. It's a bit like writing. You have to please yourself and hope enough people share your vision.

Claudia I understand. My twist on it is that people are toooo politically correct - which kind of means condescension. As pure theatre this opening ceremony was pretty damn good