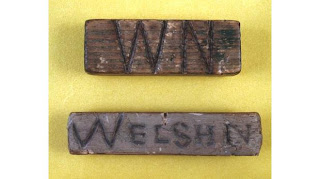 In the C19th Welsh children were discouraged from using their own language in schools by the use of the ‘Welsh Not’. If a child was overheard speaking Welsh in the classroom he or she was given a token that would result in a beating at the end of the day. The luckless child had every incentive to finger another Welsh-speaker for it was the last one holding the ‘not’ who suffered the punishment. Brutal and crass, but no doubt efficient. And a wonderful piece of anti English propaganda that still resonates today, and makes 'interesting' lessons for lazy teachers

In fact the ‘not’ was not widely used, nor a statutory imposition. In 1847 a  Royal Commission investigating the state of Education in Wales said many uncomplimentary things about Welsh education, including a belief that the Welsh language was a regressive factor in holding children back. But, at the same time Inspectors stated very clearly that the Welsh ‘Not’ was ‘arbitrary and cruel’. More significantly the report showed that education was conducted in Welsh in the vast majority of schools. To state it again, the ‘Not’ was never government policy. Where you might find it was in some denominational schools, Anglican as well as Non Conformist,  but attendance at these schools was voluntary so it is likely that parents who sent their children there in a Welsh speaking area largely approved if only to the extent they wanted their child to speak English.

But why spoil a good myth? Nationalism needs its martyrs and children make good copy.

In the C21th  these culture wars still resonate. It was reported in several papers that Aberaeron Primary school, amongst others in Ceredigion, reveal a similar albeit reverse intolerance. Children are given a ‘red warning’ if they are caught speaking English once, an amber a second time, and green for a third – resulting in a visit to the Head. One child was refused permission to go to the toilet because he hadn’t asked permission in Welsh.

These claims are both championed and denied in the febrile world of the Twitterati but the significant point is less the truth of such claims and more the fact that such claims are made.

The claims may be true. They may not be. I have no way of being sure. You might believe in the adage there’s ‘no smoke without fire’ – unless the smoke proves to be –like the ‘Not’ – little more than Welsh mist and myth.

True or not there are of course the psychological repercussions. A Welsh child may once have associated his language with a sound thrashing. His English equivalent in C21st West Wales may associate his language with bladder ache and wet pants
Posted by Mike Keyton at 09:30

Do you speak Welsh, Mike?

I apologize in advance for my pathetic ignorance. I hadn't realized there was a difference :-(

You didn't realise there was a difference between English and Welsh? Watch it, Angela - the Welsh Taliban will be on to you : )

Couldnt have put it in a better way mike. Unfortunately a lot of other websites got it wrong and the nationalists are guarding them with sheilds and swords. But the facts lie within the blue books. Only time... and everyone will see the real reasoning as you have.

Thanks, Warriorgal, much appreciated. Mind, I'm intrigued as to how you stumbled across an eight year old blog post. :)

The ignorance in this post makes me laugh. I had conversations with my now well-deceased grandmother in the 70's. She told me how the Welsh not wat used will into the 20th Century by English headmasters and teachers This is simply another attempt to change history.


Hi Listerdue, and thanks for dropping by. I think the key line is 'In fact the ‘not’ was not widely used, nor a statutory imposition.' It doesn't contradict your grandmother's individual experience but perhaps her generalisation.