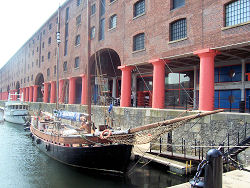 Recently went to the Tate Modern in Liverpool. Saw two parrots in a cage…which was interesting. It saved me a visit to the Zoo but Rembrandt it wasn’t. A little farther on was something even more interesting: a collection of model dogs on rollers scattered with artistic integrity on a large shallow plinth. On their backs were various metallic objects, mostly bottle caps and behind them was a map of Mexico City, an ink-marker showing where these various dogs had roamed – or rather the ‘artist’. The artist had taken each model dog out for a walk, their magnetic rollers and legs attracting any stray metal on the ground. These had been subtly transmuted into art and now dogs and bottle-tops held their place in the Tate.

I was pondering over this in my favourite pub, The Philharmonic, more commonly known as the Phil. Did the fact that I was thinking of it and now passing on my response validate these dogs as art? I sipped my pint, for a second convinced. But then again, had I been mugged I’d have had an even stronger response and would be passing on my response to the nearest policeman - and hope he wasn’t a fan of conceptual art. ‘But how was the experience?’ he might say.

I took a sizeable swallow, and then another, contemplated the glass for a moment or two. Beer wouldn’t count – far too ephemeral even for the Tate…though perhaps if I nursed it through Liverpool 8…

Just then an American tourist came in to view. He squatted and took a considered photo of the Phil’s mosaic floor. This is not unusual. The Phil is a masterpiece (too big for the Tate) of late Victorian excess, from its ornately carved panelling, intricate plasterwork, chandeliers, brass and stained glass to the fine mosaic floors the tourist was currently recording. 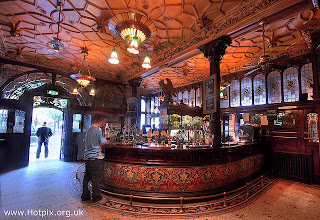 *
At last, satisfied with what he had, the tourist turned to the snug, just off from the main bar, where I was drinking my pint, and I realised I was going to be part of his picture. I averted my head slightly and stared into my drink with what I hoped was a mysterious expression. He’d have a fine picture of art nouveau panelling, and me with my best enigmatic gaze. If I knew who he was I’d suggest him contacting the Tate. The photo has everything: the ephemeral nature of beer against a background to die for, and a response both pro-active and retrospective from its subject, contemplating whether he had time for another one. The only thing lacking, I suppose, were the magnetic legs and a bottle-top on my head.

I imagine you in a rendition of Edward Hopper's Nighthawk--only with more glitz.

Hmm, you mean the guy by himself or the guy with the dame?

You didn't mention that your wife was with you, so for your sake, you'd better be solo.

Must have a pint there one day.

Crash, you should. It ranks with the pyramids, but probably safer

Hahaha yeah I don't know if using a magnetized dog counts as art, but hey, who am I to say.

Love the inside of the Phil. I'd like to go there one day.

Misha, the men's toilets in the Phil are such a work of art women are given quick guided tours 😏