Elvis Presley: Lost in a dream

I was listening to the car radio when Elvis Presley came on singing a fairly nondescript song – GI Blues.
It came as a shock – as it always does – how good a voice he had. That night I delved into my DVD collection. It’s a perennial complaint in my family that every year I ask for a DVD, which they claim I put on a shelf and promptly forget. This is a canard. It’s a case of waiting for just the right moment – and one had come now.

I played Elvis’ 1968 comeback concert and was bowled over by two competing emotions. The first, and let’s get this out of the way, was how phenomenally beautiful he was. After such a long time, seeing him come alive on a large screen TV was like seeing a demigod, and at the same time an animated Tussaud’s mannequin. It was a Rorschach thing.

In palmistry the lines on the left hand show your inborn potential. The lines on the right palm show what you have/are doing with it. They tend to coincide but not always and never exactly. It was a bit like that with Elvis’ face.
Disc One showed him performing with his band surrounded by a very strange audience. It was so prim and proper, well behaved children with their parents sitting behind, most of them corporative insiders, I’m sure. There are two kinds of audiences, the kind Hitler, the Beatles and the Stones enjoyed where the performer feeds from the energy of the crowd, and this kind of audience – respectful and all of them feeding from him. Elvis was singing to the un-dead all coiffured and well-dressed.

Back to the face. In every disc the camera panned lovingly over Presley’s hair and face but in that first disc the camera occasionally zooms into his right profile, which is – the only word for it is – weird. His eyes, nose, lips and chin look as if they’re sinking into enveloping cheek. 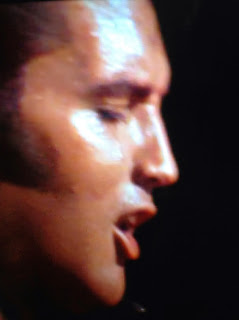 It’s a spine-tingling portent. You sigh with relief when the camera returns to the full face or left profile where an equally unnatural beauty prevails.

This first Disc also reveals a degree of self consciousness and unease, to be expected from an icon threatened by change and perhaps the need to prove himself. It’s a strange mix of self deprecating arrogance. He comes to life when he’s on his feet, singing without the comfort blanket of buddies surrounding him. And, interestingly the camera largely avoids close ups of his right profile. We see only the demigod running through his greatest hits. Most of them are the necessary nods to his hey-day – just to remind you of why he was once unchallenged as ‘King’. Each song is professionally delivered, occasionally electric, but his last song – If I CanDream has pathos and power.

The Aztecs had a god, Tezcatlipoca, and each year his priests chose the most beautiful man in the empire to represent him. For a year this man had everything a god incarnate could desire. At the end of that year he was sacrificed. Presley had more than a year but the story is much the same.

In 1968 he was 32 and, incredibly, a mere 9 years later he was dead, a bloated man aware of the unfulfilled parody he had become. And yes, I like the Vegas shows, but it is a different Elvis, still the consummate showman but more Liberace than Rock God, a sacrifice waiting to happen.

These lines, for me, sum up the tragedy of Elvis. He knew there was more.
There must be lights burning brighter somewhere
Got to be birds flying higher in a sky more blue

My mother is a huge Presley fan and we've showered her with Presley memorabilia over the years.

Have you ever heard him sing gospel songs without his band? He was an amazing talent, the kind we rarely see twice in one lifetime.

Maria, yes, I have heard him sing gospel and when you see him he appears truly fulfilled. I think he was a great talent sacrificed by circumstances

I wonder what direction his career and life would have taken had he been free to go his own way and not forced onto the path his fame and the money to be made demanded.

We stand on giants' shoulders as they say. A lot has been learnt by later artists from the mistakes of the pioneers and those who still fail to see what's important have less to complain about