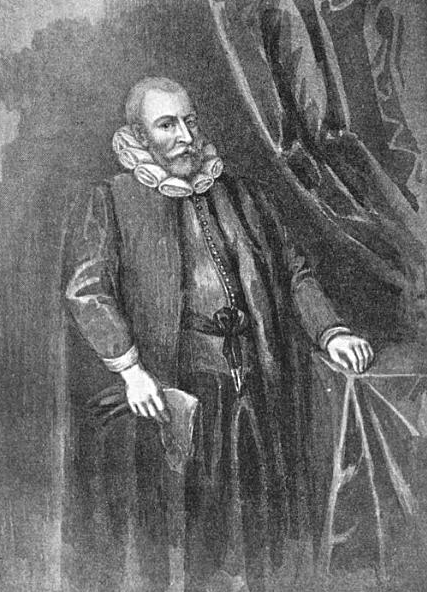 I doubt William Jones ever realized what the started when on the 26th December 1614 he made his final will and testament. In it he left:

“…nyne thousand pounds to the Company of Haberdashers of London to ordain a Preacher, a Free School and Alms houses for twenty poor and distressed people, as blind and lame as it shall seem best to them, of the Town of Monmouth, where it shall be bestowed.”

Though nothing now remains of the original school house, its replacement continues to be part of and administered by the Worshipful Company of Haberdashers of London.

William Jones began his career as an apprentice in Monmouth but moved to London when he was twenty. According to one source it was to avoid paying a fine for some misdeed or other. In London he became a porter, then a factor in the cloth industry. He set up business in Hamburg, trading in ‘Welsh Cottons’ and ended up as a very wealthy member of the  Worshipful Company of Haberdashers.

Jones was a philanthropist, approaching death and no doubt with an eye on his personal salvation. Whatever the case he determined to give something back to the town he had left as a youth. He was also a committed protestant who placed great emphasis on ‘the preacher’ that came with his new free school. The Welsh borderlands were still strongly Catholic, a creed he found pernicious. Jones wanted Monmouth to be a beacon of Protestantism.  In that he failed. In Monmouthshire Catholicism went underground but remained relatively strong. A small town like Monmouth must have known about the regular but 'secret' masses being conducted in the Robin Hood pub. And the execution of the eighty year old Father John Kemble in 1679 was greeted with more shame than acclaim. 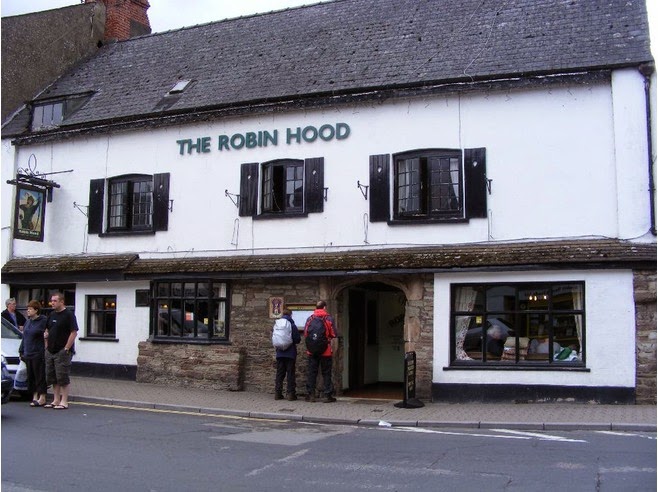 In the mean time Monmouth school prospered, its children behaving in much the same way as today 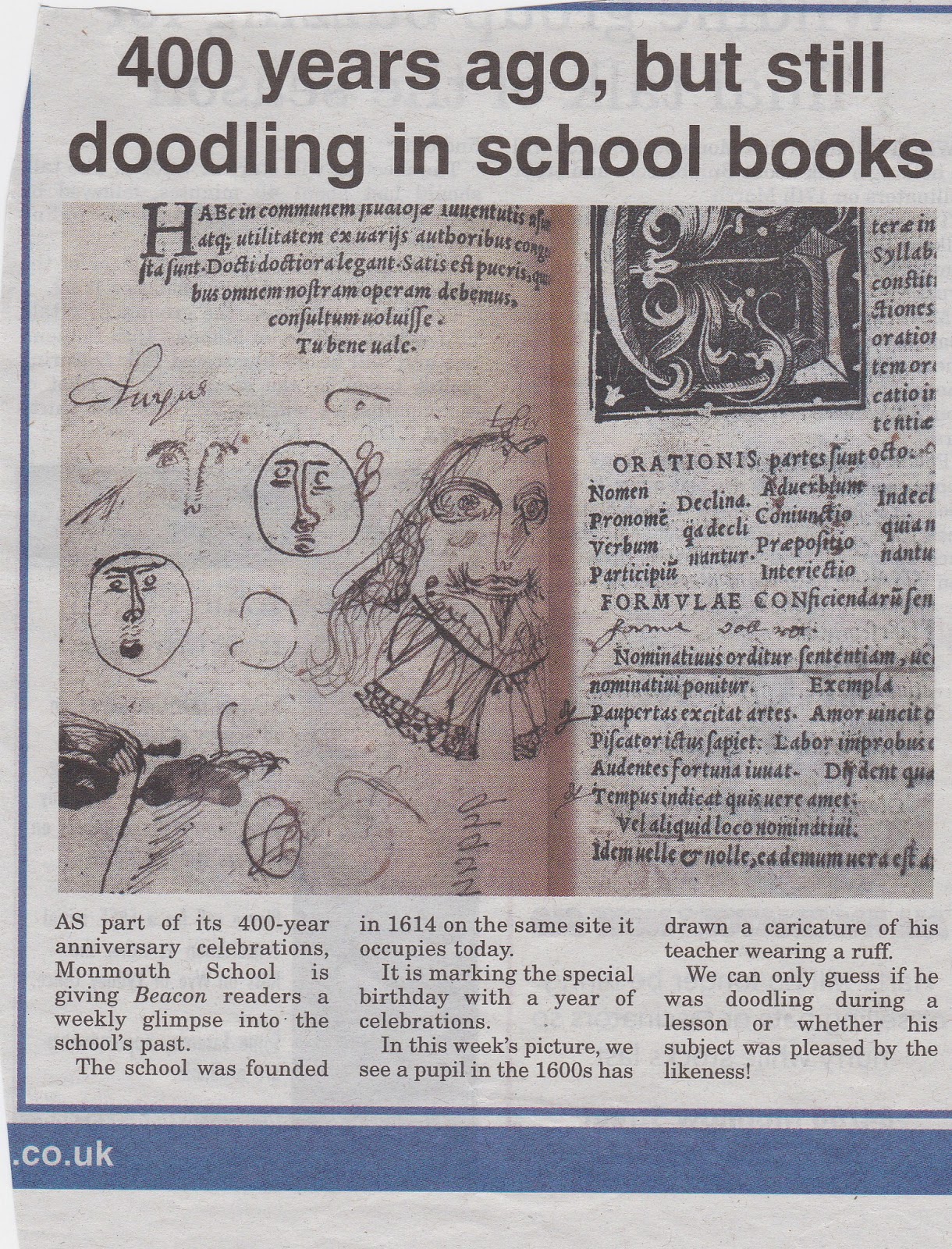 As for being a beacon of Protestantism, William Jones might well have mixed feelings about  Catholic Protestant cooperation in present day Monmouth. He would though be proud - perhaps disbelieving - of  what has been achieved from his gift of £9000. As to whether he envisaged fees of just under £14000 p.a. in 2014, well that is a different story. 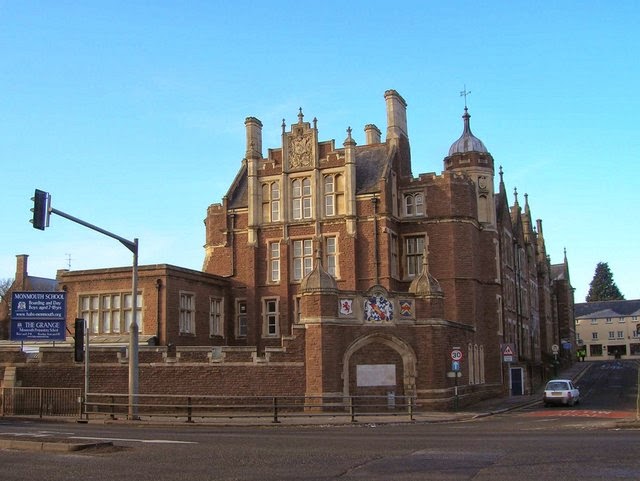 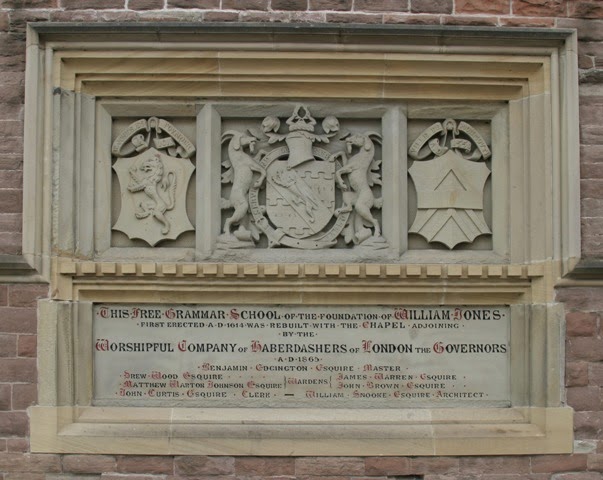 The original school building was replace in the mid C19th. The plaque above commemorates William Jones. Below is an early post card view of the school 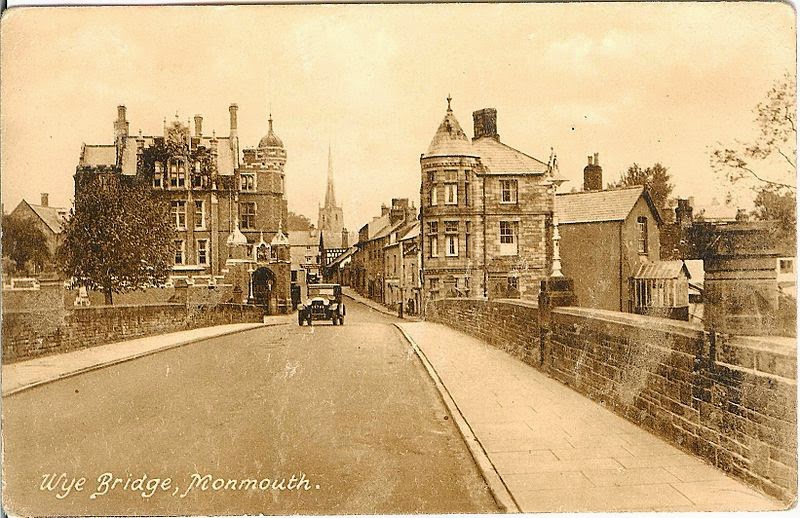 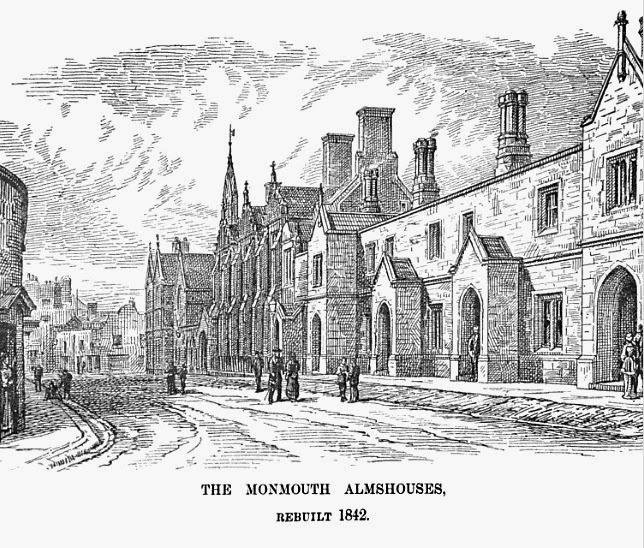 This is just way too cool. I especially liked the 17th century doodles. Things never change.

Why was an 80 year old priest executed?

I love the doodle, too, Maria. It was the the doodle that suggested the post. Ref the priest, it all concerns an anti catholic scare fabricated by Titus Oates and exploited by Protestant politicians to keep Charles II in line. You can check it out on the wiki link I put on John Kemble's name. He was by all accounts a beautiful man. We have a relic - his hand, I think, in our local church.

What a great post. That doodle of the teacher wearing the ruff is brilliant. Love it!

Thanks, Shirley. That ruff wearing teacher made me quite jealous :)

The doodles are too funny! Good to know our generations aren't the only ones having cheap fun during classes!

Jay, I reckon there's a book there somewhere - doodles through the ages kind of thing. I wonder what will be lost when classrooms become fully electronic and students work from iPads :)