The word earworm is deservedly popular and refers to those tunes you just cannot get out of your head. One piece of advice is to hum God Save the Queen as a sure-fire antidote – like drinking from the opposite rim of a glass of cold water is a reputed fail-safe cure for hiccups. I’ve tried neither.

There’s another word for the kind of tune that buzzes between the ears with no source of escape: Maggot. A seventeenth century word, perhaps older. It’s probably more accurate, too, because ‘worm’s are slow and tardy creatures. You’d probably have forgotten the tune before a worm had circuited your head. A maggot however turns into a fly that will buzz in your head until it drops from exhaustion.

There are also visual maggots – one I cannot for the moment drive from my head. It’s KimKardashian’s bottom. And I don’t think singing God Save the Queen is going to have much effect.
It’s everywhere, the meme of the moment, and peculiarly non-sexual. By that, I mean if Andy Wharhol had photographed and signed it – the image would probably fetch millions as art. And that’s how I see it – a product like Warhol’s soup tins, or four pictures of Marilyn. Soulless,(well that’s true of most bottoms,) a smart piece of design, and one firmly ensconsed in my head.

Maybe, instead of singing God save the Queen I should try and intellectualise it – a sure kiss of death for almost everything.

Maybe, in times of hardship and austerity, we are driven to the reassuringly large bottom – a kind of visual comfort food. That works for men perhaps, not too sure where it leaves women. Most men with fat bottoms are commonly called ‘lard-arse’.

Carry on intellectualising. Is it a sin to objectify women or is it a recognition that women from prehistory have held men in thrall and awe? We objectify deities in stone and wood, limiting them in terms we can understand but nevertheless reflecting a need - here for example - the Kim Kardashian of its day. 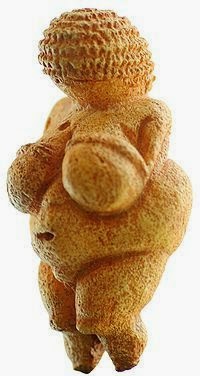 I remember when I was very much younger I had the same problem with Minoan women, where a different part of the anatomy was involved. That was easier to get over. You had to actively seek out Minoan art whereas Kim Kardashian is omnipresent, the Earth-mother of our day. Perhaps in time it will fade. I will give you progress reports. In the meantime I’ll pick out  Jack’s Maggot – a greedy and ruthless aural virus. It may mitigate the worst effects of Kardashian. And at least the dancers are dressed.

I'm late to comment on this, but there's nothing better to unshackle your mind from one preposterous behind than another behind. Enjoy this entirely gratuitous display of buttocks to absolutely baffling lyrics. Afterwards, you're going to like this and this review. You're welcome. ;)

Ah, the divine Nicki! Thanks for the links, Vero. I'm sure, some day in the future anthropolagists - probably AI - are going to have great fun with this.