I wondered what to write about this week,  or whether I should bother. A new computer, transferring of files, learning to find my way round a spanking new 'Office' as opposed to the familiar but outdated 2003, posed problems, but on the basis of learning by doing, I ploughed on, exploring this and that like a rat in a maze. Blogging though seemed one step too many.

Then something turned up. Some pictures I thought I'd never ever find. Pictures of Blessed Sacrament Primary and Junior school where people started at five and left at fifteen. I went there at five, fell in love at seven and left at fifteen. When I went back many years later it had been knocked down and replaced with something more modern and with a few houses squeezed in where once there'd been a much larger playground.

I tell you, I spent ages searching the internet trying to find a visual record of where I'd learnt to read and write, and in-between times played. Nothing. Zero. Zilch. On one of my trips to Liverpool I'd even called into the Church Presbytery hoping there might be a photograph or two tucked in a chasuble. The priest was sympathetic. He murmured a blessing. I left empty handed.

And then yesterday - this. And it is exactly as I remembered, but you have to imagine red and tarnished bricks, slate roofs and hard grey surfaces where, if you fell, you knew about it.

The school gates where you were deposited or picked up. I've seen more attractive prisons, but we liked it...in the main, 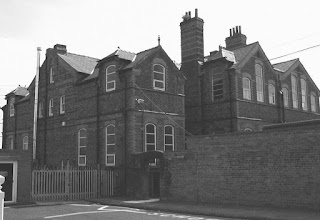 The Girls' Playground. The Boys' Playground was to the left, marked by a wall and a small exit point guarded by a teacher. Sometimes a nun.

Prefab classrooms at the other end of this playground. To the left, kids who had failed the 11+ were taught. The classroom to the right housed those preparing for the 11+ --- Grammar school, new bikes, leather satchels, and worldly success. 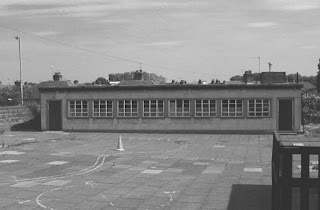 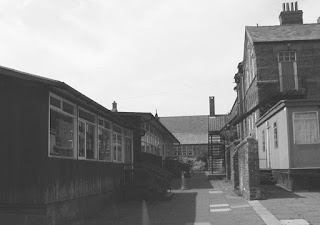 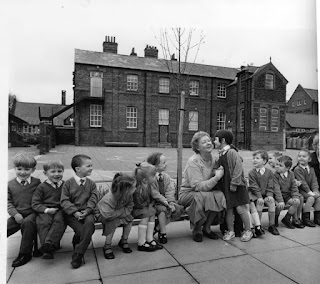 And another photo opportunity: A First Communion.

I saw a gorgeous prison in upstate NY

I'm glad you were finally able to find pictures.

How many kids did the school teach at one time? It looks pretty big.

Ours was tiny by comparison.

Mac, Victorian schools were built like workhouses...or prisons. The windows, though big were high up and opened by a long wooden pole with a hook at the end.

Maria, I can't remember how many children were in the school, though class size averaged forty, and we were taught by nuns and ex soldiers who had once faced the Hun and dealt with children in much the same way :)

Hi it’s my sisters class in the photo on the benches - where did you find it? She went to the infants between 1992-1995 so that’s when it would have been taken.

I wonder what year the holy communion picture was taken.? It looks like my younger sister could be on it but hard to guage the dates on these pics.

Hi Chestnuts23 There are only two groups I subscribe too, Foopers and the Walton group. It would have come from one of them. Like many (ref the comments) in Friends of Orrel Park, I spent ages looking for pictures of the school that formed my early years.

Hi Winrar, I have no idea when it was taken. I'm sorry.

A very young father ormsby on the first communion photo. I’d guess that was the 60’s

Gosh, Susan, thank you. I didn't recognise him. He was more portly in my memory ��

That teacher in the picture at the bottom is Mrs Manion. She took over as head mistress from Sister Norbett when I was in top infants. So that would have been taken during or after 1984/5.

Hi 'Unknown' Do you know when the wall separating the boys' playground from the girls' playground was demolished?. That weedy little sapling seems to have replaced it

Hi,sorry I don't, I can't recall a wall being there when I was there, I feel like it was one big space. That tree seems to be just in the middle of the yard! The smaller building on what you call the boys playground was the nursery when I was there. I remember wondering why it said "Boys" and "Girls" above different doors when we all used the same doors so that explains it if it used to be separate. I was in one of those prefab huts in Miss Morley's class for reception. It's nice to see pictures, it's exactly how I remember it. Apart from the missing wall, it doesn't sound like it changed much over the years.

This is so interesting, thank you! I went to Blessed Sac just before they moved from this site to the new one (from 95-98, as we moved during Year 2) and I remember this so well!

We didn't use the separate entrances either; the big metal gates wer where everyone left from, and the stone arch was where you left if you went home early or arrived late as the school office was just by there.

The prefabs were still there too. The school hall was through the door at the centre of the second photo. The third photo was the pre-school/nursery space and the prefab in the fourth photo was my reception classroom where we got taught by Mrs Lyons. Off to the left of that photograph unseen were little concrete gardens with some flowerbeds.

Thanks for putting these up!

Sarah, I missed your comment, hence the late reply. I'm glad I've solved the mystery sign of 'boys and girls'. And it is good how so much did stay the same - until the great demolition

Biggersib, thanks for the comment. I think for everyone, Blessed Sac has left indelible memories - what happened to you after you left?

So much nostalgia seeing these photographs. I was there from 1976-79 when Sister Norbett was in charge. Miss Morley (who I was deathly afraid of) and Mrs Walker taught year 1 (now we’d call reception) in the building in the photo labeled boys playground. Though happy to not be in Miss Morleys class I was insanely jealous of the real telephones and play house in her classroom. I struck gold in the next year - I had Miss Divine who all the kids loved, and looking back she was an amazing teacher. I still remember her sink or float challenge, guess what’s in the box by touch only and the prize competition to see how many items you could fit in a match box. I thought for sure I would win with 23, but sadly the winner had 36. Her classroom was to the right of the prefab building at the bottom of the playground. The third year I had Mrs Kerrigan, up the stairs in the old main building at the top of the girls playground. We still called them girls and boys even though anyone could play anywhere. I have tortured memories of picking bits of gravel from the playground out of my thighs listening to teacher read a story to us outside as a “treat”. And remember the gym in the old church hall on the other side of the gates? We would wave around like trees in the wind In our plimsoles.

Anon, when I was there, Mrs Morley was a sweetie who had a box of sweets for 'good' boys and girls and a 'ruler' rarely used for the bad.
Ref Gym, we threw coloured sandbags at each other, else race down the yard with large wooden hoops. Unbelievable.
Thanks for your comment. It adds to the history

I was there in the 1980's I was in Mrs Morleys class, I was terrified of her. I remember the big tree at the bottom of the playground and in the autumn we played helicopters with the sycamore seeds.