They never told me there'd be nightmares

There has been a muted but persistent campaign, for some time now, that I need to exercise more. A visit to friends who attended gym three or four times a week would earn me a 'look'. Understandably so because since the closure of the pool, my twice weekly early morning swim has been put on hold.

There was an alternative. Monmouth Boys School has a fine pool and gym, a snip at £340 a year. I considered what else £340 could buy me and entrenched myself in my soft leather recliner.
Until finally I broke. I’d spent an entire day sitting – working on the computer, watching TV, reading –– and it hit me that one day that would be all I’d be able to do. Worse––I was feeling so sluggardly––– It might be one day next week!

There was general disbelief when I announced my intention of becoming a gym bunny, but that was just the start of it. New trainers had to be bought, and then panic set in. Should I spend money on socks, sole infills to cushion shock, a sports bag for heaven’s sake? I put my foot down. No bag. Why would I need one? A plastic shopping bag had sufficed in the past. Okay, so this was Monmouth Boy’s School. I conceded the point. I’d use a Waitrose bag. It was hopeless. I won the day over sole infills and spanking new socks, but the bag, it appeared, was non-negotiable.  And now I’m the proud owner of a black Puma bag. Very smart it looks too.

The day came when money changed hands. I tried to persuade myself the £340 was a reasonable investment if I went four or five days a week, Hell, I might even get to look like Adonis or at least Vladimir Putin.

The following day I learned a hard lesson. Where I’d gone swimming before was a mile away. This gym and pool was two miles away, which meant I had to get up even earlier, leaving the house at 6 am  to arrive in a state of exhaustion  for when the doors opened.

First off the gym. Already busy. Awful lot of masochists in Monmouth. The guy there ascertained I hadn’t been to a gym for forty odd years and limited me to 5 minutes per machine.

Especially after the nightmares that kept be awake in the small hours of the morning. Nightmares or demons, they revolved around two figures, increasingly trenchant in their advice" 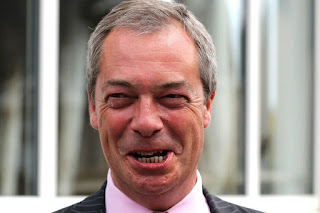 Nigel Farage extolling the virtues of the Cross trainer and urging me on for a half hour session, and the far more frightening 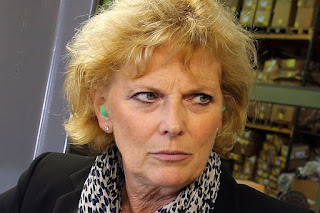 Anna Soubry barking at me (at one point I think she was) to stick with the rowing machine. They wouldn’t leave me alone as I tossed and turned, unable to sleep… already looking forward to my next visit to the gym.
Posted by Mike Keyton at 03:32

I wish I could guilt Greg into going to the gym with me.

And of course you need a proper bag. Plastic!?

I'm sure you'll find your rhythm soon. Glad you decided to join before your arteries hardened. :)

Maria , I can't believe I've almost overlooked your comment. The confusion of holidays and a broken routine,. And of course the torture of Gym. Ironically I've had to slow down because of a chest infection, always a problem with a recalcitrant lung :)
Again, apologies!