Bread in a bottle

I read an article in the New York Times recently about an English entrepreneur who is making and marketing Toast beer. It’s a crap idea but spun as craft ale, it may do well amongst the man-bun, hipster-beard brigade.  Using one slice of bread a bottle, the result is a brew with 'malt and citrus undertones.' Yay.

Apparently the Babylonians made bread beer. They also used the abacus and stamped little pictures in clay. It’s not surprising that Toast Beer has yet to make a profit or that it took months to find an American brewery willing to take the risk in brewing it. If you’ve ever tasted Kvass, a central European beer made from fermented rye bread you’ll understand why. It’s foul and the alcohol content is low. So much pain for so little gain.

Another problem is how you market it.  You don’t go out on a Saturday night bent on saving  the planet by drinking recycled bread. When you drink beer you’re drinking an image, history in every man-sized gulp: Bombardier, Imperial Pale Ale, Spitfire!  (Okay, not entirely image, alcohol content is important too, and every beer has its own unique taste. Just not bread)

One fine beer celebrates the C17th Battle of Medway when we thrashed the Dutch. You’re not going to be celebrating great acts of martial vigour with ‘Toast Ale.’ You don’t have much leeway to associate it with Empire or even the Battle of Britain—and yes Spitfire pilots did enjoy their toast with strong tea. The British are quite partial to toast, just not in a bottle. 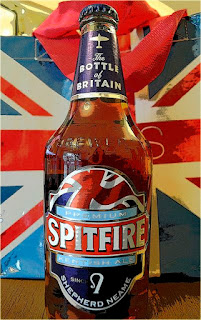 I love toast –  toast ‘soldiers’ dipped in a runny boiled egg—toast and dripping—toast slathered with marmalade or damson jam. You see the pattern here? I want to eat the bloody thing not drink it from nicely designed bottles, virtue replacing the traditional headey buzz.

And I want to read over-the top-blurbs.

A case in point—Kingpin from Brewdog Brewery:
“An uncompromising, bold and irreverent beer. Beer with a soul and a purpose. It’s the only thing we know. It’s the only thing we want to know. We have a terminal craziness to make the beers we want to drink.
Our approach is a modern day rebellion for flavour and choice. A last ditch stand to create beer that actually tastes of something. Beer like it was. Beer like it will be.”
I mean, this is splendid stuff reminiscent of Henry Vth 's  speech on the eve of Agincourt, And it continues:
“…this cold-conditioned King lies recumbent for a full five weeks. Expect the first wave of robust, full-bodied malt character to hit, then spicy citrus notes charge across the palate and an assertive bitter finish win the day.” It is the bloody Battle of Agincourt played out in a bottle.

What can Toast Beer offer in comparison? “Drink recycled bread with malt and citrus undertones?” And how many bottles would you have to drink to get even mildly tiddly? Too many, I suspect for try as I might I can find no information on its alcohol content. My rant is over but be warned. If the Murenger ever sells beer made from recycled bread the end of the world is nigh!

There's always some nut coming up with loony ideas and a fool willing to bankroll him.

It reminds me of when I read a bad book by a big name publisher. I always wonder what the publisher was thinking when they bought this book.

re: craft beer
My nephew-in-law runs a micro brewery. I've never tried any of his beers, but Greg says they're pretty stout. Apparently, my nephew in law has a following because he does sell the stuff, so I guess there's a market for everything.

Um, so if you wanted to lift a bottle and make a toast, you'd being toasting with toast?

This may be why I don't drink beer.

Maria, sorry for the slow response. My latest blog post explains why :) I used to make 'Craft Beer' in the sense I/ used to brew my own, and damn fine beer it was too. Problem is when you have forty gallons in the house you tend to drink it and then grow increasingly melancholy as you see the barrel go down. But toast beer . . . well you have to draw the line :)

Linda, see the excuse above - and that is one awful pun! :) But I suggest you don't drink beer because you've never tasted mine :) Perhaps I should print labels, 'Modesty Craft Beer'