I have a bookish knowledge of the English Civil War, The French, and Russian Revolutions. Words tell me how savage they were (though the real savagery of the English Civil War is often glossed over). As a child, I loved Baroness Orczy’s ‘Scarlet Pimpernel’, my first introduction to the French Revolution.  In those books the revolutionaries are incomprehensibly vengeful and savage, a thoroughly bad lot, lopping off heads willy-nilly. The aristocrats, on the other hand are well dressed and fragrant, especially the women. Similarly, in Boris Pasternak’s ‘Dr Zhivago’ the subtext is that it is really quite shameful that the Russian Revolution, these peasants and workers, got in the way of the good doctor’s romance. The Spanish Civil War, similarly. Why did the Republicans do such beastly things to Catholic priests?

A study of history will tell you why—but again, only in words. 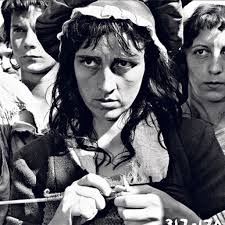 Not until now have I witnessed in others and experienced it in myself a similar visceral hatred and contempt for those who govern us, and as those who know me will testify, I’m an exceptionally mild man. Herefore, it must be said, that when the tumbrils come, Madame Defarge will have a companion, though my knitting won’t be a patch on hers. We live in interesting times. 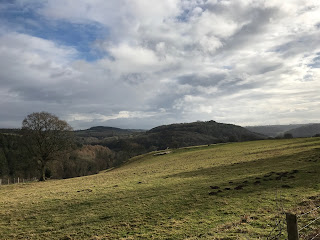 But away from blood and bouncing heads, a few days ago we strolled along a section of Offa’s Dyke to Redbrook. Strolled is a nice word. It involved a bloody steep climb to get there. Along the way we  passed an interesting tree (See what an uneventful life I lead, finding trees interesting) But some trees are interesting, especially when they bring back childhood memories of tree-goblins and gnomes. I convinced myself that on the other side of the trunk was a wooden door, and from the branches elves peeked out at me. When we’re all consumed by violence and blood, they’ll be still there wondering where we’ve all gone. 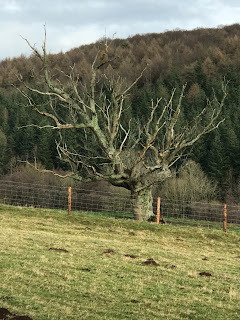 A little further on we saw a shepherd and his dog in action. On one level it was very picturesque seeing how with a few yips and yowls and a clever dog a field full of browsing sheep could be herded into a neat and small unit set to be moved. There was though one sheep, one small rebellion. It wanted no part of it, ignoring shepherd and dog in search of grass in an adjacent field. The rebellion was short lived, though it had nothing to do with shepherd and dog. The sheep made one tiny mistake. It looked back at the flock, uniform, compact and together. It paused, me willing it to go on – eat that damn grass – go for it!  Do sheep sigh? I imagined it did. Slowly at first but gathering pace it joined the flock, shepherd and dog looking on. 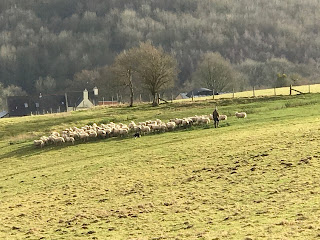 We walked back home, wondering as to who or what represents he Shepherd and Dog in our society? Media or police? At least we’re not led to the abattoir - other than exceptional circumstances. 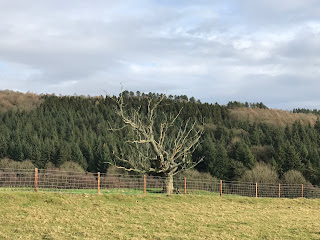 One last look at the tree where the gnomes live.

re: wondering as to who or what represents he Shepherd and Dog in our society? Media or police?

Interesting question. The dog certainly moves the sheep to where he wants it to go, much like the media.

What concerns me more is that so many people are content to be the sheep.

Bernadette agrees, Maria.
The Media.
It's replaced the medieval pulpit telling he peasants what to think.