To my mind, nothing beats wandering around an old English church on a cold winter’s day. I mightn’t have said that in the full flush of youth. Time and again you come across monuments or memorials to long dead sons plucked from the shires, some achieving glory, others killed in the service of empire.

The church of St Dubricius is a case in point. 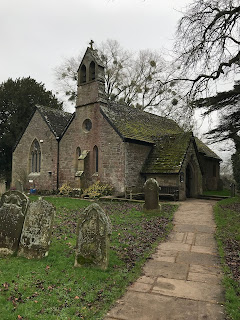 The photo below saves me much writing, but is only the prologue to the incredible story of Elizabeth Posthuma Gwillam. 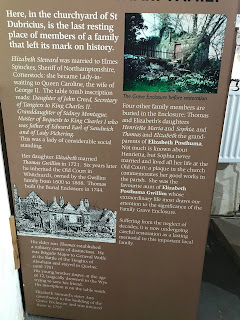 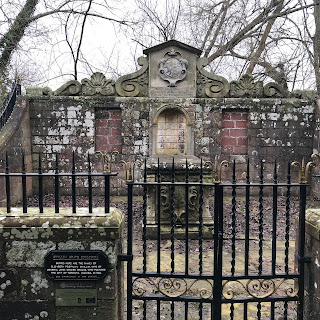 Elizabeth’s mother died at 38 shortly after giving birth to Elizabeth. This after 12 childless years of marriage. Her father had died 8 months earlier in Germany, hence the name ‘posthuma’ with its ambiguous connotations. She was brought up by her grandmother, Jemima Spinkes, (A name that surely belongs in a Dickens novel) but at 14 moved to Devon with her aunt Margaret who had just married a widower Admiral Graves.

By all accounts, Elizabeth was talented, fearless on a horse, a compulsive sketcher and artist; she spoke fluent French, some Spanish, excelled at cards and loved dancing. Not surprisingly, when the Admiral’s godson, John Simcoe, visited, he was entranced.

John Graves Simcoe was recuperating from wounds and years of service in the American wars of Independence. At the age of 25 he’d been a Captain in the Queen’s Rangers and championed new, guerrilla tactics against the rebels. He raged against the stupidity of bright red coats and European set battles in what was then a wilderness. 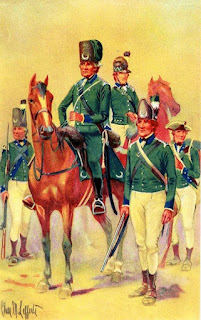 Later nicknamed Simcoe Rangers. Green was better than red and those pristine white trousers would be suitably filthy in no time at all

During the war he was wounded three times, once left for dead, then captured and exchanged whilst in the process of planning an escape. He was in Sir Henry Clinton’s words: ‘a man of shining courage.’ Far from his portrayal in an AMC series 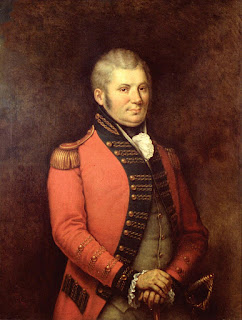 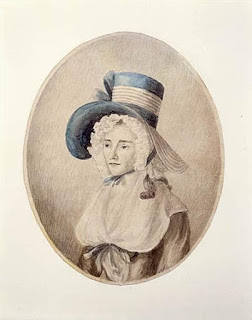 So, too, was his new wife as proved when, in 1791, she travelled with him to Canada on his appointment as Lieutenant Governor. They set said with their two-year-old daughter Sophie, and Francis, their new-born baby son. After a rough forty-six day crossing they reached Quebec at the height of a harsh Canadian winter, waited until conditions improved, and then sailed up the St Lawrence to Lake Ontario and a glorified log cabin. Whilst John Simcoe administered Upper Canada, Elizabeth sketched, mapped and explored on horseback, sometimes by canoe; in the process she gave birth to a daughter (Katherine) in a snow-bound tent.

Having established what became Toronto, Simcoe returned to England in 1796. Eight months later, as Major General Simcoe, he was fighting the French in San Domingo before returning home to reinforce the defences of the South West coast against Napoleon.

He died in 1806 leaving forty-four year old Elizabeth with an estate and nine children. The indomitable Elizabeth died in 1850, having lived to the ripe old age of 88. By all accounts she ran her estate along benevolent Christian lines, remained an inveterate traveller and retained her interest in all things Canadian. Toronto reciprocated in 1969 by renaming the August civic holiday as Simcoe day in honour of Canada’s first Lieutenant General and the man who abolished slavery in Canada seventy or so years before America.

So much from one small churchyard on a bleak winter's  day.

Sometimes I think I lead a very dull life by comparison. :)

re: uniform
Yeah, I never thought red was a very good color choice for warfare, other than hiding the blood.

Maria, when I read stories like that of the Simcoes my thirteen year old self resurfaces and with it thoughts of panning for gold, being pursued by Comanches - but not caught - exploring a wilderness or embarking on a great imperial venture - red coat optional. There was bad in the empire and there was also much good in terms of courage and spirit. I think the best way of judging the British Empire human nature writ large. For me, the real hero - by a whisker -in the Simcoe story is Elizabeth, though John had his moments