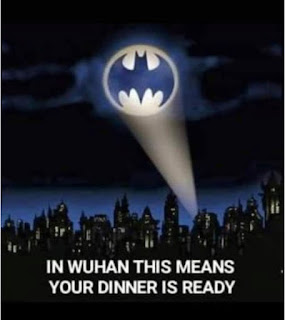 Covid 19 or Wuhan Flu. The former term boasts a degree of ‘neutral’ accuracy with its ‘CO’ for Coronavirus, its VI for Virus and D for Disease. At the same time its ‘neutrality’ is far from neutral. It deliberately obscures its origin as well as the historical record for the benefit of the Chinese state.

In the past, diseases were associated with their origins: Guinea Worm, West Nile Virus, German measles, Ross River Fever, Omsk Haemorrhagic Fever, Marburg Fever, Lassa Fever, Lyme Disease – the exception perhaps being Spanish Flu which had its origins elsewhere. To this day we use the term ‘Mexican Tummy’ and Delhi Belly for problems down under. So, when Trump was asked in a critical tone why he referred to the disease as ‘the Chinese Virus’ his answer reflected a long-standing pattern: ‘Because that is where it comes from.’

There is an argument that such terms as ‘Mexican Tummy’ or ‘Delhi Belly’ reflect not just knock-about humour but a past imperialist sense of superiority referenced in inferior hygiene; Now, that is a clear case of ‘punching down’. But associating Covid 19 with China is not in the same league. Are we really suggesting that we’re ‘punching down’ on one of the world’s super-powers? No, it’s the reverse. China is punching down on the rest of the world, denying any sense of responsibility for the pandemic.

When I read that China’s foreign ministry’s spokesman, Geng Shuang has condemned America’s use of the term: “We urge the U S to end this despicable practice. We are very angry and strongly oppose it,” my stomach turns. It turned even more when the all-but Chinese appointed Director-General of WHO, Tedros Ghebreyesus remarked that the term (the Chinese Virus’) is ‘painful to see’ and ‘more dangerous than the virus itself.’ What planet is he living on?

WHO/ UNESCO even published a pamphlet explaining how the term stigmatised a whole race of people, and then, in case we didn’t understand what stigmatise meant, went on to explain the term and how simple minded people confronted with the unknown might blame any and every Chinese person they met.

All I can say is, that when I was struck down with ‘Hong Kong’ flu in 1968, I didn’t go looking for a Chinese person to beat up. And yes, simple minded people exist, many of whom are well paid functionaries writing simple minded pamphlets.

I could argue that on many levels it deserves to be called the ‘Chinese Virus’ not just in its origins, but in the way the Chinese state made things far worse by its initial cover-up. Whistle-blowers were persecuted. upto the very last moment, the Chinese government denied the scale of the crisis, the Wuhan Municipal Health Commission declaring that ‘So far no infection has been found among medical staff, no proof of human-to-human transmission.’
The Chinese government only instituted a lockdown on January 23rd seven weeks after the virus first appeared and after more than 5 million people had already left Wuhan – many to Chinese textile factories in Northern Italy. Criminally, the same WHO that is now attempting to control our language passively connived in the deception by slavishly following the Chinese message that the infection was moderate until clearly it wasn’t.

But I confess, beyond all this, there is a deeper reason for my bias towards   ‘Chinese virus’ rather than Covid 19.  When I’m told I shouldn’t do or say something by a clearly corrupt authority I’m impelled to do the reverse. 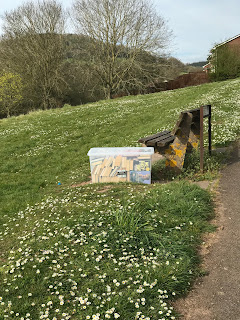 But on a sweeter note, a kindly person in our locality has left 'book boxes' here and there for those in lockdown with time on their hands. It's a lovely thought, but not perhaps a particularly safe option.

I remember when they renamed this coronavirus to Covid 19. They specifically said it was renamed so that the Chinese would not be blamed.

And it's laughable that the Chinese blame the Italians. A huge influx of Chinese went to Italy to start up a new textile plant. The mayor of this Italian city urged her citizens to hug a Chinese person (complete with photos) so as to prove the Italians were not racist. And now the Chinese have the audacity to blame the Italians? Not cool.

--And most deadly to the Italians since this is where their infection bloomed.

As for blaming the Americans. Meh! We're used to getting blamed for everything.

By the way, here's an interesting video I found from a video journalist who's lived in China for a decade. https://youtu.be/bpQFCcSI0pU

Interesting and pretty damning video. Thanks, Maria. Just thinking. Can you imagine the self-righteous outcry if the virus had come from the USA and the White House tried to put pressure on WHO to obscure the origins by a change of name?

I can't imagine it would work. WHO is already under investigation for not telling us sooner. Trump is threatening to hold back money from them until we get more info on the timeline of when WHO knew what.