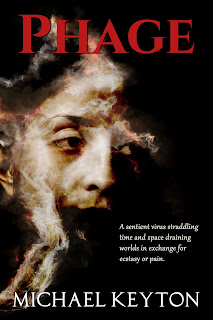 I enjoy horror and science fiction, more so if it's grounded in the human experience, more specifically the human experience of the ordinary Joe.  H G Wells hit upon the secret with War of the Worlds. I mean, the Martians appeared just outside Woking, for goodness sake, no doubt in search of Prince Andrew skulking in Pizza Hut.

John Wyndham followed along similar lines, writing the most extraordinary stories set within the ordinary: small towns or villages and involving ordinary people. Ramsey Campbell and Stephen King continue the tradition – because it’s a winning tradition. The unbelievable becomes more real when Mr and Mrs Brown are involved.

It’s why I enjoyed writing Phage. You can’t get much more ordinary than two Newport teachers and a self-confessed loser like Sam; you can’t get much more ordinary than the scruffy, down-at-heel but always magical Newport. Those living in Newport will recognise roads, perhaps even the house where one of the heroes lives. They’ll certainly recognise the Murenger pub; the school close to Tredegar House, but not, I hasten to add, the teachers. The teachers in the book are entirely generic, possibly to the disappointment of any hoping to spot Mr P or Mrs Y—or to the relief of Mr P or Mrs Y.

The story takes us from Newport, to China, Scotland, and Phoenix Arizona as a virus more sinister than Covid takes hold. It begins with Sam Weston:

‘Sam Weston spat in the sink, rinsed out his toothbrush and scraped at the pink crust on the stem before giving up. If there were germs there like that BBC woman said, they hadn’t bothered him yet. Nor had the million or so particles of faeces released on flushing the toilet. Sam did, however, have doubts on the safety of toothpaste. Fluoride was bad enough, but he’d long held the view that when the inevitable population cull became an imperative, it would be through dental hygiene.

From toothpaste to an ancient horror and all by Chapter 4.

‘Sam felt the gaze before he saw anything, a cold, incurious stare. The darkness shifted, but still he saw nothing even when it was upon him. Sam froze, unable to see or hear . . . or smell. He cringed at the thought of its touch. He closed and opened his eyes again and again until he no longer knew whether they were open or not; and his mind sought patterns where there were none.

The blackness was in his mind, its tendrils probing, seeking his fear . . . Images flickered like cards rapidly shuffled; cockroaches scuttled. . . spiders ...rats. A rat, its tail and haunch caught between tongue and teeth. Sam heaved and choked, both hands clawing—wrenching it from his mouth—another one taking its place as he hurled it away. He screamed, and darkness swallowed it whole.’

The challenge was to discover how Sam, Moira and John Grote defeat something ageless . . . or at least think they do.

I hope you enjoy the book.