Lamas of the Western Heavens. III

Huc and Gabot were fascinated by Tibetan women who, before leaving the house, daubed their faces with a kind of black sticky varnish to make themselves look ugly. Huc took on board the Tibetan explanation that it originated from an ancient decree during a period when licentious women were prone to corrupting the morals of lamas; he did however question why women put up with it.

He was equally fascinated by the Tibetan greeting, which involved taking off your hat and simultaneously putting out your tongue and scratching your ear. Perhaps more repelled than fascinated, Huc also describes how the Tibetans disposed of their dead. Amongst more conventional methods, bodies were left to rot or be eaten on mountain sides, and perhaps most bizarre of all, quartered and given to dogs. Some temples bred dogs especially for that purpose. I’m not too sure I’d be happy sleeping there, though the snoring might put them off.

Despite their Christian prejudices, both missionaries soon grew to love the Tibetans and bear witness to the tolerance and open-mindedness of those they met. They also record the profound distrust of the Tibetan for the Chinese.

For China, Tibet was strategically placed, a valuable ‘listening post’ to the outside world. For Tibet, China was a threat and kept at arms-length. Relations weren’t helped by Chinese arrogance. Chinese residents, for example, were perfectly happy to take Tibetan wives, but abandoned them and their daughters when returning to China. Their sons they took with them. Huc and Gabot had another reason to dislike the Chinese. When the Imperial Court heard of two French missionaries preaching in Tibet, pressure was brought to bear and, with great reluctance on their host’s part, they were forced to leave and return home.

Leaving Lhasa they entered Midchoukoung, a wild, rough country. ‘For five days we travelled through a maze of valleys, twisting to right and left, sometimes retracing out steps to avoid chasms or skirt impassable mountains.’ (see map below)

They navigated their way across mountains and ravines and on one occasion a precipitous glacier that demanded a profound sense of fun, trust in God and nerves of steel. In Huc’s words:

A magnificent yak was the first to go. He stepped forward to the edge of the plateau, stretched out his neck, sniffed the ice for a second, and blew steam in thick puffs through his wide nostrils. Then he bravely placed both forefeet on the glacier and shot off immediately as if propelled by a spring. He held his legs wide apart as he went down, but kept them still as if he had been made of marble. When he got to the bottom, he somersaulted, but ran off grunting and leaping across the snowfields.” When all the yaks were down, the men followed, sliding down on their bums and using their whips as rudders; in Huc’s words, faster than ‘steam trains.’

And if it wasn’t glaciers it was hair-raising bridges: 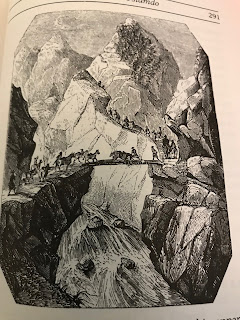 Huc becomes quite an authority on neck-breaking bridges:

'Chain bridges are quite common. To build them, they first fix on the bank as many iron clamps as there are to be chains; over the chains they put planks which they sometimes cover with a layer of earth. These bridges are extremely elastic—they are always provided with hand-rails.’  Hand-rails, well, praise be! For me, a person that’s afraid of heights, the illustrations are bad enough—visualising the terrible consequences of a misstep even worse 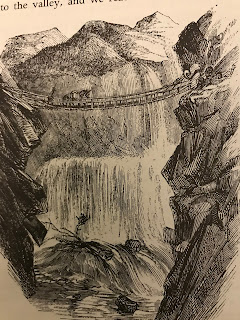 Ironically, the most terrifying part of their journey was what their Tibetan guides called flat land. That’s the good news. The ‘flat land’ was a ledge little more than a foot wide and with a precipitous drop to one side. The illustration and verbal description says it all: 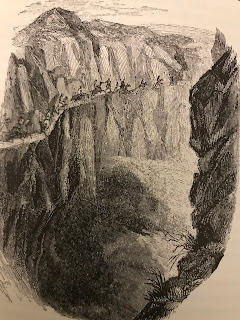 ‘We had to follow these defiles at a great height along a ledge so narrow that the horses had only just room to put down their hooves. As soon as we saw the yaks start off on this appalling path and heard the muffled roar of the waters far below, we lost our nerve and dismounted. But everyone immediately shouted at us to remount: the horses were used to it, they said, and would be more surefooted than we . . .We offered a prayer and set off after the others. We soon realised we could not have kept our footing for long on the evil slippery ground. We had the sensation of that an invincible force was dragging us down into fathomless depths below. For fear of becoming giddy we kept our faces towards the cliff, which was sometimes so sheer that there was no ledge at all for the horses feet: when that happened there were tree trunks for the horses to pass over, laid on  to stakes driven horizontally into the mountain. The very sight of these terrifying bridges made us come out into a cold sweat all over. Yet there was nothing to do but go ahead. After two whole days of being permanently suspended between life and death, we at last left this path.

And, thirty-six days after leaving Lhasa and covering 875 miles across mountains and defiles and gorges, they’d only succeeded in reaching Tsiamado It’s worth checking the map to see how far yet they had to go. 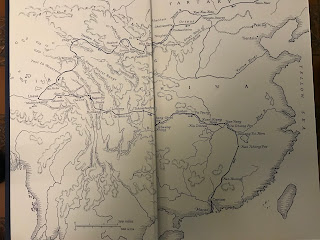 By the time they reached the Chinese frontier town of Ta Tsien Lou (Arrow Forge) in June 1846, they had been travelling for three months and had covered 1760 miles. From there, the journey to Macao was more straightforward but, as always, there’s a fly in the ointment:

'As we approached the Chinese frontier, the natives were less proud and less rough; they were just a little greedy, over polite and cunning.' They really didn't like the Chinese. Bless.

Having done all the groundwork both men hoped to found a permanent mission in Lhasa. Their hopes were dashed by the Vatican bureaucracy who gave the position to another missionary order. Gabot set off to appeal, but to no effect. The same Vatican bureaucracy packed him off to Brazil where he died of yellow fever in 1853.

Huc died more leisurely. His book achieved some success and he was sent to Peking  on another mission, but on the way,  his health broke down and he returned to France. He died in 1860 aged forty-seven never having recovered from his stupendous mission to Lhasa.

I don't think I have enough faith to get me across those narrow footpaths. I can't believe there are men stalwart enough to cross such expanses.