In our present time ‘Rage against the machine’ has been replaced by ‘Rage with the machine.’  Or, in other words, class politics have been replaced by identity politics—a lot of it organised by NGOs and financed by large corporations and billionaires. Excuse me, but I’ve never believed in turkeys voting for Christmas. Nor do I believe that vested interests are unaware of the old adage ‘Divide and Rule.’  Whether it’s Pro Woke or Anti Woke,  #MeToo, BLM, Antifa, LBQTQ,  Green, Hope not Hate, or Proud Boys and other right-wing equivalents, the end result is the same. Anger, rage, idealism is deflected and aimed at meaningless targets. Instead of a common enemy, rage is splintered and creates counter-rage in opposing groups. The devil feeds on both.

The exploiters, whether global or national include all of the above in their ranks and the hard truth remains that a black, hispanic, lesbian, or female captain of industry have little in common with their working class/unemployed counterparts.

Kwame Anthony Appiah’s grandfather was Sir Stafford Cripps, a Labour Chancellor of the Exchequer in the post war Labour government. Cripps’ daughter had married Appiah’s father, an Asante tribal leader who joined Nkrumah’s independence movement in Ghana. Because of his background he was equally at home in Ghana and the English Home Counties, which many found confusing. This confusion was due to what he termed as ‘essentialism.’ He argued that there was no essential identity called black or white, just as there is no essential identity when it comes to gender. But ‘identity’ can be weaponised, imprison those who fall for it and deflect justifiable rage from those who really deserve it. Essentialism is an affordable luxury for Appiah because he is of the right class. For those less well placed identity can be self inflicted or forced upon you.

George Orwell recognised it in his 1984 , when the state-sponsored ‘Hate Week’ was used to cathartic effect. Rulers use similar deflection techniques focusing on an external enemy when faced with domestic turmoil. Now we have internal enemies that an increasingly fractured society are encouraged to hate. 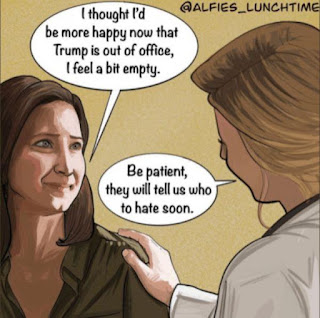 There are many reasons why an educated globalist elite would have hated Trump even though he came from the same privileged background. One of those reasons was the possibility that Trump rode the wave of an increasingly unified working class, largely white but gaining traction amongst their black and Latino counterparts. That would never do. As Trotsky observed, to make a revolution happen you needed an exploited class at the end of its tether, a leader or organised movement to channel it, and a ruling class that had lost its nerve or was otherwise split. A catalyst like war or disease and a demoralised military were also key factors.

I think it true to say that although charismatic, Trump lacked the ruthlessness, the intellectual rigour of a Lenin or Trotsky. He rode the wave but perhaps with no clear sense of direction. And unfortunately for those desperate for significant change, the media, global capitalism and the military/industrial complex were as one. It was those ranged against the powers that be—actually or potentially—that were split. Identity politics saw all manner of unpleasant things, but little of it ranged against the very rich. It was the poor, small entrepreneurs and a rapidly diminishing middleclass that suffered in protest and riot, the long term poor, black, white, or Hispanic, who continue to suffer from global capitalism and may yet suffer farther from military over-reach.

I don’t think the story is over. I do think that, if not on the road to hell, we’re heading for a suffocating ‘benevolent’ authoritarianism at best; independent thought manipulated or massaged out of existence by those who own the means of communication.