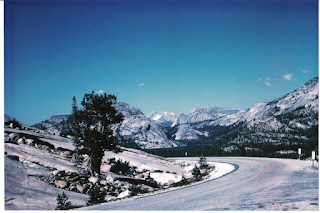 We drove over the Sierras to Yosemite: A very bald statement and rightly so. The Sierras are beyond my descriptive powers. Some say man’s brain is reaching the point beyond which science can go no further. Our mammalian brain, evolved from millennia on the African plains, will no longer be able to conceive the questions to be asked as our limits approach. And without questions there'll be answers beyond us. Across the Sierras my mammalian brain was reduced to a trancelike state absorbing image after image, each more powerful than the rest and none of it remembered.

We rendezvoused with another Aventours group at Lake Mono. Their tour guide was a friend of Gregs. It was also his birthday, so buckets of water and shaving foam seemed almost obligatory. This was what our mammalian brains, evolved from millennia on the African plains, were designed for, and we went for it like a bunch of chimps on speed. 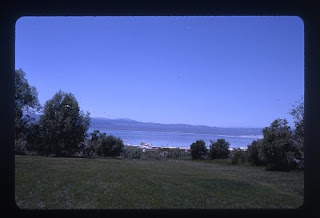 Afterwards I had one of those leisurely talks with Karen and Sheri Roberts – the kind that signify nothing and evaporate in the brain. It was a very hot day.

We reached Yosemite at night and had to put up our tents in the dark. No problem. We were a well oiled machine. Later that night I talked to Candy, a vibrant, bustling secretary, originally from Yorkshire but working in Stockholm. I was intrigued. No one’s called Candy in Yorkshire. Maybe that’s why she went to Stockholm.

Later still I spent a happy fifteen dollars on whiskey sours, talking men’s talk with Ron Tillet, a cheerful Australian. He’d tried to lure Kim and Sharon out for a drink with us, but with no success, and as the evening progressed he became increasingly annoyed over his non relationship with Kim. Such is life in a small enclosed bubble with too much to drink and too many hours to think, and Kim Haslinger was beautiful.
Posted by Mike Keyton at 03:48