The Hoover Dam, not without its warts 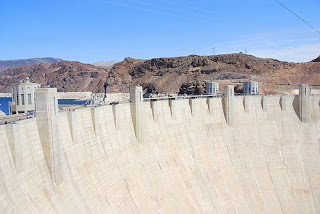 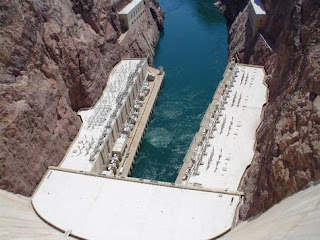 We set off early for the Hoover Dam, about 25 miles from Vegas. I didn’t know what to expect, and to be frank, was looking forward more to our ultimate destination, the Grand Canyon.

In the scraps that constituted what I optimistically called a diary, I apparently ‘learned’ that the dam, far from being a public works scheme, was largely built by convict labour.

Who told me that, and where he got his information from remains a puzzle. But all the records seem to suggest otherwise. Mind you, in terms of wages, work conditions and the total lack of concern for worker's safety, they might as well have been convicts. Other than explosions and similar mishaps, tunnels were often filled with carbon monoxide from vehicle exhaust. Truck drivers came down with CO poisoning and many died. The contractors, however, paid off the doctors to attribute death to other causes in order to avoid compensation...a salutary thought as you stare at the gleaming white concrete and magical, turquoise water.

That morning I was bombarded with figures and facts:

Its reserve of water, Lake Mead is the largest man made lake in the world and the Arizona Nevada border runs across it. The dam blocks the Colorado River in Black Canyon and it remains the largest dam in the western hemisphere:
660 ft thick base, and 45 ft crest, it stretches 1244 ft across the canyon. The water stored in Lake Mead irrigates three quarters of a million acres across the USA and half a million acres in Mexico.

But there is, perhaps, a darker side to the dam.

As the name suggests, the project was conceived and began under Hoover’s presidency, though Roosevelt largely gets the credit for it.* And whilst there, we accepted its visual and statistical triumphalism. The dam is, without doubt, a wonderful piece of engineering. What none of us knew then was its environmental cost.

The Colorado River no longer runs to the sea, but Las Vegas* exists, and against the whole grain of the surrounding ecology, a desert has been temporarily transformed into a tropical paradise – if Real Estate brochures are to be believed.

But for how long? Lake Mead’s level is falling fast as Vegas and other conurbations feed from its water, and all those various needs from competing interests that have arisen ever since the dam was built can only lead to future ‘water-wars’. Already, after a ten year drought, another $700 million has been spent on installing an additional pipeline lower into the diminishing lake, but what happens after that? 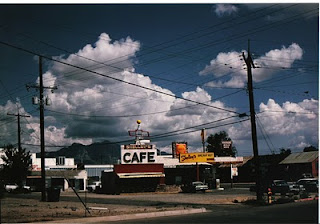 I like this picture. I remember falling asleep immediately after. The Hoover ones are 'borrowed' until my slides have been converted into scan-able prints.

We lunched on the outskirts of Klingman, Arizona- a garage, diner and motel in the wilderness. (Which makes us sound like omnivorous monsters.) It was dry and hot, with no sign of life. And then, much later, we reached the Grand Canyon and went to bed early, ready for the descent the following day.

Two things delayed sleep: the arrival of a bunch of irritating New Yorkers who earnestly assured us that only the supremely fit should consider walking down to its base, and that we were fool-hardy to try; and, even more irritating, Laura nodding her head and agreeing with them.

* In May 1931 the then Secretary of the Interior Harold Ickes tried to modify history in a thoroughly Stalinist measure, by renaming the Hoover dam - ‘Boulder dam’ a queasily partisan attempt to erase anything that might suggest that it wasn’t only Roosevelt who appreciated the merit of public works.

*Vegas extracts 90% of its water from Lake Meade
Posted by Mike Keyton at 06:55

Texas regularly gets requests to share our water (and juice) with the west.

I can't remember the particulars now, but they even tried to strong-arm us once, saying Texas *owed* them the water.

I think it will get worse, Maria. I assume you have a well on your land? Failing that there's always whisky - more satisfying than expensively packaged mineral water. And failing that, it's back to that old Alamo spirit :)