From Calico to Vegas 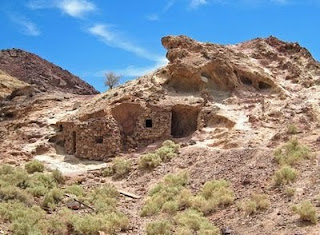 Destination – Vegas! The desert was bleak and evocative. We stopped at an old mining town called Calico. It was desolate, breathtakingly primitive, its huts made from rocks or protruding from caves. The land was a dull orange and grey, the sky washed in cloud and rain. An hour or two later a flash-flood swept across the great Nevada desert, a land where our tour guide solemnly told us it ‘it never rained’.


From one ghost town to another. In Vegas we stayed in a fairly plush hotel with a Jacuzzi, and a pool where we played blind man’s bluff. It was a good way to prepare ourselves for the evening to come

We walked to the centre of Vegas and there exhorted to take pictures - the selling point being that the lights were so vivid and intense we wouldn’t need flash. I took my obligatory pictures of virulent greens and pinks and blues. It didn’t take long, and then we were off to our first casino. I thought Reno was the Devil’s Playground. It was merely his porch. This place redefined hedonism.

And we had a whole night.

In one casino – The Lucky Wagon – a fountain gushed out champagne that you drank from paper cups. It wasn’t first class champagne but it was profligate and free and never-ending. Have you ever seen those women near chocolate fountains, they lurk, suck strawberries, fake conversation all the time pouncing with the remorseless rhythm of the metronome. Trapped by chocolate. With me it was champagne. I couldn’t believe it. Maybe hell wasn’t so bad after all.

And then at 1a.m it trickled to a stop

As one we sighed, those brave few topers who’d stayed.

And then the devil had mercy. At 1.15 it gushed forth once more – this time Bloody Marys. It didn’t go with champagne, but we persevered.

At two am I was feeling peckish and located a casino that offered thirty course dinners for three dollars. By this time the pattern was clear. Casinos didn’t really want their customers to go anywhere else or notice the transition from night to day. No Casino we saw had windows, but many had crèches for kiddies so father and mother could gamble with blithe conscience. These crèches also offered unlimited food, along with small toddler-sized fruit machines to start them off young.
In short there was never any trouble in getting into a casino, the problem was mustering the will to get out. 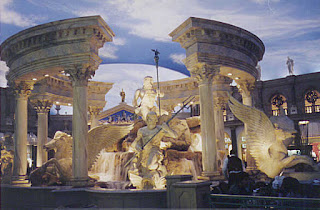 Daphne and I were walking the sidewalk when suddenly she glided from me, caught on an escalator that was easing her off to fresh temptation: Caesars Palace. I followed, bemused by marbled Roman dignitaries, staring at all and sundry in blank disapproval. Behind them gardens glowed in green and pink. And then we were inside, a vast and gaudy space, surprisingly empty. 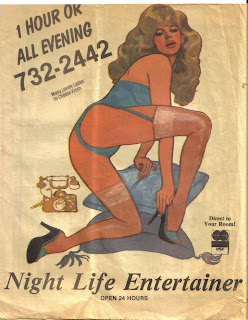 Even more interesting inside. We had nothing like this in Wales


Every motel has an ‘admag’ advertising call-girls in graphic and colourful detail, price, appearance and ‘what they do’ are all included. It made for good reading which in itself made for safe sex, I suppose, but where were these creatures of the night?

It was Dana who found out. Walking back from the casino and losing her way she was mistaken for a call girl, not by a punter but by those already in situ. She was rounded on and vigorously warned off from ‘occupied territory’. I don’t know what mortified her most, the ‘verbal’ or being mistaken for significant competition.

We left the motel early evening. The transition from lurid to desert was dramatic. The sun was setting behind distant mountains that fringed the desert. The effect was holographic, the mountains a radio-active pink and almost transparent.

Sodom, Gomorrah and Vegas. Great for two days, maybe three; just don’t be there when retribution strikes. It was horrible and glamorous, and a little unreal. One day it would be like Calico 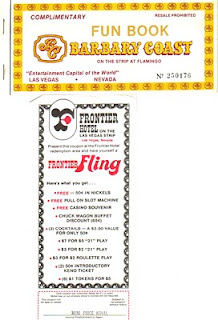 Las Vegas. What an industry. I've never had any desire to go.

I don't gamble. I rarely drink. And I prefer to do my debauchery at home.

I am shocked and amazed they were able to pry you away from that booze fountain. LOL.

Las Vegas, what a strange though fascinating place. I’ve never had the opportunity to play the tourist, but work, work, work. Some of the crazy lighting effects at Cesar’s, The Venetian, and a handful of lesser haunts, are courtesy of yours truly, but I’ve never been mistaken for a hooker. Just my luck.

You’re right. One day, the desert will reclaim the plastic and neon and it will be Calico all over again.

I am shocked and amazed they were able to pry you away from that booze fountain.

I was hungry, Maria

And Carlos, if you're behind some of that lighting there'll never be a need for you to don fishnets and pumps : )

You should write travel books. I've been missing out on you for a while, but in the throes of fever and illness, I have time to catch up. It's great. I wish I could read it in paper form instead, on the way to the bus, dreaming of travels to come.

Thanks, Malin, that's a kind thing you say. I hope though you get better soon - even if you do read less of my blog in consequence : )