‘Drove all the way to Atlanta, a truly boring city:’ So said the diary entry. Bald and to the point. It’s accuracy has to be weighed against the fact that we’d been travelling four weeks or more over-land, and had covered thousands of miles. We’d seen parts of America I’d previously only dreamt about, seen countless faces, talked and listened to just about every variant of the American accent, and experienced the subtle differences in every state. It was, in short, the geographic and cultural equivalent of Petronius’s ‘Satyricon’ as filmed by Fellini. In terms of sensory overload it felt like that, and so by the East coast we were jaded, our judgement impaired. Hmm…is that the royal ‘we’ or have I just off-loaded my prejudices on the entire group?

We were taken to a very tatty ‘Gone with the Wind’ museum. No doubt fascinating for those interested in Southern belle dresses and old movie posters. Apparently those new to the phenomenon are termed Neophytes. Fans of the book and film are called ‘Windies’ – though I can think of a riper name. The souvenir says it all.. 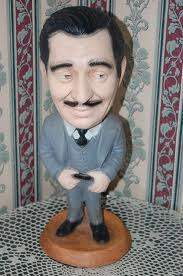 Officially Clark Gable, though it puts me in mind of Carlos Cortes

Later I joined Carol and Laura at a dreadful ‘English’ pub called Reggie’s. So many things wrong with it: potted palms, and pictures of Churchill and the Queen. Yup, can’t move for potted plants and portraits of Churchill and the Queen in pubs all over Britain. I read one fan of the pub extolling its virtues online: the sum total being it sold Whitbread Bitter. Dearie me. What made things worse was that Laura grossly over-tipped with money from the common kitty, which offended my Capricornian sensibilities.

But to make amends for a possibly sour judgement I did my research, refreshed and over a pint of beer. Not Whitbreads.

The city and surrounding area was built upon land purchased from the Cherokee and Creek in 1822, the first white settlement being ‘Decatur’ named in honour of Stephen Decatur – a naval commander, and the first American celebrated as a national military hero who had not played a role in the American Revolution.

He’d made his name from fighting Barbary pirates and thus I discovered the origin of those lines American marines will sing at the drop of a hat: ‘from the halls of Montezuma to the shores of Tripoli...’ That had always puzzled me. Mind, the Halls of Montezuma still does.

I wish we’d visited Decatur. I like how in the 1830’s it rejected the Western and Atlantic Railroad’s plans to make Decatur the southernmost stop on its railroad. Decatur had no taste for the noise and pollution, the hubbub being such a major terminus would involve. As a result the railroad founded a new city to the west and southwest of Decatur ie Atlanta.

It’s hard to feel too much for the travails of Scarlett O’Hara and the burning of Atlanta. Thirty years before that Atlanta’s founding fathers had been responsible for the forcible deportation of the Cherokee which killed 4000 Native Americans. Decatur, being the base camp for Sherman, presumably escaped the worst of the fire.
I think the last word should go to the eccentric suburb of Decatur:

Shallowford Road, which led to the Shallow Ford, has been renamed Clairmont Avenue, probably because it does not go to, from or past any place called Clairmont. Covington Road is now Sycamore Street, probably because it leads to Covington and has no Sycamores on it. Nelson's Ferry Road, named after the local family which ran the ferry at the Chattahoochee end of the road, has been named Ponce de Leon after a family prominent, before Castro, in Havana, Cuba.— Mitchell, Stephens, "A Tentative Reconstruction of the Decatur Town Map of 1823", Atlanta Historical Bulletin, No.30, p.8, 1965.
Posted by Mike Keyton at 04:56

No wonder women fall madly in love with him. Either that or it's the powder he puts in their drinks.

OMG, that Clark Gable souvenir has just rocketed to the top of my Must Have list. Love it!

Whitbreads? I bet there was some Watneys Red Barrel lurking behind those potted palms...