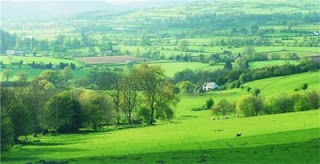 I was sitting between an elderly man with far-away eyes, and an even older woman with an imperial spine and watchful look. A large window to my right opened out to a sea of corn and the rolling hills of Herefordshire. And before me stretched a table laden with salads, various flans, a huge game pie, coffee and brandy cake rich with cream and so moist it oozed on a glance. There were other desserts, a massive Kiwi Pavlova; looming behind that an even larger cheeseboard.

The elderly lady, for some reason, was thinking on breakfast and ascertained that most of us didn’t eat it, or nibbled on toast. A few brave souls risked muesli with low fat milk. This greatly puzzled her. ‘I’ve spent ninety years eating a full English breakfast,’ and she proceeded to list, with some relish, the bacon and eggs, sausage, tomatoes, mushrooms and fried bread she attacked each and every morning. There wasn’t an ounce of fat on her. ‘Never did much me harm,’ she concluded, her tone curious rather than an inflammatory attack on a mineral water and Statin obsessed culture.

The man to my left coughed, the far-away look replaced by a smile. ‘There have been studies.’ He wiped his lips. ‘These people who live extraordinary long lives all had high cholesterol levels.’

Well, knock me down with a feather. The table glared in a Damascene light. A Michael Crichton moment. So high cholesterol was the key to a long and healthy life! And all those years of fibre chewing; was it all part of some great, far reaching conspiracy – actuarial calculation and science - a way of dealing with aging populations and spiralling pension costs? Were we consuming aspirin and Statins, slurping tubs of cholesterol-beating, low fat spread and munching vegetables - Gaderene hypochondriacs – worried lemmings unwittingly rushing to an early grave?

I drank more wine and considered the matter. The old man could have been talking nonsense, but there was more game pie, and the coffee and brandy cake looked awfully good, and then the cheese of course. 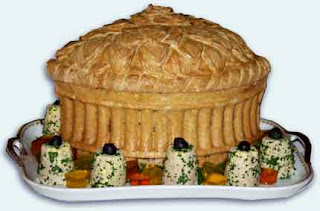 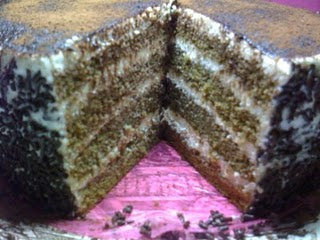 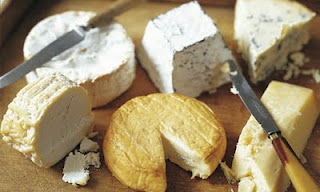 At worse it would provide the plot for a third-rate thriller, perhaps add a few more conspiracy theories to the net and a few more pounds to the waist.
Posted by Mike Keyton at 14:21

OMG! two of my weaknesses: Cheese and any kind of pound cake. Hmmm that coffee and brandy cake looks delicious to go with a cup of coffee (or two) ;)
I, too, believe that all these studies are just rubbish. I think all types of food are good as long as you don't over do it. Indulging from time to time is fine, but making it a habit, well, that's just signing your own death certificate. ;)

Ah, but the game pie. That was worth a death warrent in itself. They eat game pie in heaven.

I've never tasted game pie, but I'm always game for anything with pie in it.

I've never tasted game pie, but I'm always game for anything with pie in it., Groan :)