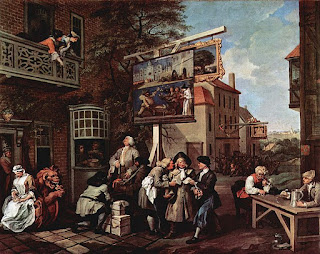 I was appalled to read that our politicians not only wish us to fund their lavish lifestyle, but also fund their parties to peddle their lies and half-truths. All we need now is legislation to compel us to vote and we’ll inhabit the seventh circle of hell.

Give me the good old days. I want to sell my vote for a barrel of ale. I want to be cooped, gathered up from the street dead drunk and locked away until voting day. I want to belong to a small union of voters who’d sell their seat to the richest in exchange for a tangible reward. And don’t tell me that was because only a small proportion of people then enjoyed the vote. A majority today don’t vote. Why should they when the choice is between Punch and Judy, Tweedledum and Tweedledee? We have made a country ‘Safe for democracy’.

I know we now sneer at the rotten boroughs of old England, those boroughs so small their votes could be bought. A source of corruption we say. Colonial nabobs, invariably red-faced and corrupt, buying seats like Russians buy football teams. The reality is that many of these ‘Nabobs’ self-made men, proved to be the most capable and independent-minded men in the political system.

I know we now snigger at those electors who, allowed for the first time to vote in secret, would approach their patron or lord and ask them which way they would want them to vote. Such servile deference. Not like constituencies today so enthralled by ‘culture’ and party machines that they’d vote for a pig if it wore the right colours.

In a previous age English aristocrats had pedigree - brands if you will. You knew who you were with a Salisbury, a Russell or Grey, much as you do with a Toshiba or Sony, a Pepsi, or Coke. Pedigree or long established brand; both take the long view or perish; both factor in historical and cultural accountability. Which aristocrat or indeed the next head of Microsoft or Apple want to see their brand perish?

An aristocrat was born, not voted for, but imbibed a sense of public duty along with a degree of historical and cultural accountability. Can that be said of the faceless men who rule us now? They come and go having sucked the trough dry and accountable to none. We’re ruled by leeches sensing the banquet is nearing its end.

Democracy in prosperous countries is like a finely laid table, with its creamy linen and silver tableware, its floral arrangements, decanters and gleaming tureens. Whip away the cloth and the table remains, privilege and power.

And if that power, in whatever country, faces serious challenge, the table cloth with its fables and pretence, is the first to go. In that sense we should wag the finger lightly at the Chinese, Syria, and those other regimes who cannot afford or who have not yet bought the tablecloth.

With Greece denied its referendum and, with Italy, ruled by unelected technocrats, it is clear that democracy has a set price, and in uncertain futures, the contours of power will reveal themselves in other countries across the world.

The status quo knows what it wants, knows what it doesn’t want. And protest which knows only the latter foams against it like surf against rock. Sometimes ‘great changes' occur - captured on camera and media tagged. But nothing really changes, not for long. Even when Lenin’s preconditions* for a successful revolution occur, the new status quo follows the contours of power with fractal inevitability. The table remains.

• A ruling class that is split or has lost its nerve
• An unreliable military
• An underclass at the end of its tether
• A disciplined, revolutionary leadership.
Posted by Mike Keyton at 03:21

Tables are sometimes toppled and reset--hence the birth of the US for one. (at least this is the view in the US)

I'd speculate that regardless of the government, no matter how benign, the bottom of the silver already came tarnished.

I'd settle for fewer puppet masters. But I know that'll never happen. There are too many people in the world to control. To sedate the populace requires the tools of panaceas and distraction, the stock and trade of politicians the world over.

History continues to repeat itself.

Tables are sometimes toppled and reset--hence the birth of the US for one. (at least this is the view in the US) but the table is not re-invented. It just gets a makeover and the world carries on - as you say in your last line.

Fabulous post, Mike! I love the table analogy--yes, we over here across the pond seem to be deciding that stupidity is the way to go-(setting our table with plastic forks and knives) 7 billion and counting--remember that..

Thanks for your comment on my blog-are you self-published? Social media seems to be the marketing ploy over here...would love to hear your experiences!

Thanks, Nikki. You lost me with the 7 billion, debt? Population? or plastic forks? :) But at least you live in a very nice part of the world. I spent a wonderful week in Seattle and visited the Cascades, which is quite near you, I think. It's in my blog - under the America label.
Ref social marketing, I only know what I've picked up on the net, that and gut instinct. But my gut is not very clever

sorry--7 billion people on the planet now--(apropos of nothing)

Yes, this area is quite beautiful and I truly love the Cedars and Douglas Firs--the rain doesn't even bother me. I'll look for your Seattle/Cascade blog...

WOW! Well said, Mike. I could almost hear you furiously typing this post ;)
I wish we voters had more power so we could get rid of some clowns who call themselves politicians (without wasting taxpayers money or shedding any blood) but that would be Utopia, right?.

Claudia, sorry for the delay. Been out and about. I guess the bottom line is that all political systems have to take into account the flaws in human nature. And people have to think more and see behind the flim-flam. Think. Not emote, which we're seeing too much of at the moment. A pulpit moment. Sorry :)