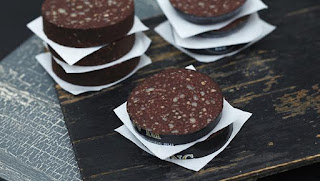 Black pudding is a visual feast. It glistens and crumbles on the fork. A single mouthful justifies the millions of years that have led to perfectly formed mouths and taste buds.

The one served at the Ardoe house hotel sat on the plate between the bacon, sausage and fried egg. It looked inoffensive. I savoured the moment before cutting into it and raising it to my lips.

It was like chewing pulped cardboard with the faintest aftertaste of manure. Must be some mistake. Nothing can go wrong with black pudding: a savoury mix of barley, pig fat and blood. I left it for a bit and attacked the egg; went back to the black pudding. Dry. Definitely something wrong. Manufactured slurry. A normal person would have left it. The world is full of black puddings.

I tried again, caught by obsession, a history of childhood rationing and just plain stupidity, until the damn thing was gone.

What was I doing at Ardoe House glooming over black pudding? 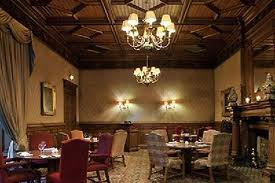 We had gone to Aberdeen for our son’s graduation and arrived at Jury’s Inn hotel just after midnight. This was after a ten hour journey by train which involved a 90 minute wait for our final connection on a freezing Edinburgh station. Arctic winds screamed through flesh and bone and precipitated hallucinations. How else could I explain the vision of a man with a Desperate Dan chin, clad only in red T shirt and knee length shorts? He stood arms folded, oblivious to the polar weather. His legs bulged in a Macdonald tartan of varicose veins, the only hint of discomfort. And then he vanished.

Eventually we stumbled into the foyer of the Jury Inn, seeking a warm bed and looking forward to breakfast. Unlike the Holy Family, we had booked our rooms weeks ago and confirmed it earlier that morning, warning them that we would be late. ‘No problem’ we were assured.

Only there was. The young male receptionist told us we didn’t have a room. His tone of voice suggested mild displeasure, as though we were somehow to blame for him being in this embarrassing situation. The mild displeasure turned to puzzlement when we didn’t turn cartwheels of joy on finding out that they had found another room for us in a hotel, which involved a ten mile taxi-ride.

Voices were raised, and then a young Irishman emerged and did brilliantly what the young receptionist should have done in the first place. He once again explained they were victims to a double-booking made by a central computer and that as a result the hotel was full and then, instead of just making the best of a bad situation, he exceeded anything we’d anticipated: The alternative hotel was superb (apart from the black-pudding, but I absolve him from blame for that) Our night there was at a discounted rate and our second night at the Jury’s Inn, for which there was a room available would be complimentary – breakfast included. 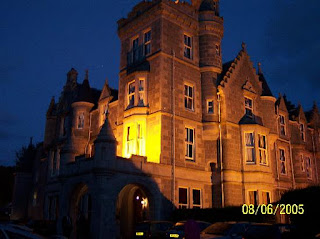 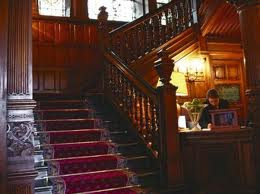 The following day a free taxi took us back to the original hotel. We were treated like VIP’s and I realised for the first time what the very rich take for granted.

The lesson is that most cock-ups can be resolved through charm – being Irish helps – and daring to be generous. I feel now like some kind of unpaid ambassador for the Jury Inn chain. Ardoe House too, though my stomach is preparing a Minority Report on the Black pudding. 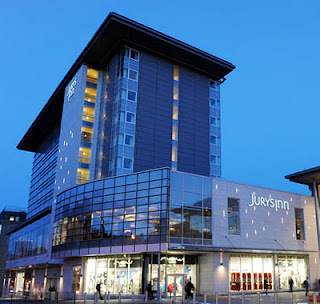 Hi Mike,
Before I read your post, I looked at the photo and thought it was some sort of dessert (chocolate to be exact). I started reading until I hit the key ingredients. OMG! Such a nice and deceptive name for such a disgusting recipe. Please include me in your Minority Report; I'll be on your top 10 since I'm a vegetarian ;)

And everyone says Canadians are weird for our love of poutine. Jeesh. I too thought the picture was of chocolate at first because I didn't read the title.

To be honest, I didn't really know what black pudding was until now. It sounds perfectlly disgusting, which means when made right it's probably delicious, yes?

My captch by the way is "gravabun"...don't know why that makes me giggle.

I'd heard of black pudding but hadn't a clue the could be stacked up like ground beef patties.

Sorry to hear your experience with the one mentioned here was less than pleasing.

Glad that your rooming jam was massaged into a semblance of an acceptable alternative.

I wonder what else you're looking to add to this Minority Report? Hmm...

"A normal person would have left it." I agree. :) Nothing on this earth would tempt me to try black pudding. Yuk.

Great pictures and I'm glad everything was resolved and that you were treated like VIPs.

I'll pass on the pudding. :P

Your experience with the hotel reminds me how one gesture can make or break a trip.

I hope you wrote the management on the fine clerk and how he saved your stay--and your opinion of their services.

Renee, you're right. If it wasn't delcious it wouldn't have been around for so long, and in so many cultures.

Angela, it's worth googling images of black pudding. Traditionally, at least in the North of England they're made in the form of a huge bunch of grapes, which you slice to order. Now, for convenience they're manufactured as large sausages which you slice aka the picture

Shirley, you're weird. I'm disappointed. A Lancashire lass and close to the capital of Black puddings...Are you sure you're not Yorkshire? They get everywhere.

Maria, Maria, another one who fails to see the beauty in a black pudding : (

But you're right about the importance of the imaginative gesture. We do intend to write.

Hehehe sounds like you got the best out of a bad situation. :-)

Except for the black pudding, of course.