Friends are where you find them

You often hear that social networks are cold facsimiles of the real thing; that there are no real friendships in cyberspace. The reverse is true. It may be something peculiar to writers, but not necessarily. In my experience - whether you want it or not - who you are and who you’d like to be unavoidably comes through. Minds communicate with minds. Spirits with spirits. In real life attractive spirits sometimes remain undiscovered behind unattractive flesh.

It wasn’t always so

Computer screens were once black with virulent green or white text. I grew up in an age of Acorns, Winchesters, and very small screens. School Departments were encouraged – no – exhorted to make use of them. Lesson plans were meticulously drawn whereby, in theory, a class of thirty might profitably use a single computer with a 14 inch screen. The students weren’t fooled, but humoured us. 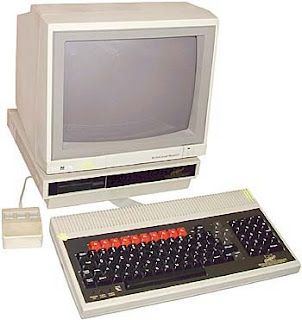 We went on training courses, each one only marginally better than the last…And then at last came the Internet.

We went to a training course at Caerleon. Our instructor, a man called Roy, fizzed with excitement as he popped between terminals and occasionally glanced at a blank screen behind him.

At last he was ready, but we weren’t. We had to be talked to, the concept explained. He enthused on how this made the world smaller, how it brought people together. He foresaw international cooperation, friendliness, talked of courtesy and internet etiquette. In the mean time we stared at the screen still blank, but promising great things.

And then Roy smiled. His jaw dropped an inch - like a snake poised to swallow a small mouse or rabbit. His lips extended in a show of teeth before the jaw ascended, the smile disappeared. He swivelled, pressing a key in the process and the screen came to life.

An elderly American smiled back at us. His was a normal smile. We were entranced. There were books behind him, a window allowing us glimpses of…American trees. And he was talking, his voice brisk like a dry Savannah cricket.

We wanted to say ‘hello’ back to him but wondered whether he would hear us.

Two ‘hellos’ – more than enough for Roy. His jaw dropped as if ready to snack and the teeth came and went. He lowered the sound; talked again of the brotherhood of man. Behind him the American waved, his voice occasionally breaking through when he shouted:

Roy was oblivious. His was the only voice worth listening to. The American conjured up for our convenience was nothing more than that, a convenience. It was my first experience of the less attractive side of what was to come. Roy was a user. He incarnated the blind egoism found everywhere on the net today – and in real life, too.

You make friends where you find them, in cyberspace or on the street. One is not necessarily better than the other.
Posted by Mike Keyton at 04:09

This is so true.

There was a time I'd stop traffic if I walked out in a snug dress, now people stop only because it's illegal to hit a pedestrian.

Hmmm. I think traffic would stop for me if I walked out in a snug dress, though probably for the wrong reasons

The only thing that matters to me is the continuous honing of the ability to tell who is a friend and who isn't, and to be open and ready to maintain a friendship that doesn't come from daily
or physical exchange.

I've changed homes, jobs and circles of acquaintances so often over the past years,
that "cyberfriends" are the only stable friends I have. But this way I can make friends I really have something in common with other than my physical location at the time, which is awesome! And I'm very thankful for every friend I've made this way -- including you, Mike. Would we have come to share the little bits we shared online in real life too? I think we would've missed something. :)

It's an excellent point you make, Vero. In an ultra mobile world 'cyberspace' (for want of a better term) can recreate the best of what constituted a neighbourhood or village - with none of the narrowness. I'll qualify that last statement. The danger is that like attracts like which does pose the danger of ultimate narrowness. Cyberspace also encourages self segregation. But hold on there. I'm becoming Mr Negative : ) We both agree cyberspace opens so many doors, and you're one of them. I'm really glad I met you, too.

Cyberspace is pretty darn neat. I wouldn't have met you otherwise. Glad to have the best blogger friends :)

I remember when my son was at freshman at Ohio U. He told me he'd been up all night. Studying (I hoped)? No, he was online playing a computer game with a student at UCLA and a guy in England. I couldn't quite get my mind around it.

Now my online friends are every bit as real and important as my local ones.

I'd be lost without my online friends. Years back, when I had a proper job, I used to love the coffee-break talk, laughter and gossip. Thanks to cyberspace, I have the same thing - but without the need to get dressed up and look fairly smart. :)

Kerri, you're right. Cyberspace is the neatest place and friends are friends alive or dead or somewhere on a screen.

LD It's pretty wonderful how this technology has brought so many people together. Gaming or whatever.

Shirley Good point about not getting dressed up and looking fairly smart. It's why I stay in the background when my family skype : )

A few me personally, that I usually equal your beamy cerise

prophylactic eyelash considering that it style which means that

scintillating not to mention dynamical. Yet, accountant los angels

you in to the belle within the softball.link:www.jimmychoobagssales.com

wao this is belong to black and white age of computer