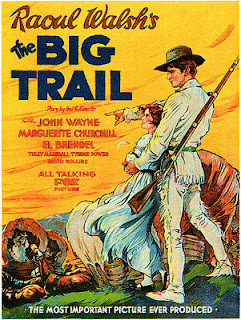 The first ‘talkie’, the Jazz Singer, came out in 1927. Just three years later came The Big Trail’ - a masterpiece and a landmark in film history. It lost money at the time and since then has been largely forgotten.

The plot is straightforward. A young John Wayne is seeking two murderers, ‘Red Flack’ played by Tyrone Power senior, and his henchman the villainous Lopez. All three become involved with a large California-bound wagon train. There follows murder and romance as the pioneers conquer blistering deserts, fierce snowstorms, rivers, forests and huge cliffs over which wagons, horses and oxen have to be lowered by rope.

The story then is simple and by our standards predictable; the acting, too, is haphazard. Tyrone Power senior, as the murderous Red Flack, is ham to the bone, bellowing and growling like a wounded bear or Neanderthal. There is a lovely documentary feel to scenes showing the Indian encampment, but then this is spoilt  when the same Indians attack the wagon train The train is drawn in a tight, protective circle and the Indians just ride round and round it shrieking but doing little else until half of them are shot and the rest still shrieking retreat. It’s a visual cliché but perhaps first shown in The Big Trail.

But there is much more to the film than story or acting. It’s the sheer scale of Raoul Walsh’s ambition that takes the breath away. Each scene was filmed twice first in 35 –millimeter for general release,  and then in 65mm. This was the ‘Fox Grandeur’ wide-screen process that would not be replicated until 1953 with ‘The Robe’. Just to make things that little bit more expensive, each scene was filmed in French and German with totally different casts. It makes Michael Cimino’s flawed masterpiece ‘Heaven’s Gate’ modest in comparison.

There is also the ‘miracle’ factor that led to its rediscovery. Miracle factor…perhaps not. Ingenuity and human will sums it up better. When, in the 1980’s, the Museum of Modern Art in New York thought of preserving the one remaining 65mm copy they found the negative had shrunk and was too fragile to copy. Film labs told them it was an impossible task. One man, Karl Malkames, thought otherwise, building a specially designed printer that copied it at one frame a second. It took him a year, and it is due to Karl Malkames that the film now exists in CinemaScope.

When you consider that ‘talking pictures’ were still in their infancy, and that the film was shot on location along much of the old Oregon Trail, the feat is amazing. And there are so many layers in the film, so many things to admire. Landscape dominates, frame after frame bringing images of the old west into C21st homes. Raoul Walsh also pays meticulous attention to composition, every scene a Breughel with a western twang and swagger.

There are a few saggy moments, frames showing suckling babies, suckling foals, suckling cats, suckling pigs - the fecundity of life despite every hardship kind of thing. And then there are the captions, defining key moments in the film:

Dedicated to the men and women who planted civilization in the wilderness and courage in the blood of their children.

They have not turned back, those who died; they stay and yet they go forward. Their spirit leads.

And my favourite:
Ten weary miles a day. There is no road, but there is a will, and history cuts the way.

…And history cuts the way? Oh please. Even so they add a certain period charm you might find in any British, Nazi or Soviet propaganda of the time.

Transcending everything however is the luminous photography, the balance between  composition and apparent randomness that gives the film another layer: the documentary. And this I find most fascinating of all: the overhang of history. Damn it all I’m speaking in captions.

The film was made in 1930, celebrating the centenary of the opening of the Oregon Trail. But consider the age of many of the actors. William Phillips who played Zeke, a coonskin wearing grizzled old scout was born in 1864. Another actor, Chief John Big Tree, was born in 1877. Tyrone Power Sr. (admittedly English) 1869. Charles Steven who played the villainous Lopez was a spring chicken born 1893, but then again, he was a grandson of Geronimo.

And of course, Raoul Walsh - born 1887 - and who worked for a time as a cowboy. These were filmmakers born as the Old West was coming to an end, but with parents and grandparents who remembered it well. And that is the authenticity you see in the Big Trail; and the image of the Old West Liverpool kids clung on to as we played cowboys and Indians with catapults  and gas-masks salvaged from World War II
Posted by Mike Keyton at 12:29

The Western is a uniquely American phenomenon. Not unlike America herself. I would also recommend Drums Along the Mohawk and Northwest Passage, both of which scared the piwoden out of me when I was a kid. This experiences were reinforced by the first-person tales of actual Indian massacres during the Colonial Period. You know, children being hung by their heels from eaves and then slammed against the walls of the cabin until their brains burst free.

Amazing! I'd never seen this movie.

You bring up something that always struck me as eerie. That point in American history when the Old West was dying and 'civilization' encroached on the last remaining wilderness. What an oddly sad, transitional period for those caught in between eras.

Crash, I absolutely love that period in American history. Dear God, as a small boy in Liverpool I wanted to wear buckskin! If I still had that desire, I'd probably get some strange looks in some bars.

You played cowboys and Indians with catapults and gas-masks? Now there's posh. I do remember getting hold of a wonderful bow and set of arrows - cheap plastic no doubt - which sent my mother into panic mode. I had to sneak it out of the house while she wasn't looking. Still remember her cries of "You'll have someone's eye out with that...". No harm done, and I seem to recall the arrows tended to drop at my feet. Ah happy days.

Bows and arrows, catapults, home-made tomahawks and spears. All we lacked was a kalashnikov, Shirley. It was so easy to slip into alternate worlds - sometimes a necessity in 1950's Liverpool.

Interesting - learning about a classic movie about the American west from a fellow across the pond. I wish I had some great insight into an old British film so I could return the favor. :-)

Check out Colonel Blimp - a pressburger film. It has a certain period charm. Or the Donat 'Mr Chips'. I'd be interested in your take, Linda.