Why did they burn his damn letters? 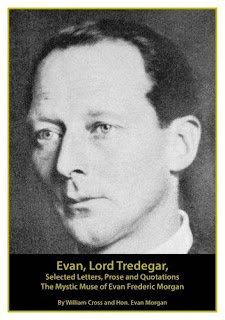 The Murenger remains my favourite pub in Newport. It is quiet, idiosyncratic (in a city that turns idiosyncracy into something worth bottling) and is a refuge for writers, or those who value a silent drink. The two, it must be said, do not go hand in hand, at least on a Thursday afternoon. There two people hold sway, William Cross and Monty Dart; two literary truffle-hounds who’ve been invaluable in the background to my forthcoming trilogy, The Gift, Bloodline, and Bloodfall.

They have turned Evan Morgan, the last Lord Tredegar, into a cottage industry and it’s impossible to avoid their enthusiasm. They scour the arcane: Kew, the Vatican Library, and the private records of the Great Houses in their quest for forgotten letters that reveal more of their quarry.

William Cross’s latest book Evan, Lord Tredegar, selected Letters, Prose, and Quotations, the Mystic Muse of Evan Frederick Morgan is a little longer than its title but packed with insight into the earthy and otherworldly lord. The full story will never be told because his most private letters and other material were hurriedly burnt on his death. Knowing what we do of Evan Morgan it’s easy to understand why.

So what do we have here?

The first part of the book treads familiar territory to those who’ve read the author’s previous books on Evan Morgan. It is in a sense an extended introduction for those new to the man. Having said that there are some new, evocative snippets, such as for example Paris just before and after the First World War.

The real joy of the book is to be found in the letters and articles from Evan himself. I wish there were more. There are poems too. Morgan fancied himself as the reincarnation of Percy Bysshe Shelley. The poems though fail to support the theory.

So what for me were the highlights?

I’d have to include Morgan’s letter to the Western Mail during the carnage of the First World War: ‘War thoughts from Algiers’. It is too long to quote in it’s entirety but to cut any part of it would dilute its purple absurdity, its naïve sycophancy when he praises Lloyd George, and his ‘Geddin down wid de people’ as his article reaches its climax. Perhaps a short quote then: ‘…Do we all fully appreciate him, we of the old country of the mountains? He is one of us…. We are his countrymen, have seen him, have watched him make the name of Wales ring throughout the world. What reward, what show of gratitude can we give back in exchange, we Welshmen…’
We Welshmen—this man who avoided Wales whenever possible in search of sun and young boys.

There are newspaper articles and accounts of his attempt to win a seat for the Tories in Limehouse, with another wonderful ‘Geddin down wid de people’ moment in his lyrical description of the ‘neat’ and ‘smart’ ‘inhabitants’ of Limehouse. He even boasts about dancing with them. As for his purple prosed rhapsody on the eternal glories of Catholicism… Well, the church is a vessel for sinners and navigated by them, too. So no doubt there exists a lifeboat somewhere for the generous, bitchy, idealistic, pompous sexual predator and Satanist: Evan Morgan.
Posted by Mike Keyton at 04:52