There are places I remember 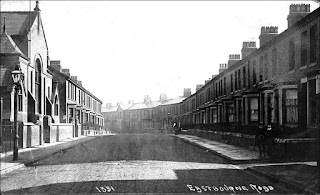 It's a funny old thing but I still dream of my childhood, random streets appearing without notice and hosting fantastical events. The reality, as I remember was more prosaic. The picture above is of Eastbourne Road. To the right, just outside the picture was Robinsons sweetshop. (Newsagents were called sweetshops then) from where I did my paper round. The building to the left was a large, redbrick Wesleyan Church. It was tricky and involved several drainpipes, but you could climb on the roof and . . . do all manner of things.

The picture below is  Heswell Road. Under blue skies, houses like these appeared flat and mundane, but in Irish Sea mist they became otherworldly 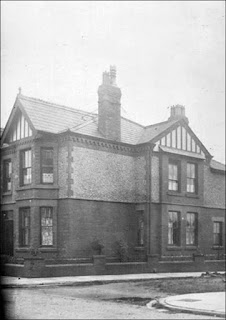 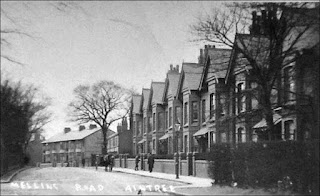 In a quiz last week a question asked which road cut through Aintree Racecourse. Heads swiveled in my direction, expectations hight. For a moment I panicked, until it came back to me. Both pictures, above and below, show Melling Road thought at different times. I like to think that the children below could well have been my aunts and uncles, perhaps even my parents. I dream of ghosts, too. 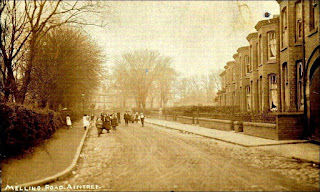 And below is Walton Lane. What still strikes me is how clean and empty the streets were. It was a more leisurely time. 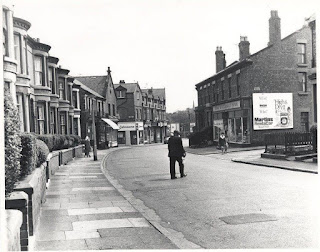 A time when postmen wore uniform 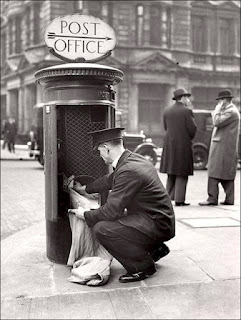 And Park police were issued with Vespa scooters . . .  and were trained how to use them 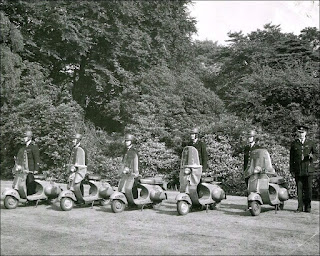 When they appear in my sleep, I usually wake up.

Before I forget, have you spotted the time traveller 'apparently' using a cell phone?
Posted by Mike Keyton at 08:02

I shudder at the things we used to do as kids. The roofs we jumped, the rickety porches, the gangways, and back alleys. Greg had a more adventurous life than I did, me being the apartment dweller, but even apartment kids had our secret passageways and hiding spots.

I'd cringe if my kids had done what we did so I'm glad our parents never found out. :)

You know I'm going to have that Beatles song in my head all day now.

I wish I live close enough to revisit the places where I grew up. I have the dreams but it would be nice to go back and see how they have changed. Or maybe not.

Yup, I spotted him. lol

Maria and Linda, many apologies for the slow reply. The week overtook me.

And yes, without being over nostalgic I think this generation is missing out on a lot, including some key life-lessons. I may have dreamed of 'space age' phones and made do with cans tied to string, but on the other hand there was never a worried parent at the other end telling me it was time to go home. :)

On the other hand they have some advantages we lacked though whether they amount to flim-flam is for another to decide.

Linda If you wish was granted the magic might vanish :) And glad you saw our 'time traveller' : )

I love photos like these. I grew up in Arthur Street, now long-demolished, which was off Rice Lane close to the Queens Drive junction, and like you I find myself haunted by the past. We were extremely poor but I find that now, well into my fifties and living a much more prosperous life in Surrey, I would go back to those times like a shot.

Hi Dave, I'm curious as to how you found such an obscure site, but thank you for the comment. I too, would bo back in a shot - as long as I could find my way out again. I loved my growing up years in Liverpool and go back at least once a year. But I also enjoy my life in leafy monmouth. I'm sure there's a Beatles song that covers this situation too :)