How I drifted into teaching, how I stuck with it for thirty years, still remains a bit of a mystery. Perhaps I just liked teaching history – working with young silly buggers, and on bad days—inertia, the feeling that there wasn’t anything else I really wanted to do.
Marking a register for the first time was an exercise in poetry. Names like Giovanni Ambroselli… Bruno Romola, Rudolpho Velluchi, Mauro Zannotti  rolled off the tongue like incantations, putting me in a good mood for the rest of the day.
Father Hills was a nice entry into teaching and I taught some remarkable boys who’ve gone on to do great things. Things became more challenging when, a year later, we all decamped to the spanking new school adjacent to Tredegar House. The spanking new soon becomes old and it was knocked down some thirty years later. 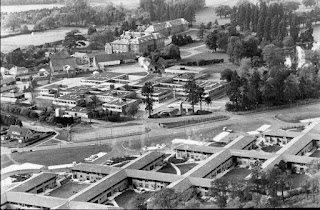 When I got there I found I’d been given the wildest Form in the school - ‘to break me in’ - an elderly teacher told me in a mournful voice . . .
It was Christmas, the last day of term. The weather was wintry, the schoolyard crusted in a thin skin of snow. I was on break duty, looking forward to the holiday starting in two hours, twenty-one minutes, and ten seconds time. A member of my Form came up to me. ‘Merry Christmas, sir,’ he said. He thrust a small bottle of whisky at me. My spirits rose. Just Two hours, eighteen minutes and twenty-one seconds to go— and a bottle of whisky!
In the next ten minutes my spirits rose still further as one by one the boys in my Form came up to me, each offering me various alcoholic drinks, each wishing me a Merry Christmas. Teaching wasn’t so bad I decided.
The bell went and we trooped into the final assembly of the year. The hall was freezing, the central heating having been switched off in readiness for the holiday ahead. I stood there in my woollen greatcoat, its many pockets bulging with bottles. When I breathed, I clinked.
My Form was positioned as usual in the front row - staring up at the stage with their usual intentness. In my first week, I’d assumed they were just keen, inspired perhaps by Mr Witherington’s various homilies. In my second week, as I came to know the Head and my Form, I realised this couldn’t be so. In my third week, I discovered the truth. My Form had a sweepstake on how many times Mr Witherington rocked on his feet as he spoke. Real money changed hands. (An interesting side bet was how many times he said ‘umm’ between words.)
But on this occasion the Head had something serious to say and my heart sank. Boys had brought drink into the school. A boy had been caught sick in the caretaker’s cupboard. Everyone— he stared at my Form in particular— would be searched.
The staff swung away from the walls with the same menacing smiles I remembered from when I was a schoolboy. I tried to ensure they wouldn’t be directed at me and so walked very carefully, aware of every tiny clink. I felt like the Tin Man. My Form stood up, impassive, obedient, their gaze fixed intently on the Head’s shoes.
I patted them down, avoiding their eyes, aware of the smirking behind blank faces. No matter, just over an hour to go.
No drink was found, and I returned to the wall, contemplating an unexpectedly rich and exciting Christmas. The Lord works in mysterious ways. As I walked to the bus stop there was movement behind me, a furtive touch on the shoulder. I turned.
“Can we have our bottles back, sir?”
The optimism of youth.
"What bottles?"  I said

I'm sure you disposed of the alcohol properly. ;)

I'm surprised they had the nerve to ask for their bottles back. You certainly had the perfect answer.

Maria, I toasted each and every one of them 🙂

Those boys brimmed with nerve, Linda 😊