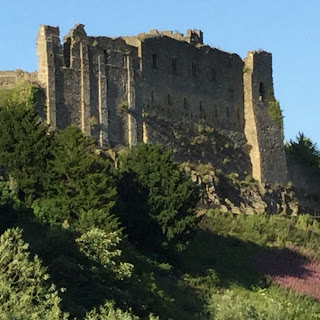 We recently spent a wonderful five days in a cottage that fronted on Easby Abbey and a mere twenty five minutes walk from Richmond. A mere twenty five minutes walk. If that was all. The castle was built on a sizeable hill, virtually everywhere we went was on a bloody big hill —Whitby Abbey with its 199 steps—and only good food and whisky sustained me.

Richmond Castle was built in the aftermath of the Norman Conquest and likely founded in the 1070’s by Count Alan Rufus, ‘The Red.’ He was a kinsman of William the Conqueror, commanding the Breton contingent of the Norman army at the battle of Hastings. In exchange, William granted him lands in the North and estates in the south, which is why today we have a Richmond on Thames.

Protected by high cliffs and skirted by the River Swale, the site cried out for a castle, and the result would dominate the surrounding countryside, Saxon malcontents and the small town built around it. The Earliest masonry built by Count Alan includes long stretches of the stone curtain wall, the great archway in the ground floor of the keep, and Scolland’s Hall. In fact, no other English castle has so much surviving C11th architecture.

I told myself how blessed I was as I trudged up steep spiral staircases to the top of the keep. His grandson, Conan (1135071) successfully combined Brittany with Richmond and vast English holdings. It was in the C12th that the castle as we know it today was built. Now it is a most imposing ruin where red Valerian holds sway. 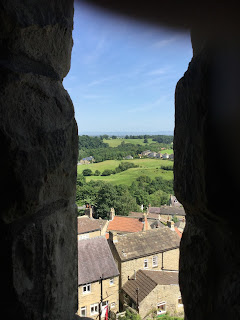 Richmond as seen from a castle window 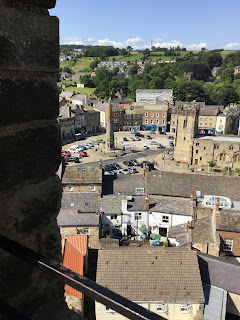 Richmond square as seen from the castle window 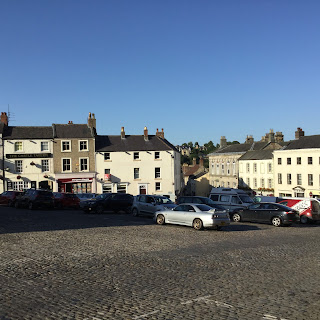 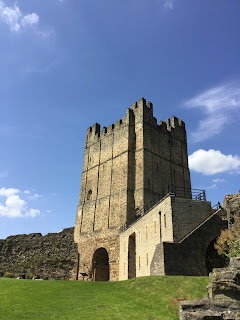 The Keep built by Conan. The arch and the ground level stone work is C11th built by Count Alan. 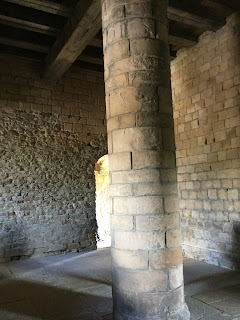 Interior of keep at ground level 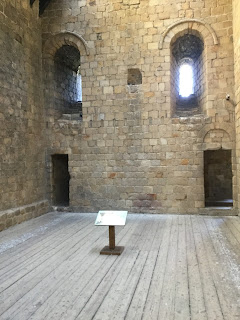 Conan's grand hall some way up the keep 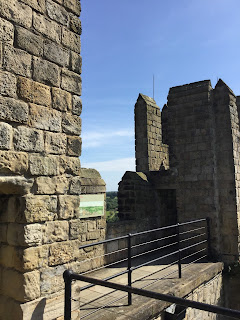 The top of the Keep at last! 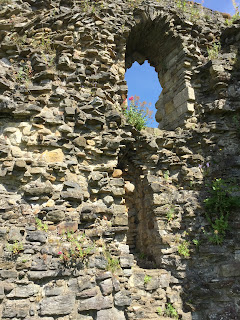 Red Valerian from a distance 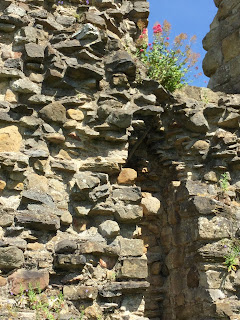 Red Valerian from me balancing precariously on a stone. Just as well it's not armed.
Posted by Mike Keyton at 07:15

Those are great pictures. I love that tough little salvia.

re: walk
I don't think I could convince Greg to walk 25 minutes even if it meant a king's feast at the end.

Maria, I sympathise with Greg, it must be really tough having dodgy knees. Despite my grumbling, walking is one of my favourite past times. - for as long as the knees last out :) It's why I'm in the gym, strengthening the relevant muscles so they can take the strain off the joints. Well, that's the theory. For two days after a work out I'm as stiff as a board. Then just when I'm feeling human again, it's time for the bloody gym. I'm trying to work out the sense in this. :)

Ref Salvia, I thought they wer salvia too, but I checked online and they look more like red valerian. I trust a homesteader - but what do you think?

re: valerian or salvia
It's hard to tell from a distance.

re: strengthening muscles
You are absolutely right. I noticed when I was doing yoga regularly, my knees hurt less. My yoga instructor said it was because I had strengthened the muscles surrounding the joint. There's nothing you can do about loss of bone or cartilage but stronger muscles can support a weakening base.

I'd have broken my neck if I'd climbed any higher :) Anyway, 'Valarian The Red' sounds like a jousting champion so I'll stick with that.

Ref muscles and knees, its all a matter of managing a slow and graceful decline. Well, that's the theory

I love walking around castles, and even at 36 I struggle with hills. But I'm just unfit lol. Thanks for sharing the photos.