Paddington Bear is from Wales

I can be quite careless in giving and receiving gifts. When my daughter asked some time ago what I wanted for my birthday, I suggested a CD or maybe a book. She is a jobbing actor, and money is tight. She shook her head but said nothing more. A week or two later she told me my gift was arranged, an all-expenses-paid trip to London culminating in a meal in Notting Hill.
You don’t argue with my daughter—I did win the occasional argument when she was a toddler—but I tried to defray the expense. Kind friends visiting a relative in Hammersmith gave me a lift as near to Notting Hill as possible. Enroute they ascertained what kind of pub I enjoyed, and I trotted out the usual things: good ale, a fire . . . some books, the last a throwaway remark.
My friend with the smart phone was busy for a time and then exclaimed in triumph: ‘The Eagle, Ladbroke Grove. It has everything.’
And so I arranged to meet my daughter there via text.
They dropped me off about a mile away and pointed to the road I needed to follow. I was glad of the exercise and walked briskly, swinging my canvas bag—eager to see my daughter, eager, too, for the beer and the fire.  Twenty minutes later, with no sign of the pub, the first doubts emerged. I blocked a guy, who otherwise wouldn't have seen me, and enquired about an Eagle pub. He hadn’t heard of it, but whipped out his phone and checked google maps. It took less than a minute and when he looked up there was respect in his eyes. ‘Just up the road, mate. Quarter of a mile turn right.’
Vindicated.
Relieved, I set off swinging my canvas bag more jauntily. And sure enough, there was the pub – the beer – the fire to the right, and a wall lined with books.
No daughter.
Thirty minutes later a phone call.
“Where are you?”
“I’m at the Eagle pub,” I said.
“I’m at the Eagle pub.”
“You can’t be, I said
“I am. Fire to the right, like you said. Book cases. An old geezer sitting near the fire. Thought it was you at first. Tried to convince myself it was.”
Thanks. “We must be in some parallel universe.”
“Not funny. Go ask the bar where you are. Post code.”
To cut the story short I was in The Eagle in Shepherd’s Bush. 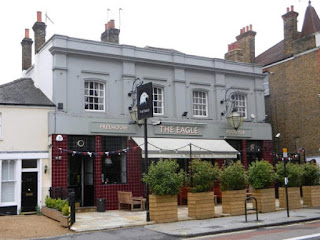 She of course was in the right pub, the Eagle in Ladbroke Grove. 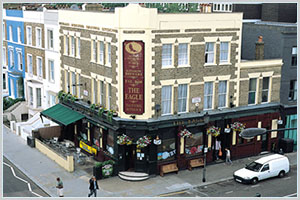 “I’ll come find you,” I said.
“No.” Controlled panic. “Just wait.”
Twenty-five minutes later my out-of-breath daughter arrived and the evening began. I tried to pay for the drinks, London pubs are expensive, and we agreed on sharing, though she triumphantly presented me with a double Talisker just before the final pub closed. The food, Greek, was magnificent and there was still tomorrow to come. ‘A surprise,’ she said. 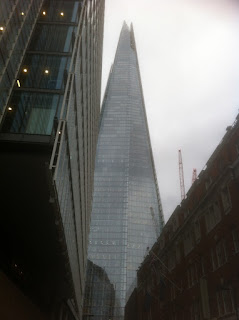 The surprise was a guided tour of Al Jazeera newsroom halfway up the Shard building. Thank you, Oliver Varney. She knew of my obsession with news and how I flitted between news channels, an addict in between fixes. After that it was pleasantly anticlimactic as we made our way to Victoria station for my coach back to Wales. I felt like Paddington Bear on my way home to Peru. We rambled through Borough Market, (bit smelly)  explored the wonderful St Magnus Church*, and enjoyed a final pint at the Shakespeare pub just a stroll away from the bus. 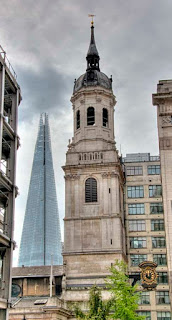 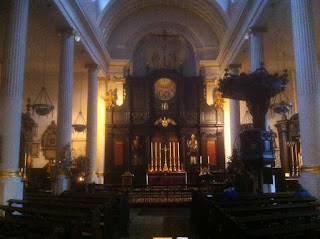