What has happened to the Labour Party? If you don’t like the question, blame John Lennon.


I’m a passionate Brexiteer but don’t bang on about it. There seems little point when you consider political constructs come and go and we’re dead a long time. What I find fascinating are the deep and heartfelt convictions that breathe life into past conflicts. It’s easy enough to understand, on an intellectual level, the arguments that drove the wars of religion, the conflict between roundheads and cavaliers, appeasers and those who opposed them - but what about the passions that fired them?  Present divisions allow us to savour the driving force beneath the dust of historical text.

And speaking of dust and historical text . . . 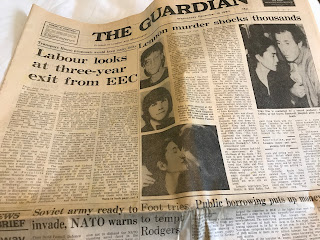 I was doing a spot of tidying,  rifling through some very old newspapers, and discovered The Guardian Wednesday 10th 1980 with two front-page headlines:
Lennon Murder shocks thousands
Labour looks at three-year exit from the EEC
The EEC being an earlier incarnation of the E U of course.

I read on - skimming - focusing on the salient bits:

‘It might take up to three years for a Labour Government to effect Britain’s withdrawal from the Common Market….’

‘The report which suggests that the withdrawal be conducted in two stages, is likely to be published by the Labour Party next spring…’

‘It makes clear that while Labour will go for a clean break with Common Market membership, a future Labour Government would not want to retreat into a nationalistic isolationism…’

‘Significantly, the report insists that the objects of EEC withdrawal resolution passed by the Labour Party Conference in Blackpool cannot be fulfilled merely by repealing those sections of the 1972 European Communities Act which subordinated the House of Commons to the Council of Ministers in Brussels….’

‘The key proposal in the report is that the first step to be taken by the next Labour Government would be “withdrawal from the Council of Ministers from the European Parliament . . . and from other EEC institutions, and abolition of any rights of jurisdiction that the European Court has in Britain.” All of this, it is suggested, could be achieved in six to 12 months and “would effectively mark the end of our membership of the Community.”

‘A second stage would have to follow, during which Britain gradually disentangled itself from “the mass of of EEC regulations, directives, and decisions, and from the complex admininstrative arrangements involved in, for example the Common Agricultural Policy…and also in phasing in alternative domestic arrangements.” ….Withdrawal would also….(make) it easier to establish a fishing regime more to the liking of British fishermen and while the United Kingdom would be denied access to EEC regional development and social funds, Britain would on balance be better off in purely financial terms because there would no longer be any payment to the EEC budget.’

One supposes Keir Starma, Chukka Ummuna, Lord Adonis et al would feel more at home in Mrs Thatcher’s Cabinet than they would have done in the Labour Party of that time. It’s a Topsy Turvy world.