A Mr. Bullock (I’m not making it up) has complained about cows mooing next to his home and as a result, Leeds City Council have set up recording equipment around the offending farm to monitor the sound over a period of twelve months before reaching any decision.

I’m considering making a similar request apropos the seagulls who wake us up each morning between 5.30 and 6 am. What in God’s name are seagulls doing in Monmouth? There’ll be trawlers up the high street next, old ladies slapping their thighs and singing sea shanties. It’s not on. But then a lot of strange things are happening with birds at the moment.

Feral chickens for one. Gangs of feral chickens have been terrorising the island of Jersey. Some one’s counted them. Six gangs apparently, with the largest one amounting to 100 chickens. They also wake up residents early in the morning, wreck gardens and disrupt traffic. Give me cows any day. 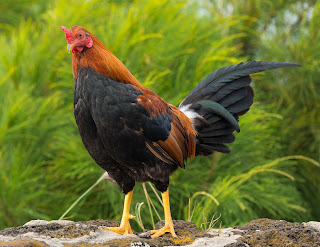 But back on to seagulls. It seems they’ve discovered the joys of urban living, one walking into a Greggs pie shop and walking out again with a bag of crisps in its beak. They’ve also discovered the joys of alcohol, but not as yet cigarettes. In Devon, Dorset and Somerset they’re scavenging leftover alcohol. In Taunton the RSPCA had to treat up to 30 gulls after they were found passed out or staggering around in a boozy haze. One even vomited on a firefighter who was trying to rescue it from a rooftop. They stink of alcohol and rescue vans smell like pubs on a Saturday night. 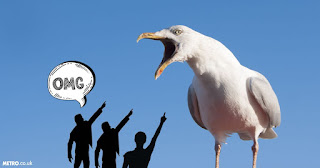 **
Sober gulls, too, are a nuisance. One writer has complained bitterly about incontinent gulls in Aldeburgh. The sea front is splattered with the stuff, buildings caked, even cars if parked for more than an hour. One resident complained: “It’s like the Dam-busters this summer, but with shit.” A follow up letter however put things in perspective. Seagull shit is water-soluble. Heavy rain will soon clear it up. Pigeons on the other hand . . . their plop does not clear up in the rain and has the consistency of chewing gum.

Mr Bullock, are you listening?

But to end with my own Alfred Hitchcock experience. I was walking in Iceland (sorry about that) when an Arctic Tern dived bombed me scraping my head with its talons. Had I been wearing a wig, it would have been gone. Our tour-guide explained why. 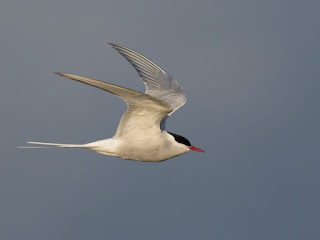 ***
We were walking by a nesting area and Arctic Terns have no time for idiots. They are sometimes called paradise birds because they follow the sun, every year flying from the Antarctic to the Arctic and back again. Thus they enjoy two summers and the longest period of daylight than any other creature. Mind you, whether it’s worth it is debatable, flying 12000 miles there, and 12,000 miles back.

In the Arctic they breed during the period when the sun never sets. I guess, having invested so much in the whole process, they don’t take lightly anyone walking anywhere near their eggs or chicks. Having said that, they keep themselves to themselves, neither mooing, boozing, or shitting all over you, but beware those wearing wigs.

re: Gangs of feral chickens have been terrorising the island of Jersey.

And not one person has thought to make chicken soup out of them? They'd be on my hit list.

Seagulls are notorious for being obnoxious, but I can't exactly blame the terns for protecting their nursery.

Ref Chickens, my thoughts exactly, it's just a shame that seagulls are all but inedible. Pigeons however - a friend of mine living just up the road brought home some fresh pigeon roadkill and turned it into a tasty risotto. And yes, I agree 100% ref the terns, but then I don't have a wig..

I enjoyed this post, but remain gobsmacked over the council that delayed making a decision for an entire year! Wow. Talk about evading responsibility.

The answer is not difficult. If the neighbor is new, then he really has no choice but to put up with the cows. A white noise generator, set to the proper pitch, can even drown out barking dogs. Speaking from experience here.

If the cows are new, then the neighbor may have valid cause for complaint. Depends on the circumstances, really. If he moved into an area zoned for farmland, then I say he has no case.