I had just walked past two aliens and survived. 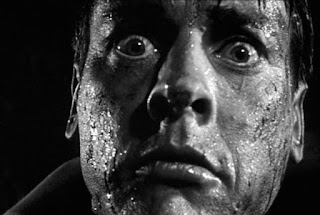 I walked past a man with a face that didn’t belong. This was the conclusion I drew after three cups of coffee and a morning thinking about it. It was a sunny Monmouth morning, and I was walking down Monnow Street when I moved to one side, allowing a couple of indeterminate age pass by.

The woman passed in a blur. Not the man.  Both, though, were tourists; we have plenty of them in Monmouth. Coaches deposit them at one end of town and they’re given an hour to walk up our one main street, check out our charity shops and numerous coffee bars, a pub perhaps and then back to the coach.

These looked like tourists. They walked primly as though wound by the same key, eyes fixed on something invisible ahead, and mouths fixed in a small, willing-to-be-amused smile.

But there was something about the man: his face. It was airbrushed to perfection, tanned to a perfect, pale honey colour, and so incredibly smooth. This may give the impression that I stood in front of him, staring and making copious notes. The fact that it was merely a glimpse reflects perhaps the power of the experience. If a minor deity took on human form he too might have skin as smooth as silk or porcelain with an unearthly honey-coloured tan.

On my second cup of coffee, I started working on his nationality. Had I glimpsed white teeth, the kind that glowed in the dark, I might have guessed American, but with no such clue, I settled on German . . . until I remembered their manner of walking, and that old film, ‘The Bodysnatchers’ came into mind. I had just walked past two aliens, and survived. Either that or the coffee was good. 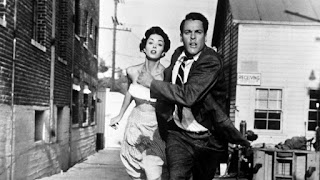 They sound like (Hollywood) Californians which I think qualifies as alien.

I once came upon a photo shoot in Chicago on ritzy Lake Shore Drive. There were these high dollar fashion models on a grungy flatbed truck, posing and pouting. They were incredibly tall and skinny. Their faces were so perfect I thought they were mannequins at first.

I stared for a moment and wondered how shallow our society had become, but then I figured I was working in a windowless office and they were making more money than the President so who was really winning here.

This was 45 years ago. I hope they had a happy life and they finally had a chance to eat real food.

.'I hope they had a happy life and they finally had a chance to eat real food.'--> like battery chickens given a good home.

Your comment about the American glowing white teeth made me smile. My dentist calls them "toilet bowl teeth" because people bleach them until they are as white as a (presumably clean) toilet bowl.

It's gotten so ridiculous that it's hard to find non-whitening toothpaste. Some of the whitening is so aggressive that the skin around your mouth becomes thick with the callouses of repeated mild acid burns.

Tia, this reminds me of Elizabethan toothpaste - crudely put, brick dust and honey. The one an abrasive the other to sweeten the breath. (I'm thinking honeyed breath would be nicer than mint) But of course, like today's aggressive whiteners they destroyed the protective enamel, and white teeth became black :)