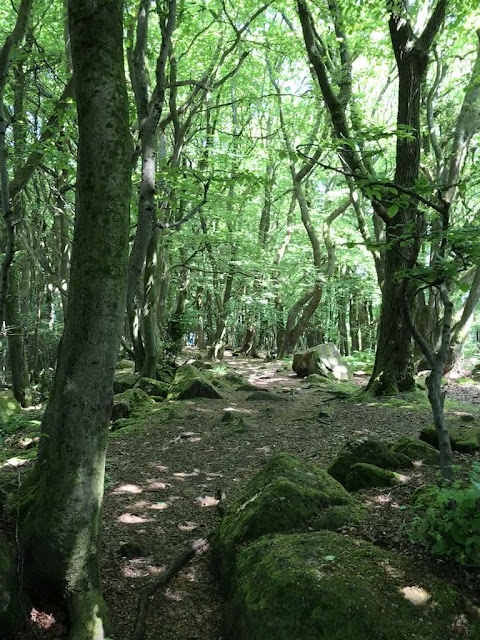 There are more ghostly manifestations along the Shropshire, Herefordshire, and Monmouthshire borders than you can wave a stick at. In the country as a whole, ghostly monks seem statistically the most popular, in border counties ghostly dogs are quite popular too. In Buckholt Wood, once home to three hundred witches, there is, reputedly, a ghostly donkey and, more worryingly a fierce spectral hound.

In September,1961, a local man reported driving through the ghost of a large black dog on the road going through the wood. One hopes for his sake it wasn’t the Cwn Annwn – the Welsh Hound of Death.  We walk through it often enough but so far have seen not even a spectral turd.

None of this was on our mind when we took a walk through the woods around Tintern and got nicely lost somewhere between Buckle and Barbados wood. About a quarter or a mile behind us, we were dimly aware of a small group in brightly coloured anoraks but thought little of it.

Ten minutes or so later, both of us felt a presence around our ankles and legs accompanied by a very audible panting. We assumed the party had caught up and with them a small family dog.

I looked around, prepared to make way on what was quite a narrow path, also aware that my wife was nervous of dogs.

There was nothing. No small group in bright anoraks and definitely no dog.

And yet the panting continued on the path immediately behind us.

And nothing was there.

It lasted for a little while longer and then faded.

And that is a true story. It happened last week. And we have no explanation at all.

Our only consolation is that the Welsh Hound of Death is supposedly quite large, whilst whatever huffled and panted behind us was knee high at most and sounded eager, curious —maybe as to why we weren’t patting it.

On balance, I’d like to think we were lucky, having avoided the Welsh Hound of Death and encountering instead his inquisitive cousin, the Welsh Dachshund of Minor Ailments.

Yikes! Bernadette's fear of dogs is worse than I thought. If a little panting makes her nervous she won't want to meet Odin.

I would've loved that experience though! Every so often we feel the gentle rub of fur against our legs. We'd like to think the dogs who have left us have never left at all.

No, that’s the thing. Nerves didn’t come in to it for either of us. It was sheer puzzlement for something unaccountable and yes, it was a great experience - the third ghostly encounter in my life