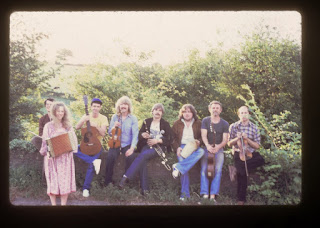 To the left, Lol on squeeze box. Behind her Nigel who played a mean flute, Mike a guitarist, Henry in the blue shirt. Theo a lovely Dutch guy played with us in Irish sessions, and Reg capturing the dissolute cavalier vibe played bodhran and jug. To my shame the other two guys I've no idea. I'm taking the photo.

There are moments of intense happiness in most people’s lives. I have been more than fortunate in friends and events: University, my year in America, my marriage, seeing my children born. And the intensely enjoyable years I spent with the legendary Devil’s Elbow—well, we were big in Abertillery. Our Captain Pugwash hornpipe going down a storm: headbanging and much stamping of feet.

So, with that in mind, I need to put on the record my gratitude to two old friends and founding members, Henry and Lol Lutman. Both from Yorkshire, they enjoyed the Viking propensity to grasp chance by the neck and go where the tide took them and the band. (My scouse propensity is grasping metaphors by the neck) So, in short, they brought joy to my life, and for that I’m grateful.

From small beginnings, as they say: a priest loosely attached to the school heard that a Welsh dancing troupe were in need of musicians. Now, I was not a musician, though I owned a second-hand fiddle bought in a Swansea junk shop for 7 shillings and sixpence. But I was able to pick up a tune very quickly and then later discovered I was better on mandolin. The Welsh dance group—Gwerinwyr Gwent—were the nicest bunch of people you could possibly meet, which was just as well because even the musicians had to dress up, in my case waistcoat, short breeches and long socks. I drew the line at the tall hat and skirt. It was also very good, coming second in the Welsh National Eisteddfod, Henry, Lol and me accompanying them—me the imposter—scared out of my wits and staring at sky when I didn’t have my eyes tightly shut. 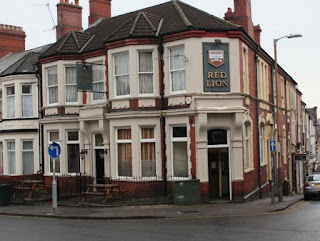 We left the dance group eventually, and over a drink in the Red lion on Stow Hill, Henry and Lol told me they were forming a ceilidh band and would I like to join.

Never say no, however bad you are. I said yes.

And from there Devil’s Elbow was formed, various other band members (mostly guitarists) coming and going over the years.

Self-belief and hard practise work wonders. Weekly rehearsals and much laughter punctuated by increasing bookings on the Ceilidh circuit and then folk clubs. And it was hard practise, the key to muscle memory that allows you to play when you’ve drunk one too many. I still have the cassettes, one with us playing the damn ‘Atholl Highlanders’ ten or twelve times until it was sufficiently tight. And I still have the muscle memory, fingers and mind on automatic even after all these years. 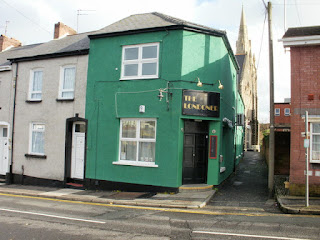 This was originally 'OReillys,' a magical Irish pub that had 'lock-ins' (much better than lockdowns) on a Sunday afternoon. The guinnnes was free for as long as we played

And so, the wheel turns full circle and the joy continues when my daughter a gifted violinist, and a Valkyrie on ‘fiddle,’  comes home from London. She reads music fluently, but possesses the greater gift of being able to play by ear—and the even greater gift of playing Devil’s Elbow

I hope the sound is okay, it comes from an old demo tape/radio interview. As I remember the format was usually one or two instruments playing the opening few bars and the rest of the band coming in as and when. I played the Octave Mandola pictured above. It sounds like a woody banjo bubbling between the violin and guitar - and believe me it's the devil's own job keeping up with a fiddle. I also play mandolin somewhere or other
Posted by Mike Keyton at 05:21

I only caught a few minutes (goat wrangling today) but you guys were really good. Did you ever serenade Bernadette? :)

Thanks, Maria. Goats, the devil's steed. Goat wrangling and Devil's Elbow a marriage made in heaven. Hope you have time to play it loud and do some jigging about the kitchen :)

The previous post has a more reflective piece of me on Mandola.

Ref serenading Bernadette, my wife is most tolerant but not that tolerant :)
You two, stay safe!