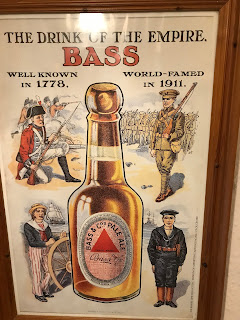 I was drinking tea in a pub (that’s a different story) when my eyes were caught by this wonderfully evocative poster advertising the virtues of Empire and Beer. It brought to mind a dim memory of me as a child celebrating Empire Day in Primary School. It involved lining up in the playground, singing a song I can’t remember and listening to a speech I can’t remember. But I remember we got the afternoon off. So that was good.

It’s not the done thing to celebrate the British Empire, but to my mind it was just one of those things. Recorded history—and almost certainly before that—is one of a ‘dog eat dog’ world, and it will continue to be so in one form or another. The C16th—C19th saw pivotal conflicts between Britain, Spain, Holland, Portugal and France for territory and trade. Islam was engaged in similar endeavours to the east. The Aztecs conquered and enslaved, and the Comanche were no peace-loving hippies.

Part and parcel of conflict and empire are the heroes held up as exemplars for others to follow. The Iliad is a paean to heroism and subterfuge. In Rome we had the story of Horatius defending the bridge against an Etruscan army, and Gaius Mucius  Scaevola burning his right hand in front of the Etruscan king in a demonstration of Roman courage. And it’s no coincidence that Thomas Babington Macauley popularised such stories in his ‘Lays of Ancient Rome’ in the burgeoning years of the British Empire, one that was to consciously model itself on that of Rome. Macedonia had Alexander the Great who conquered half the known world. Sparta had its 300 Spartans who defended the pass of Thermopylae.

And yet from Achilles to Sparta stretching forward to our present time, all heroes have feet of clay. Achilles had a dodgy heel. Sparta enslaved its helots and practised infanticide. So why should we be ashamed of Frances Drake, Hawkins, Clive of India, Wolfe of Quebec, Nelson, Churchill? You take on board their human failings and highlight what made them great or at least significant. It’s akin to prospecting for gold in fast moving rivers.  After hours sifting through pebbles and sand you don’t then throw away the occasional nugget of gold because of the debris accompanying it.

And in British history, the nuggets are more usually found in the common man. Edward III and Henry V conquered large areas of France – but not without the long bows of the ordinary Welsh archer.

The Duke of Wellington, summed up that peculiar balance between the hero and the common man in three separate quotes. Speaking of Napoleon, he remarked that ‘his presence on the field made the difference of 40,000 men.’

And speaking of his own troops he confessed, with some pride, ‘I don’t know what effect these men will have upon the enemy, but by God they frighten me.’

And finally, over a few drinks with his officers and in more reflective mood:

‘people talk of their enlisting from their fine military feeling – all stuff – no such thing. Some of our men enlist from having bastard children – some for minor offences – many more for drink; but you can hardly conceive such a set brought together, and it really Is wonderful that we should have made them the fine fellows they are.’

That poster in the pub brought it all to mind, even the way it exploited the nostalgia of empire and the ‘heroes’ who manned it in the interests of beer. The empire too was an exploitative enterprise, venality and ruthlessness mixed in equal parts with heroism considerable, if perhaps inappropriate idealism,  and the everyday just getting on with the job.

There is one song which sums all of this up: The Soldiers of the Queen, and I always think of my grandfather, Sergeant John Keyton, who died in the Boer War just a week before it ended.

For me, this version carries a strange mix of jollity, pathos, wry regret and pride.

Whereas this version is more triumphalist, very much 'Boys Own' kind of stuff,  the imagery I was brought up on as a child.
Posted by Mike Keyton at 04:39