The Paperback is out, and so is Sheri Lamour 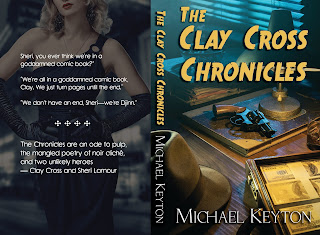 Sometimes Sheri has her own pov.

I smiled at the skeletal face and the now expressionless eyes. I knew a man playing hard to get. I’d written the book on it along with its companion volume: Knee in the Groin. Samedi was pleased to see me. Caribbean deity or not, he knew a good thing when he saw it. Clay, on the other hand, he was looking even more troubled.

“Why’s he here?” The two of them were staring at my legs. I crossed them out of habit more than anything else. Samedi’s cigar glowed as my skirt rose an inch. Creep would have combusted had the damn thing risen much farther.

Samedi shifted the cigar to the side of his mouth. “We’ve unfinished business.”

Sometimes she comes to the rescue

A shadow blocked the lamp lighting the front of the alley, and I swiveled pumping lead into the pink, hairless bodies that ran at me. Two brought me down, and I gagged on their stench, desperately twisting my neck as fangs glistened drool. Two shots rang out. A manicured hand pulled off one of them. Pumps, with diamanté sequins and four-inch heels kicked the other away.

She stood, silhouetted against the lamp on the corner, a shadow no longer, but Sheri Lamour.

“I could have managed,” I said, pulling myself back to my feet.

“Sure,” she said. “Jacko would have put up more of a fight.”

Sheri knew about these things. When she wasn’t polishing her nails, she read or fixed her face. Penny Dime

Sometimes she loses it.

Sheri said nothing. She walked slowly towards him pausing once to pick up a cleaver from the long wooden table.  I glanced to where Murricane stood who shrugged and then nodded. McBride turned away. Thalsson’s followers did much the same thing, retreating to the edge of the unseen perimeter that currently bound them. Thalsson just stood there with that same stupid sneer.

The sneer lingered for a second and then vanished as Sheri lost it, hacking into his skull, his temple and throat. He raised his hands as some form of protection, and she hacked at them too. Then she aimed lower into his shoulder and flanks, Thalsson no longer human but meat to her rage.

After a time, he stopped squealing, and I heard only panting, the thudding of blade into bone as Sheri continued unable to stop. In the strobe-like flicker of lights losing power, she resembled a demon splattered in blood, the same blood that streaked walls and ceiling and covered the floor. Finally, exhausted, she stopped, stepped over what looked like minced meat.  Bunga Bunga

But she is always Sheri Lamour