When I was a young teacher, I organized several school trips to Stonehenge, Avebury and Silbury Hill. Much can be said about the history and geology of these impressive monuments but what remained indelibly burned in my mind was the Red Lion Hotel skirting the Avebury stones. The days were always hot, the sky cloudless and blue, the sun burning strong. But, young and irresponsible though I was, with fifty odd twelve-year-old children to look after, common-sense told me I couldn’t slope off for a quick cheeky pint – or three.

The Red Lion has history too. During the English Civil War, the inn was run by Florrie and her soldier husband. While he was away fighting, she took a lover – to her husband’s irritation when he unexpectedly returned home. He shot the lover and slit his wife’s throat, throwing her body down the well followed by a large boulder. Her ghost reputedly haunts the 400-year-old building, to the extent that some guests have refused to stay more than one night after seeing ghostly shadows in their room.

You can imagine my delight and my wife’s puzzlement when on a recent visit to the Salisbury area, I discovered the Red Lion was still there. Life, like the stones around us had turned a full circle and I had my long-delayed pint. I didn't mention the ghostly Florrie. 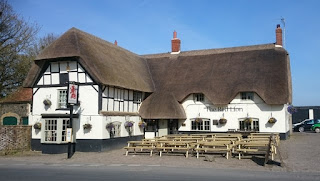 Stonehenge was also still there as it has been for the last four and a half thousand years, so too Silbury Hill, and my favourite, the Avebury Stone Circle which encloses an entire village. The village was less impressed. In the early middle ages, egged on by zealous clerics, the villages tried to get rid of what they saw as the Devil’s work. Unable to destroy the actual stones, they ceremoniously buried a good number leaving large gaps in the circle. The stones fought back, one toppling over and breaking a helpful stranger's  back. Three hundred years later the body was found under one of the buried stones, along with three coins dated 1320-1325, 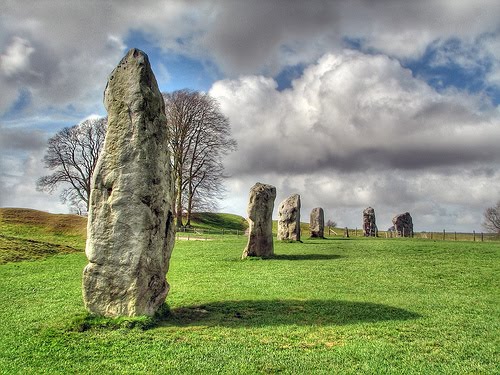 Despite the gaps there were stones remaining  to impress the antiquarian John Aubrey when he found them when out hunting. Writing in 1649 he compared Avebury with Stonehenge, the former being a great cathedral, the latter a mere parish church. He wouldn’t recognize it now with its manicured lawns, teashops, tourists and gift shops. He would though have made a beeline for the Red Lion. 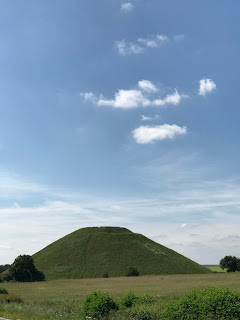 Our students loved Silbury Hill, a race to the top obligatory.  It had survived for four and a half thousand years and had once been a Saxon hill fort facing down marauding Vikings. Its purpose remains a bit of a mystery, as is the exact year it was built.  But if we’re vague about its purpose and the year the first clod was dug, we can possibly narrow it down to the month ie early August—the wings of flying ants having been found in its base. Others dispute this arguing that earthworm excrement is the key to accurate dating. What fun these fellows have. And why not add to the general merriment?  In terms of the volume of material moved—nearly 9 million cubic feet, it’s equivalent to the smallest of the three pyramids of Giza.

And so, to the ‘parish church’ – Stonehenge. 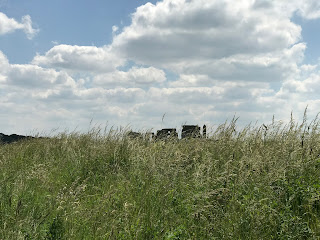 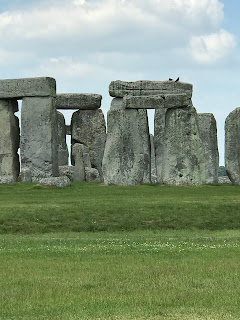 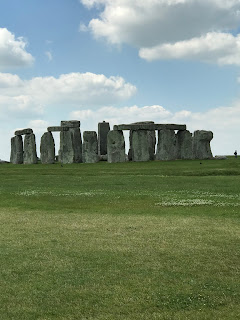 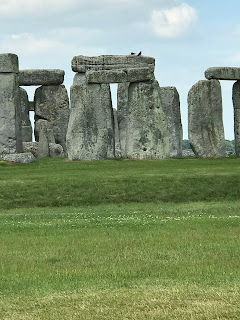 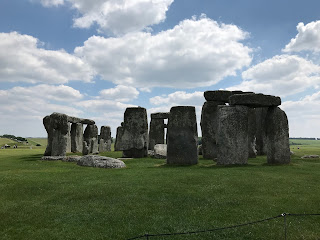 It's still pretty awesome, though now visitors are kept well away. To my mortification, glee, and embarrassment the commentary coming through English Heritage headphones informed me that visitors are now kept away because of past damage from school trips. Surely, they weren’t talking about me and St Joseph’s Academy of Young Ladies and Gentleman?

Whatever the case, Silbury Hill and Stonehenge have become museum pieces sans uniformed guards. Avebury though remains free range. You can’t fence off a monument larger than the village within it.

Avebury from the air showing how easy it is to walk around the village. 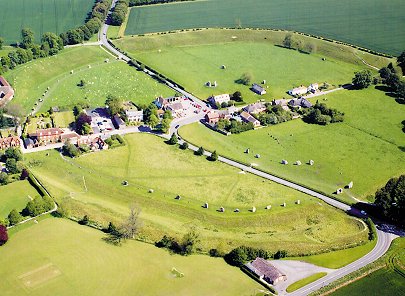 A picture of the outer ditch and stones from ground level 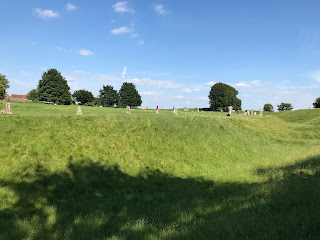 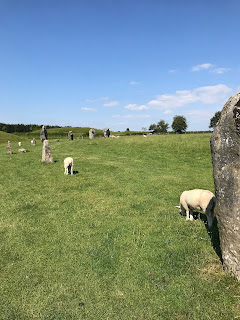 It was a very hot day, sheep are intelligent and stones have their uses. 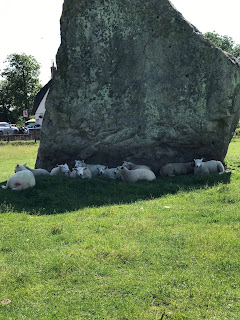 And at the risk of boring you silly, and because I'm now done with Old Sarum, Salisbury and Stone circles, four pictures to round it all off. 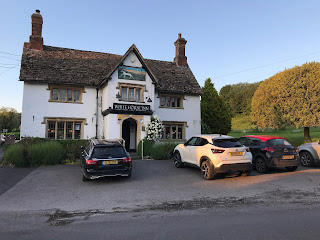 The inn we stayed in 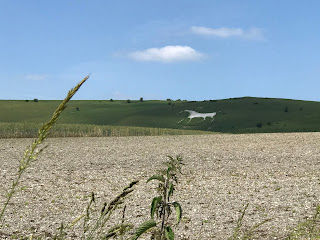 Why it was called the White Horse 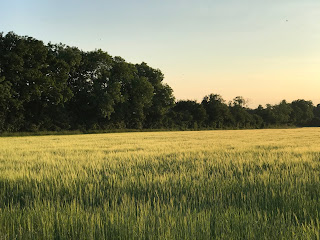 Even the fields are quite mystical 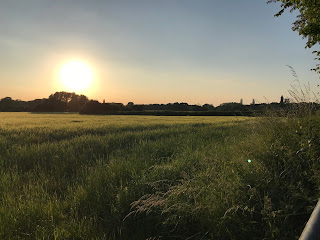 Someday I will visit England (and you and Bernadette!). Though at covid rate, it might be quite a few years more. Last I heard, they're pinning a couple more years until things relax.

I had heard that Stonehenge was off limits now. Not quite the same as being able to touch history.

I sincerely hope you do, Maria. We'd treat you like potentates : )