A bottle of gin and a very large straw

To this day I don’t know what happened in Alien, other than a brief and disturbing image of something reptilian erupting from a man’s stomach. We were sitting in the Odeon off Chepstow Road in Newport, Lol Lutman, myself, two bottles of gin and a packet of straws, though we only needed two. The cinema was warm, the straws seductive, and we sipped with the same thoughtless compulsion as those eating popcorn close by, only considerably quieter. Long before the film ended I was floating like a baby, in gin rather than amniotic fluid, wondering when and who would deliver me.

Nothing like that happened in America. Checking my diary, I note that on January 11th I saw ‘Reds’ in Manhattan with John Scanlon, Chariots of Fire with a girl called Kathy on the 30th January, followed by a drink in Pub 74 where we overheard ‘love-talk’ from a late middle-aged man to a seventeen year old girl. It was better than the film.

My last excursion to the cinema (or Picture House as we used to call them in Liverpool) was on 28th May when I saw ‘Conan the Barbarian’ in Flushing. Something brushed against my leg. I assumed it was a cat. I don’t know why. Either that or a very short woman. Then I saw two rats gamboling down the central aisle. It was an afternoon matinee, so presumably they got discount. I spent the rest of the film with my feet resting on the seat in front, eating popcorn guardedly and wishing for a bottle of gin and a very large straw. 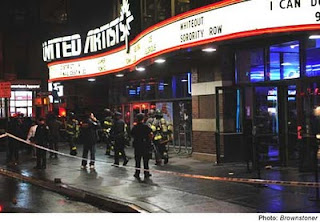 The cinema in Flushing sans rats.
Posted by Mike Keyton at 04:50

Ref: Then I saw two rats gamboling down the central aisle.

It must have been a better movie than I remembered. LOL!

I don't share my space with rats--and I avoided dating them too.

A larger rat was guarding the door. He looked at me as I stood up to go and grinned, his teeth gleaming like tombstones. I sat down again and dreamt of gin, wondered maybe whether it was catching up on me.

"I don't share my space with rats--and I avoided dating them too."

Why would you think of dating them
Maria? :)

I vote for a very short woman because that would be so much more interesting... :)

You mean they don't watch cinema and eats everything? ;)

No, I mean they don't interrupt every five minutes asking you what's going on, and they don't demand much in the way of gourmet meals - a bag of popcorn and she's your's for life...although I haven't got round yet to sexing a rat - you wouldn't want to give a male rat the wrong idea.

PS 'Sexing a rat refers to sussing out what sex it is - not having sex with one - just in case language differences gave you the wrong idea about my proclivities :)

Phew, just as well I explained then :)