I can't be doing with bugs 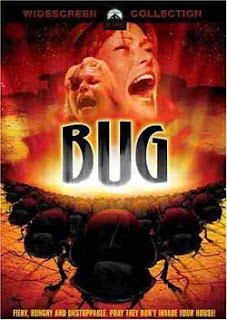 There are forty tons of insect for each person and large parts of the world already eat them. In fact Bangkok is not only famous for Lady-Boys; it’s the insect eating capital of the world. And they’re imaginative rather than choosy: silkworms, scorpions, tarantulas, water-bugs, crickets, red ants – especially red ant eggs - praised as an alternative to Caviar.

The guy presenting the program was an excitable zealot, extolling the virtues of insects as food.  I imagine the early Christians must have been pretty much the same, though it is hard to imagine they could have been any more enthusiastic. The Second Coming - okay as it goes, but nothing to how insects taste on a plate. He stared into the camera, piling fact upon fact.


They reproduce quickly; one cricket laying a hundred eggs a month.

They are twenty times more efficient than beef in converting food into body mass.

They need little food or water to sustain them, and don’t emit sinful greenhouse gases.

Eating them will save on pesticides...antibiotics.

In 2050 there will be 9 billion people on the planet. We will have to eat insects then. He said that with glee.

I worked out that with a bit of luck I’d be dead.

I mean, I’m all for cultural diversity. I have no objection to Aborigines eating honey-ants as an alternative to pop-corn, or indeed Witchetty grub paste. I saw a documentary showing an African tribe netting water-flies in their thousands, and turning them into weird patties that resembled black-pudding. They pan fried them and the sizzle sounded appetising enough, but when they smiled there were bits of fly on their teeth. And, as we all know, the French have a penchant for snails.

No. To each their own. What bothers me is the suggestion that we should all be going down this route because what that means is that the rich will continue to eat salmon and beef while the rest of us crunch on MacInsects.

And condiments - what about them?

Deep fried crickets, once you get over their deep-fried baleful eyes, apparently taste like chicken flavoured crisps. So Ketchup and that weird American mustard might find a place in the new cuisine. But what about horse-radish sauce, mayonnaise, mint sauce, and mustard? What about vinegar...red current jelly...celebrity chefs?

And do we buy organic and free range - or factory? And what about animal rights? Just when we’ve started liberating chickens from undersized cages, are we going to replace them with vast, noise-some cricket farms on the basis that insects prefer it that way?

I was drowning my 'what-abouts' in beer, and pondering on the future of cross breeding: The Aberdeen Ant. The Tarantula Longhorn, when, all of a sudden, the nightmare faded, and then vanished. I saw this on you-tube and the world settled back on its axis. I recommend this clip. He’s a great lecturer and talks with the quiet authority that convinces. But what would I know? I’m a townie. It’s up to my frontier friends to tell me whether he makes any sense. I hope so. I can’t be doing with bugs.
Posted by Mike Keyton at 09:44

Thanks for the giggle, and the gross-out. I hope I don't live long enough for crickets to become a dietary staple. I don't think I could do it.

Nah, when you're a best seller you'll be rich enough to eat beef!

Thank you, Mike. I've been trying to cut down on my snacking and reading this post very effectively killed my appetite. I may bookmark it for whenever I feel hungry.

Farmer Maria here. I listened to the TED talk in its entirety. Not only was I taken by the speaker's humility in acknowledging he had made a mistake, but I was blown away by his findings.

I had known grazing and rotating livestock (and plants) was necessary and beneficial in a small scale, but I had no idea you could multiply that equation into something very much larger.

Thank you for sharing this.

If the government takes over processing of the deceased with dermestes maculatus larvae, soylent green isn't far behind. Parts is parts.

I'd have absolutely nothing against eating insects. Fried, roasted, candied... yummy. :)

Linda, that's a great idea. Maybe I can self publish it as a dieting aid.

Maria, I'm relieved the clip passed the Zannini code : ). He did convince me, and like you, I really did appreciate his humility and quite gentle manner.

Crash, dermestes maculatus larvae, Stop giving me headaches. One more thing for me to find out about : ) Ref Soylent Green I'm thinking 'Today horsemeat - Tomorrow...?' (that last reference may not make sense outside of Europt, I don't know.

Vero, You're a strange woman.: ) But thanks for the shout-out on FB. I think that man's message should be more commonly known, too.